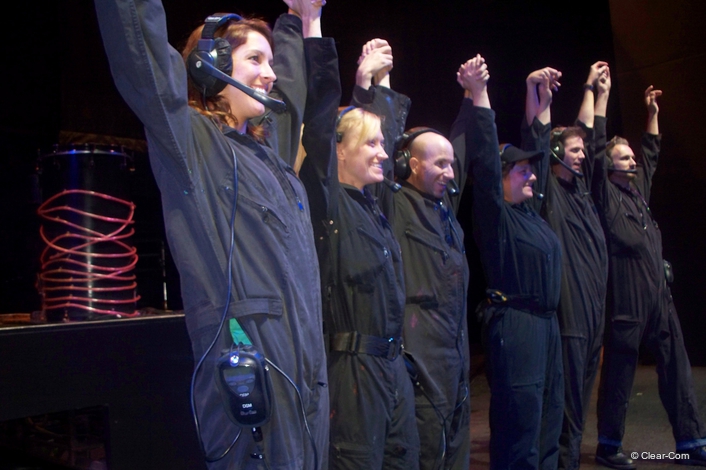 From day one, Clear-Com’s CellCom helped the Blue Man Group Las Vegas production team overcome a challenge it had been experiencing with another brand of wireless intercom — RF interference. As the CellCom operates license-free in the 1.8-1.9 GHz frequency band, it immediately resolved all interference issues. The show’s production manager and technical supervisor, who first learned about the system through an in-house demo conducted by Clear-Com representatives, were also impressed by the system’s flexibility and overall ruggedness.

The CellCom system is highly customizable

“The exciting venue and Las Vegas location of this Blue Man Group show allows it to be bigger in scale — both in technology and design — than in other locations,” says Antonio Garfias, Audio Head of Department for Blue Man Group Las Vegas. “We required a very robust wireless intercom system to ensure that the adventure happening on stage and the themes of communication, interaction and technology highlighted in the show are delivered flawlessly to our audience, and CellCom has delivered this for us. I am extremely impressed with the reliability and overall ruggedness of the system, along with the customer support, which is the best I’ve ever experienced.” As Blue Man Group’s show features a large crew that rotates on a nightly basis, it was also important to keep the show’s communication systems as simple and easy to use as possible. The CellCom system is highly customizable, allowing the audio team to assign different channels for the six to eight team members that use the system on a nightly basis, seamlessly connecting them for specific show cues and improving efficiency. In addition, crew members are able to work together to customize their beltpacks, selecting a preferred position for options including sidetone, overall gain and alarms. CellCom also easily integrated with the show’s existing party-line intercom system.

The show’s behind-the-scenes workflow is improved

“The versatility of the CellCom system has rendered it a must-have for such a wide variety of events, from live theme park attractions at Universal Studios Hollywood to major theatrical productions such as Blue Man Group Las Vegas,” says Bob Boster, Director of Sales, Americas and Asia Pacific at Clear-Com. “We are pleased to see that the CellCom system has truly improved the show’s behind-the-scenes workflow, completely eliminating their previous interference issues and ensuring they have a seamless communications solution for this world-renowned visual production.” In addition to the CellCom digital wireless intercom base, Blue Man Group Las Vegas uses Clear-Com’s CC26, CC95, CC260, CC40 and CC60 headsets. The equipment setup also includes three antennas on the stage level and one antenna on the basement level of the theatre for the stage managers who escort the performers to the stage. The Clear-Com equipment is used for two nightly shows, seven days a week, as well as for rehearsals and special events.