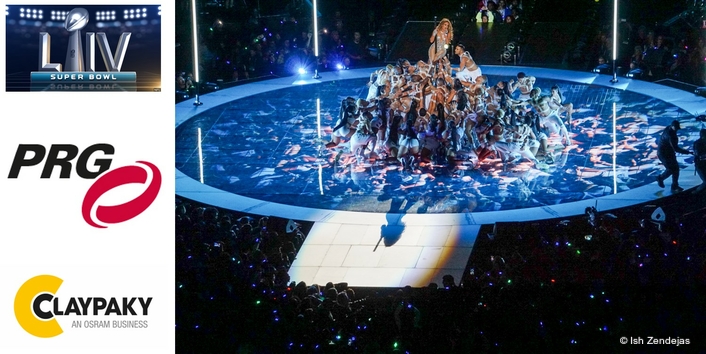 Claypaky Xtylos laser source moving lights made their Pepsi Halftime Show debut at Super Bowl LIV where they added even more impact to the dynamic performances of Shakira and Jennifer Lopez in Miami’s Hard Rock Stadium.  Xtylos created a network of intense beams in varied colors as well as wave effects that served as a background for the stage. 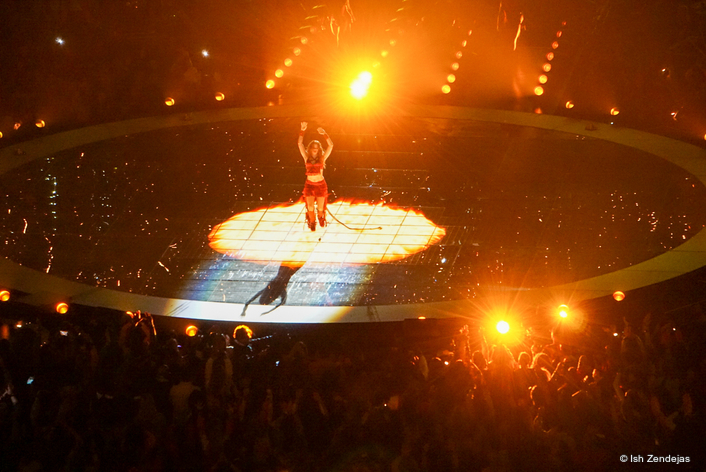 Lighting Designer Bob Barnhart of 22 Degrees, who has 21 Super Bowl halftime shows to his credit, selected 50 Xtylos for the event after seeing the fixtures at LDI 2019.  “I was impressed with the beam quality, which was so pure and consistent in intensity from the outside edge to the center,” he says.  “Xtylos was incredibly crisp and clear; its really hard edge intrigued me and stayed on my mind” as the halftime show took shape. 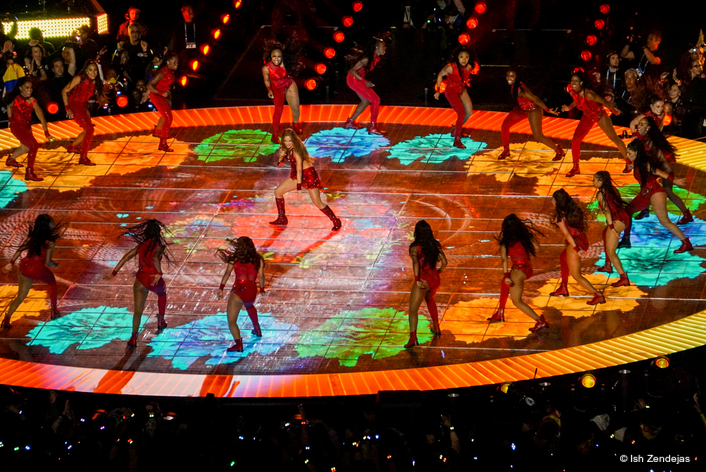 “It takes a special breed of person to use a brand new product on a project like this.  Bob and his team have the incredible talent to make the fixtures look amazing and also the intestinal fortitude to use a completely new technology on live television,” says George Masek, Claypaky’s Strategic Marketing Manager for Entertainment Lighting Solutions in the US and Canada.  “I’ve been fortunate enough to have fixtures debut on three Super Bowl halftime shows with 22 Degrees, and I can’t think of a bigger event on the world stage each year.  The halftime show was the highest-profile usage of Xtylos to date and the first for a worldwide audience.  Bob embraced our new Xtylos fixtures to create something exceptional.” 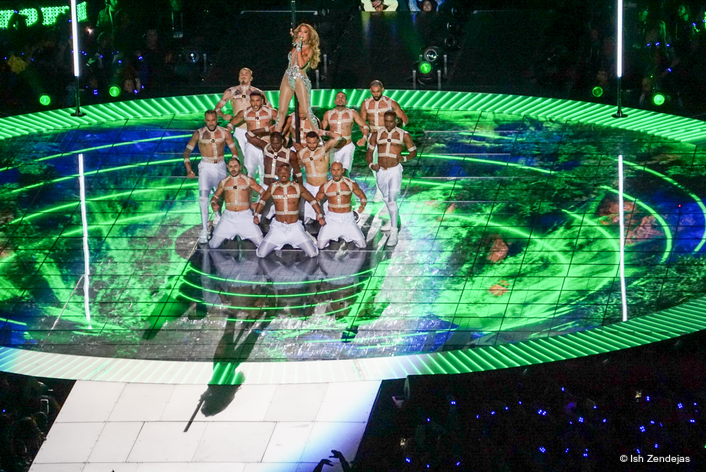 The Hard Rock Stadium features a permanent truss position on the field at the upstage wall, which is “a good position for instruments to create a good background,” notes Barnhart.  “I kept coming back to considering the good tight, clean beams of Xtylos.  There always had to be something in the background that was consistent – whether it was a straight shot or a cross-shot I needed to create a width and consistency in the background.” 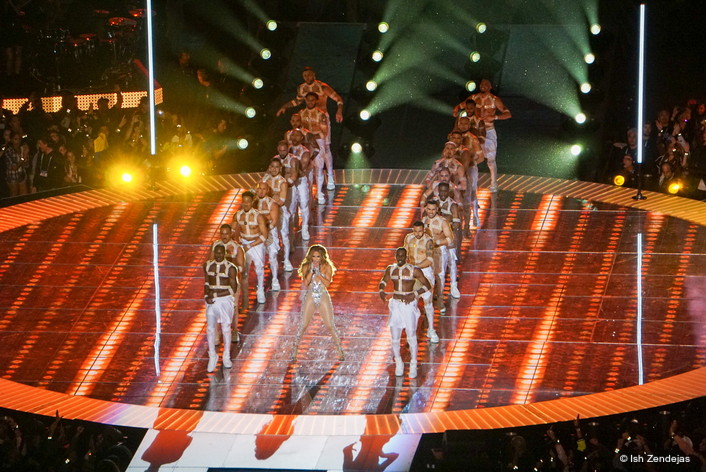 Barnhart opted to mount 50 Xtylos on the ground-supported truss set against the front row of the audience to form a background for the stage.  The fixtures were utilized in conjunction with PRG (Production Resource Group), which was the lighting vendor for the production.

“I wanted to run Xtylos as tight and crisp as possible to make for the best graphics in a full range of colors, including pastels,” he says. “Claypaky deserves a lot of credit for harnessing this very unique laser engine in a lighting instrument for the entertainment sector.  It was fun playing with something so new!” 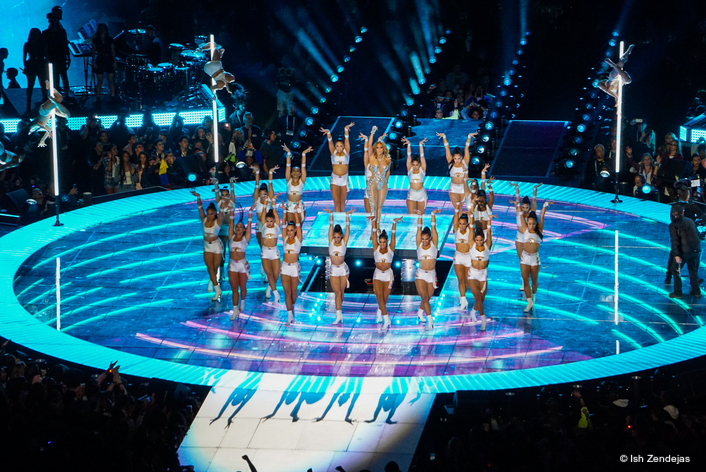 The lighting designer is known for using “a lot of newer instruments, especially on the halftime show,” but doesn’t feel he’s taking a risk by “working only with very reputable lighting manufacturers who will support any issues that might come up.  Claypaky is always super-supportive of anything we do outside the box.”

Barnhart was very pleased with Xtylos’s performance.  “They did quite well,” he reports.  “The smoke moving in the air upstage showed them to even greater advantage – we got everything we wanted from an atmosphere standpoint.”  He predicts he’ll use Xtylos for other projects.  “Xtylos is a graphic fixture so when I find the right purpose for it, it will be a great choice.” 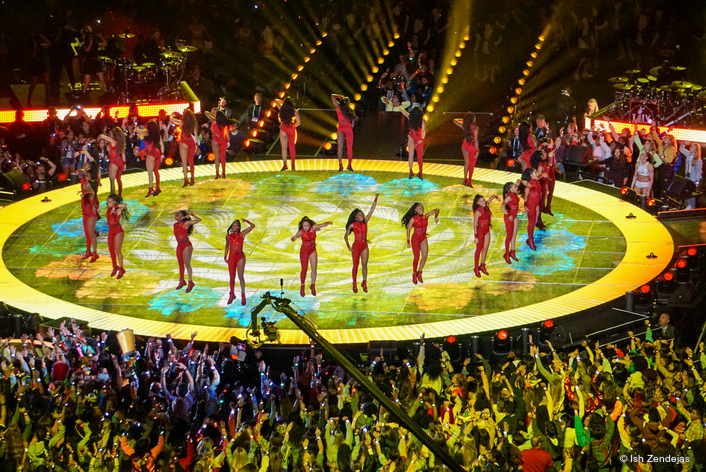 “Bob and his team were masterful at taking Xtylos and making it look amazing in its role of supporting the show,” says Masek.  “Many people reached out to us to ask if there were 100-200 Xtylos there.  That only 50 were used is a tribute to the artistry of Bob and his team.”