Claypaky on stage with Emma 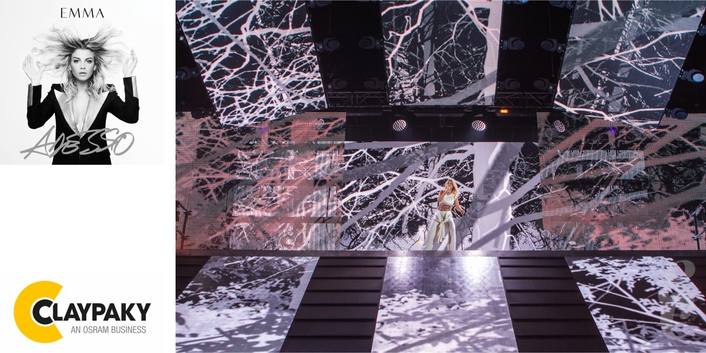 Emma Marrone's Adesso Tour 2016 stopped off at all the major sports halls on the Italian peninsula, along with a dynamic stage installation and an interesting lighting rig put together by lighting designer Mamo Pozzoli. The Claypaky A.leda B Eye K20s were most impressive and stole the show with stunning features. They are top performance wash lights, breathtaking beam lights, and spectacular, original visual effects generators. Their unparalleled versatility makes them an extremely interesting creative tool for all lighting designers.

“I used the A.leda B Eye K20 massively. Let's say they played one of the leading roles in the effects during the show," which was entirely produced by Emma together with Luca Mattioni.

The dynamic set structure, various scenes, moving video surfaces, video and visual content, music, choreographies, and lighting design "are properties of the show's visual design, consisting of side-lighting, illuminated details, silhouettes, areas ‘burned’ by the lights, shadows, light and shade effects, and back-lighting.” All these elements become living material for the director and the lighting design.

The classic requirements of a lighting plot were borne in mind, including the kinds of lights to choose on the basis of the primary roles they have to play, such as key lights for front-lighting the leading players on the stage and lighting the audience, and diffuse lighting, ambience lighting and tracers. However, "in this project, I wanted lights which could ensure high performance on the effects front, so I went for Claypaky A.leda B Eye K20s to have units that would actually offer several possibilities.”

The A.leda B Eye K20s were designed as powerful, versatile wash LEDs, and they were used a lot as back-lighting, as colour washes, and as a basis for settings, scenes and coloured backgrounds. They were chosen precisely owing to the characteristics of their optical units, with a zoom that ranges from 4° to 60°, colour temperature correction tools, colour control, and individual control of the light parameters of each LED.

“They have an electronic array for creating very spectacular dynamic visual effects, which is the reason for the success of this light. However the array must be understood and used with moderation. As all my colleagues that use A.leda B Eye K20s know, you can even get lost in the hundreds of effects available.”

All the parameters of every LED pixel may be controlled! And the B-EYE K20 has introduced a totally innovative feature: the front lens may be rotated to create lots of small light compositions, which may be opened and closed like petals. By adding colour and dynamic graphics, the B-EYE turns into a unique effect light, capable of generating countless visual effects, unlike any LED luminaire before it. 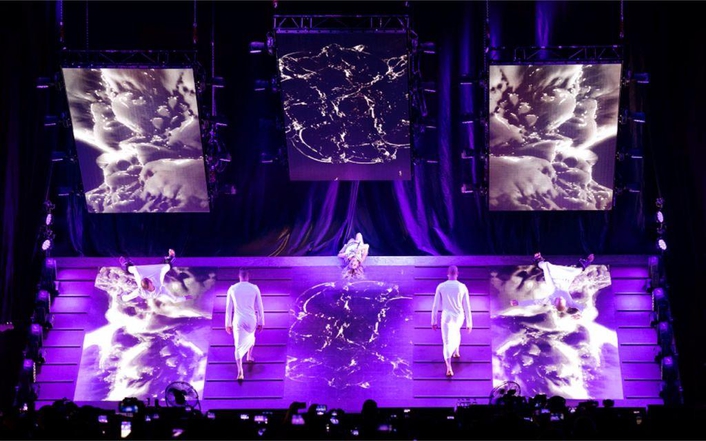 “I had to make some aesthetic choices. I worked out how they could be used in my show idea, and I pushed very much in that direction. I created morphing effects and animated structures within the individual LEDs on the light, by playing with the zoom and playing with the alternation of the double colour effect possible with this unit. I adjusted the colour of the master and background to generate a whole host of effects that somehow, in my head, were able to represent a continuation of the visual world.”

Mamo Pozzoli generated visual effects with movements with the A.leda B Eye K20s that were entirely consistent with the changes generated by the videos at the same time, precisely in order to represent a single world of colours, movements and shapes. This generally very complex operation succeeded particularly well thanks to the twenty-four B Eye K20s Mamo could control.

“Their most classic arrangement is as back-lighting. There were six lights at the back of the stage. However I used some of the lights on a slope in the wings. Although they were at the sides, I often used them as key lights and front lights on the artists who were in that particular part of the slope (dancers and often Emma herself).”

Using the powerful, bright B Eye K20s was a true challenge.

“I really enjoyed looking into the effects mode in order to use the B Eyes as key lights. They were very close to the people on the stage. Through the use of different intensities and partial use of the LED modules with moving shapes, many of the choreographies were lit with side lighting. This is an unusual, very theatrical approach ... it is hard to see the powerful B Eye K20s illuminating details of the scene or movements with small, selective beams of light.”

The concert actually opens with a B Eye K20 that illuminates Emma behind a cloth: a single moving B Eye K20 pixel! It was an extreme choice, quite unlike anything you would see on TV!