"I needed versatile lighting tools to maintain a diverse range of looks and keep the audience absorbed in the performances," says Larikova. "Alfa Future People celebrates innovation, love and the future. The rig needed to be state-of-the-art and high-tech to reflect this ethos, whilst able to produce beat-perfect visuals that would keep up with the music and translate both well on camera and also in situ." 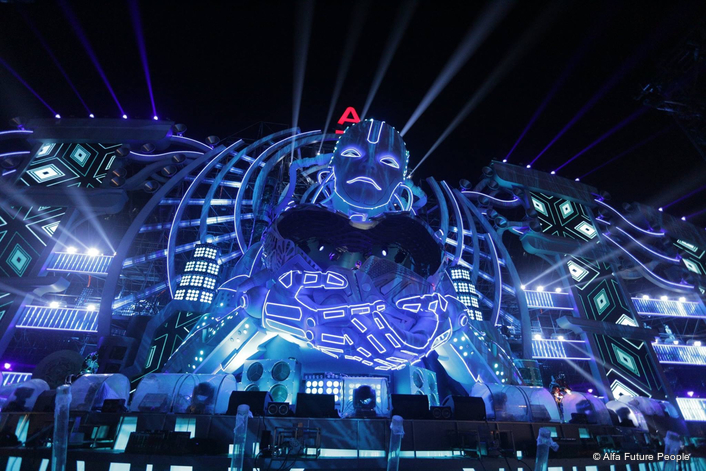 Larikova realised her high-impact design through a mix of 22 x SuperSharpys, 40 x Stormys and 73 x Sharpys supplied by Russian rental house Light Logic. The design was a result of painstaking pre-programing and visualisation techniques that resulted in an almost two-day non-stop acid-test accurate show that had audiences stunned.

Larikova rigged 22 SuperSharpys of the fixtures along the highest vertical of the stage's rig. Using the fixtures' 24 /28 DMX 512 control channels and advanced programming features, Larikova created architectural light shows that extended the length and breadth of the festival's main stage. Narrowing the fixtures' 0° to 4° adjustable beam angle, Larikova was able to intersperse the SuperSharpy beam underneath those of the show's lasers to create looks that reached right over the audience.

"Claypaky products are undoubtedly the best devices for creating punchy, scenic lighting designs," says Larikova. "They possess a great brightness of beam which is needed when working with large amounts of space and LED video display."

Larikova rigged 40 Claypaky Stormys, the brand's cutting-edge LED strobe, in formation behind the stage's 18 giant LED screens.  The Stormy's high-end technology allowed Larikova complete control of the frequency, duration and intensity of the fixtures pulse meaning she could integrate the light with the music, video and set in a way that unified the elements. 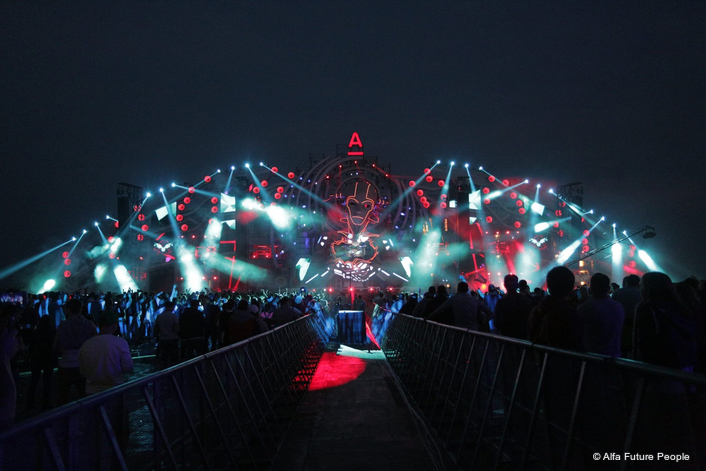 "I like the Stormy very much," says Larikova. "The unit has great colour mixing, bright halftone and an incredibly fast strobe so it can create some great effects."

As well as having to find fixtures that were high output and versatile, durability was another key factor for Larikova. Held in the countryside surrounding the Russian town of Bolshoye Kolzino Alfa Future People's open-air setting held some challenges.

"One of the biggest concerns was the extremes of weather and temperature we experience here," says Larikova. "The festival is held in an outside environment and one moment it can be raining and the next extremely hot.  We needed devices that were weatherproof and that would not over-heat in the afternoon sun as temperatures can rise to 33 degrees!"

Larikova selected the Claypaky Sharpy - a sturdy, lightweight fixture that offers exceptional weatherproof functionality through the addition of the Claypaky Igloo, a tough UV-resistant transparent polycarbonate dome. The Sharpy's in-built cooling system meant that Larikova was able to confidently use the fixture both day and night without pressing concerns of the fixture's overheating. 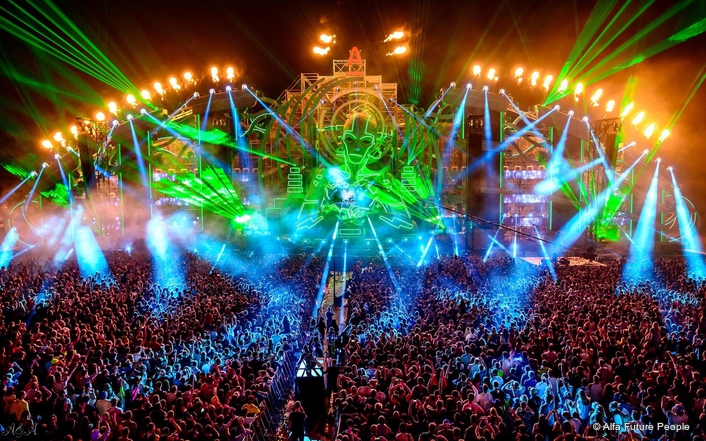 "Claypaky products are hugely reliably in difficult weather conditions," says Larikova. "This durability coupled with the brand's drive for innovation and versatility means Claypaky fixtures will be lighting the way for designers for generations to come."