Claypaky is on the ‘A Team’ for Ed Sheeran world tour 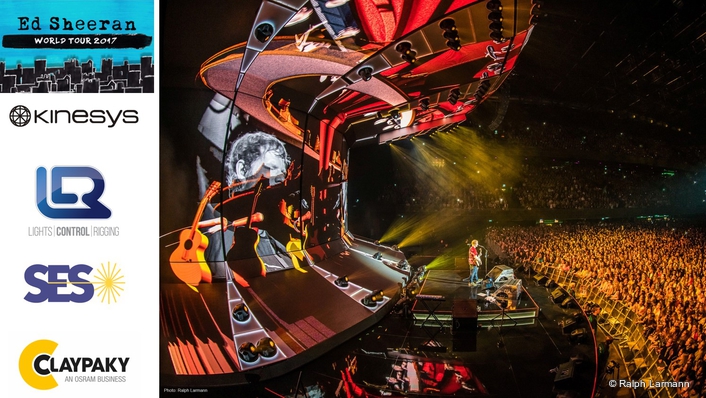 The Claypaky Scenius Unico and Claypaky Mythos2 have been selected by award-winning lighting and production designer Mark Cunniffe and lighting director Matt Jones as the workhorse fixtures for multi-award-winning artist Ed Sheeran in his current record-breaking worldwide new album tour. Cunniffe has been working with Ed since the artist began touring in 2011, developing a close creative partnership that has evolved over time as the star’s music has spread to reach international acclaim.

“The first thing that we created for Ed was so small it fitted into the back of a truck,” says Cunniffe. “Since then the shows have grown to reflect Ed’s natural career progression. For this tour, we wanted a show that could go from arena to stadium. We wanted it to play as wide as it possibly could.” To achieve this, Cunniffe designed a goblet-shaped set, fondly named ‘the chalice’ by the designer who worked closely with Production Manager Chris Marsh and Jeremy Lloyd from international technical production practice, Wonder Works, in blue-printing the construction of the concept. The chalice comprises five curved video screens that begin at stage level and run up a central stem to flare out to create a live stage ‘ceiling’ of video and light before curving upward again to form a top rim. The structure was engineered by Tait Industries. 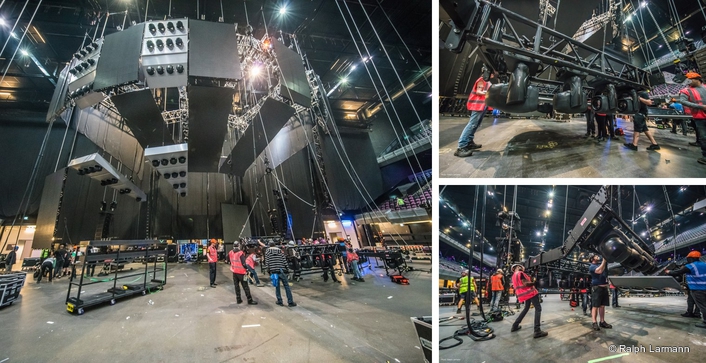 Between each of the video screens forming the chalice’s ceiling is a triangular pod – there are four in total - containing 10 Mythos2. Each pod moves in and out of the set via a Kinesys system recommended by UK rental experts Light Control Rigging (LCR). LCR, operated and owned by Mike Oates and Ryan Hopkins, worked in collaboration with US outfit SES to supply all the lighting fixtures, control, cable and crew for the duration of the World Tour.

“The new Clay Paky fixtures are brilliant,” says Oates. “They are very reliable. We needed fixtures that were tough and durable and able to withstand getting shipped all over the world. The Claypaky range have a wonderful colour mixing system and consistent bright output across all fixtures which helps give the show the impact it needs.”

Cunniffe also cites the size of Claypaky fixtures in being instrumental in his decision to select them, “With the Mythos2 I knew I could hang the fixture on its side,” says Cunniffe. “It is relatively light and it can fit through an aperture. I can hide 30% to 40% of the unit behind the structure and you just see the aperture and the lens. It looks as though it’s built into the production, as opposed to being hung on it.” 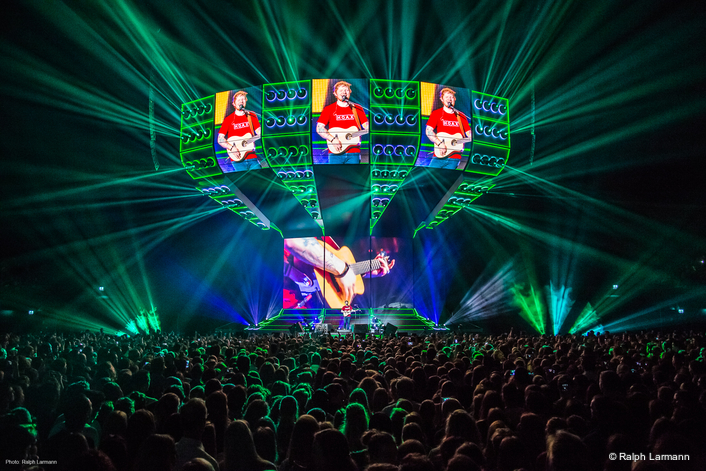 On working with Cunniffe, Oates remarks: “Working with Mark has been an absolute pleasure. He is a true professional at the top of his game. His vision and ideas are incredible and he gets across what he wants so well that it takes away some of the stress of bringing his design to life. With LCR being such a young company, it’s a fabulous opportunity for us to show what we can do. We love a challenge and this certainly has been one! Working with Mark and Claypaky has been a wonderful start for us as a young, fresh, ambitious company.”

As well as supplying the 128 Mythos2, LCR supplied the 32 Scenius Unico, 16 of which are hidden in the mother gird in four trusses of four, with a further four fixtures positioned on either side of the stage. 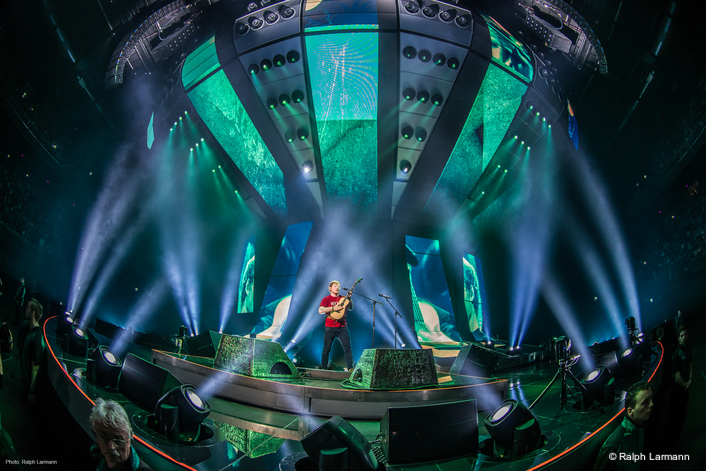 “When the lighting pods come in, upstage of that are four linear trusses with 24 of the Scenius Unicos that shine through the holes,” says Cunniffe. “However, you can’t see source, as the source is 56ft high. What you can see are the beams of light. It’s a secondary level of lighting that’s not visible.”

Discussing why he chose Claypaky’s multi-functional Spot and Wash light, Cunniffe says, “The Scenius Unico is the midpoint between theatre and rock and roll, so it has a bright beam, it’s at least twice the size of the Mythos and it has full shuttering. I think the Scenius Unico is a fantastic stadium profile, because it’s so bright and has such an advanced shuttering system. It just has a bigger presence.” 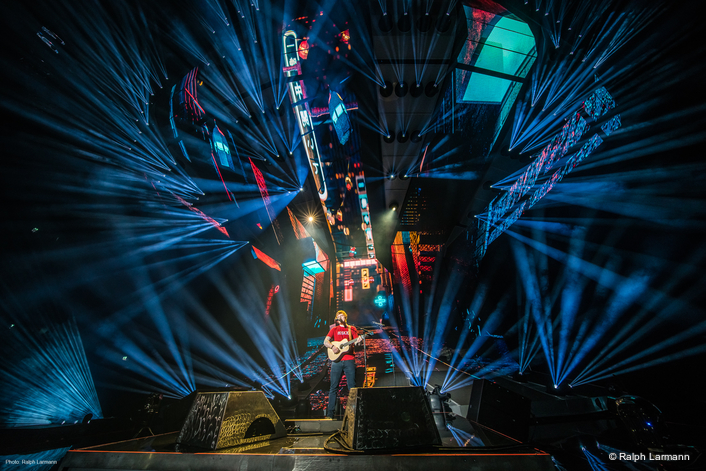 Adding to Cunniffe’s reasoning behind the selection of the Scenius Unico is Jones who, as the tour’s lighting director, is in direct contact with the units nearly every day.

“What is useful about the Scenius Unicos is that they offer us a dynamic output; they can go from a wide flood to a narrow spot,” says Jones. “The fixture’s shaping system also allows us to go wide with the fixture and still trim down the horizontal plane of the beam.” 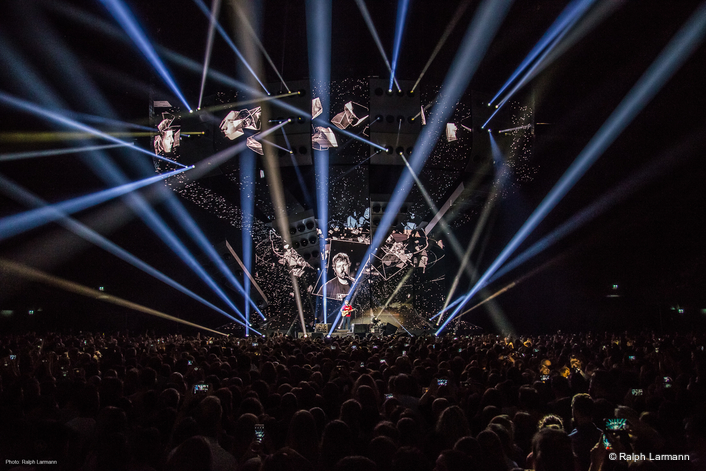 Lastly, in order not to undermine the production’s attention-grabbing video content created by Montreal-based Moment Factory and Bristol, UK-based Shop, Jones and Cunniffe were keen to access fixtures able to provide a smooth and reliable dimming curve, devoid of any flickering.

“Ed is just one man on stage with a guitar, so what happens on stage in terms of light and video is extremely important,” adds Jones. “The audience would notice an imperfect dimmer curve. The Mythos2 dimmer curve is doing a great job of being uniform. It does well down at the low end, and it does well quite high too. Overall, equipment-wise it’s been a pleasure to work with the Claypaky fixtures - they just have great dynamics.” 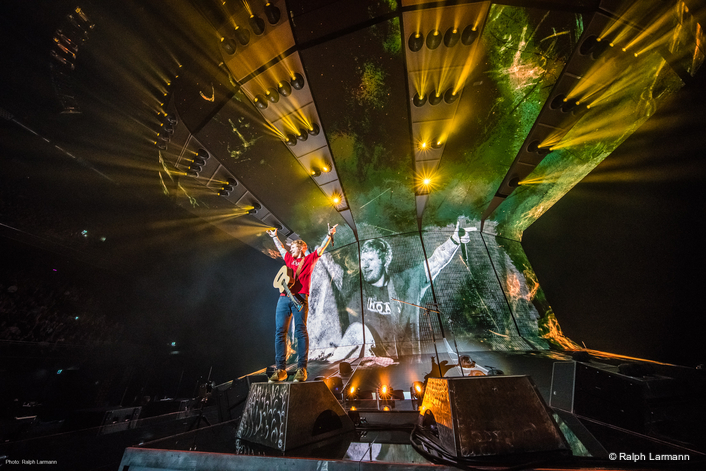 Cunniffe agrees, “They’re a great bunch of people at Claypaky, and they’ve designed some really good products. They asked me for my input when designing both the Mythos and the Scenius Unico. I worked closely with Francesco Romagnoli, Paolo Dozzo and Marco Zucchinali at Claypaky who listened and incorporated my resulting opinions into their final product design, for which I will be forever grateful.”

The Ed Sheeran world tour is currently in South America. Following his headline slot at Glastonbury 2017, the US leg of the tour will commence in Kansas City on 29 June. The artist’s third studio album, Divide, has reached number one in 14 countries.