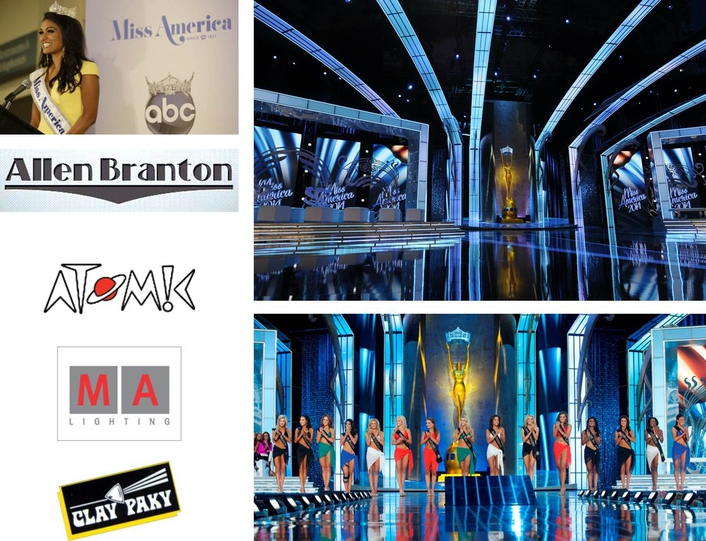 Looking good: grandMA2 meets Miss America
The Miss America pageant returned to its Atlantic City origins this year and lighting designer Allen Branton was charged with lighting the cavernous Boardwalk Hall and making sure 53 beautiful women looked their best whenever the TV camera turned their way. He was aided by Clay Paky Sharpy and Sharpy Wash fixtures from Atomic Lighting in Lititz, Pennsylvania.

Branton marked his sixth consecutive year lighting the pageant, which was televised on ABC-TV.  After spending a number of years in Las Vegas the show moved back to Atlantic City where “the venue, audience and scenery doubled in size,” he reports.  “Given the size of the hall and way the show was set in the room, every single element of production had to be rigged from overhead – and there’s no permanent rigging infrastructure. So there were 240 individual rigging points for lighting, sound, video, scenery, cable management, cameras.  Atomic provided and managed all that, which we hadn’t needed in Vegas; their attention to detail is second to none.”

Programmers Felix Peralta, Kevin Lawson and Laura Frank utilised 1 x grandMA2 full-size, 2 x grandMA2 light and 2 x grandMA2 fader wing. Peralta was responsible for programming the scenic and effects lighting for the show, Lawson the key contestant and audience lighting, and Frank the media. “We carved up the show into three different aspects of lighting design, but all the consoles were networked so the programmers could work independently or collaboratively,” Branton explains.

Kevin Lawson praises grandMA2’s “fantastic multi-user capacity,” something he and Peralta took advantage of, and the system’s expandability. “We can keep adding universes and not hit a ceiling,” he says. “And grandMA2 doesn’t slow down based on the number of fixtures and parameters you use.”

Branton mounted 24 Sharpys on truss for “Miss America 2014.”  “Sharpys are a dramatic little effects light for music and variety programming, particularly for their size and cost,” he says. “They’re a wonderfully fun and dynamic tool.  In beam arrays they add spice and energy to the Sharpy Washes.”

He also employed two dozen Sharpy Washes as utility and backlights positioned on truss in the gaps formed by the finger-like arches that created a ceiling over the stage.  “Having a light with that much output in that small a physical package came in handy,” he says.  “The Sharpy washes provided a nice delicate array of light for 53 women who needed a hairlight from the overhead zone.  I’m glad we had them.”

Branton notes that while “the faces of the 53 women competing change” over time, the Miss America pageant is remarkably consistent in its format and goal. “People tune in expecting to see these women in (quite literally) their best light; we never know which ones will be in close up.  So we have to make their close-up photography really consistent woman to woman, act to act, show to show, year to year,” he says.

Francesco Romagnoli, Clay Paky Area Manager for North and Latin America, comments, “It’s great to see our lights on such a high profile program with one of the best designers in the business.  We’re proud that Mr. Branton loves them so much.”