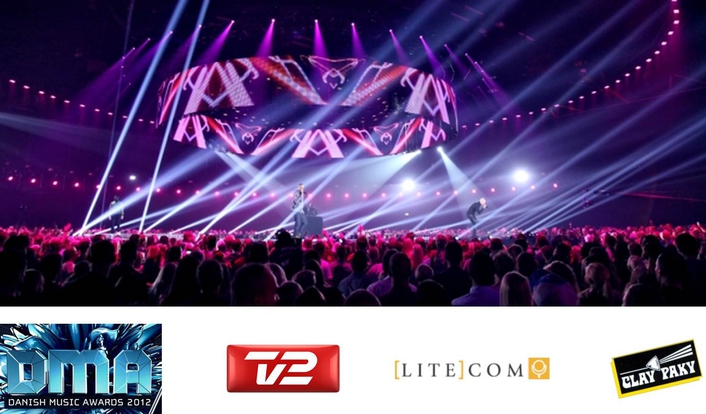 .
Clay Paky Sharpys have helped Denmark celebrate its finest music with a stunning lighting design for the Danish Music Awards 2012 by Kasper Lange.

Lange specified an army of powerful, pure beam Sharpys – known for their small footprint but staggering output – to create an array of incredible effects, including a semi-circle surround of bright, red beams to envelope Danish singer Aura as she performed her hit ‘In Love with the World’.

The Sharpy has been my favourite profile fixture ever since it was launched, and has been in my designs for all my TV shows ever since then,” says Lange, who has worked on many of Denmark’s most high profile music events. “I needed a small profile fixture that was able to cut through the massive number of wash lamps and videoscreens, and the Sharpys are very stable, aggressive little work-horses. They deliver the best beam in the business - every lighting designer’s dream.”

The Sharpys were supplied by Copenhagen-based Litecom, which also has offices in Stockholm, Sweden.

We have 70 Sharpys in stock right now – right from the start we could sense the demand for the luminaire and took in around 30 units, which increased rapidly,” says Litecom CEO Rasmus Bremer. “It’s a fantastic luminaire, quick to service and maintain in a good condition, it delivers more than enough in the terms of a mid air effect - spot on! Nice size, weight and very nice housing.”

The Danish Music Awards took place in November in the capital’s 8,000 m² Forum exhibition and concert hall, which offers a capacity of 10,000, and was televised by the Danish station TV2.