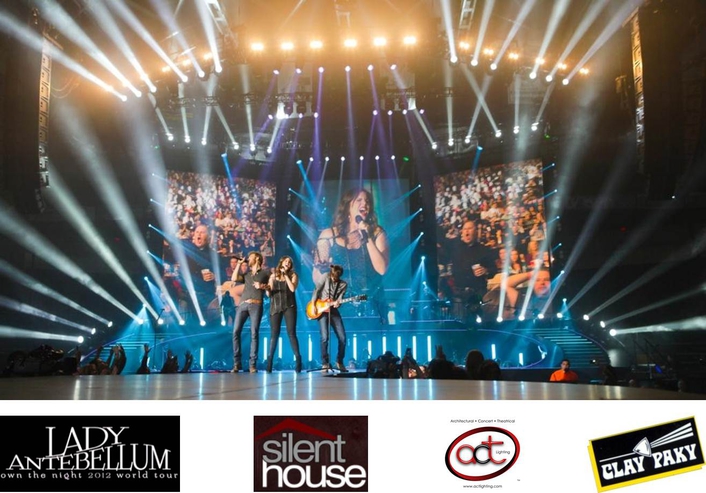 .
When country trio Lady Antebellum wrapped the North American leg of its We Own the Night World Tour earlier this summer the band had played to a total of more than one million fans.  Two dozen Clay Paky Sharpy fixtures helped light up the successful tour, which recently concluded with three dates in Australia.

Lady Antebellum debuted its third studio album, also called We Own the Night, in September 2011.  It debuted atop The Billboard 200 making it the band’s second No. 1 release.  It went on to top the magazine’s Top Country Albums and Canadian Albums charts.

For the tour, creative director and designer Baz Halpin along with Chris Nyfield of Silent House delivered the band’s concept of a fan-centric experience by creating a stage which placed a portion of the audience inside the center of the stage area so Lady Antebellum could “immerse themselves in the audience and vice versa – the audience essentially became the backdrop of the show.”

Halpin’s goal was to keep the lighting complement’s truck count low.  “We were carrying our own rolling stage, so that meant we needed a compact but powerful lighting system,” he explains.

The stage was designed with three 18x24-foot fast-fold projection screens upstage and four vertical hard ladders, containing 24 Sharpys, between them.  “The Sharpys provided the power and dynamic punch,” says Halpin.  “Their intensity coupled with speed gave us the ability to create a variety of looks.  The main function of the Sharpys was to highlight the musical cues and dynamics.  We used them both as gobo fixtures and as a soft wash with the frost in place.

"In terms of truck space, weight, power and cost the Sharpys ticked all the boxes.”

Halpin reports that the Sharpys performed “very reliably” on the tour.  “They have been consistent on all the shows we have done.  We constantly experiment with placement and position, but you can use such a versatile fixture almost anywhere.”

Francesco Romagnoli, Clay Paky Area Manager for North and Latin America, comments, “Baz is a big fan of our lights and we’re please to see that he’s specified them for this tour as well.  It sounds like the Sharpys provided the look he needed.”