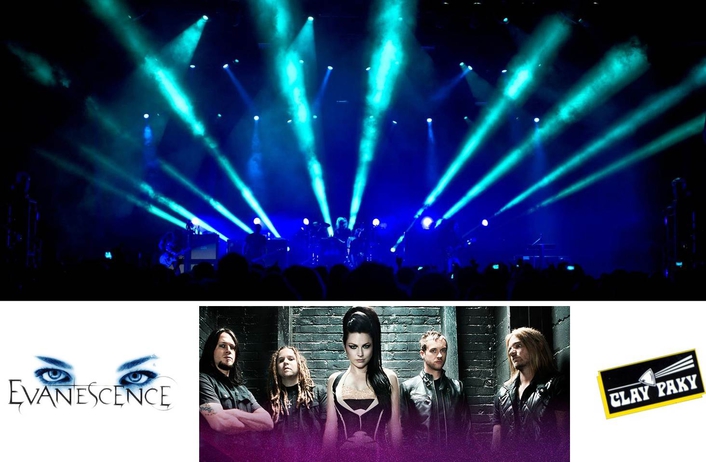 The core element of the show is the back lit backdrop
Clay Paky Sharpy fixtures are making their mark on the Evanescence Tour, the world tour by American rock band Evanescence in support of their eponymous third album.  After a successful start to the tour in the US last year, the band, with frontwoman Amy Lee, is currently playing to packed houses in Japan, Hong Kong, Indonesia and Australia.

Lighting designer Dan Hardiman of UK-based THC Design is using more than a dozen Sharpys as part of the upstage floor lights.  He positions them in pairs on draped cases and utilizes them for aerial lighting effects and to back light the band.

“Amy Lee is very creative; it’s great to work with an artist who wants to be involved in all the creative aspects of a live show,” says Hardiman.  “The music has strong contrasting elements: Amy’s soaring angelic vocals, the crunchy guitars, the haunting piano sections, the ethereal orchestral accents.  So it’s important that the light show reflect the juxtaposition between them.”

He reports that, “all elements of the lighting design have been chosen for their impact and compact stage footprint.  Downstage on the floor are several vertical auto-truss towers full of wash lights for my side wash.  Upstage are several five-foot towers with wash lights to back light the band.  Between these are pairs of Sharpies for aerial effects and low beams.  The roof is a standard rock ’n roll layered truss rig with PARs, ACLs, moving lights, blinders and strobes.”

Hardiman notes that the rig has had several incarnations, depending on the type of venue from stadiums and arenas to more intimate theaters and clubs.  He boosts the number of Sharpy floor lights if the stage is bigger than 50 feet wide.

The core element of the show, he says, is the back lit backdrop, which was adapted from Amy Lee’s idea of recreating the album artwork: the band’s name with lights coming from behind it.  Hardiman figured out how to achieve this with soft goods and a huge gobo of the band’s logo.  The band does not like strong key light and is kept fairly moody, a look that Hardiman balances with intensive moving light effects.

Hardiman was introduced to Clay Paky Sharpys last summer on the Goo Goo Dolls USA shed tour when he chose them as a lightweight fixture whose beam he could see in daylight.  “I had 17 of them around a motion-controlled horseshoe truss,” he recalls.  “I fell in love with them, as did everyone who saw them.  We did a few indoor shows, and their brightness, movement, speed and color temperature made them stand out from the rest of the rig.  They held their own happily against 1200W fixtures and greater.  There’s no other fixture that offers a similar impact with such a compact size and weight and low power.”

Having had a positive experience with them on the Goo Goo Dolls tour,  Hardiman says, “the Sharpys were the obvious choice for me to use on Evanescence as the floor-beam fixture.”

During last summer’s Goo Goo Dolls tour only one Sharpy required servicing in six weeks, he notes.  “They are performing great on Evanescence.  We have a 100 percent success rate currently.”

On the US legs of the Evanescence Tour the Clay Paky Sharpys were provided by Epic and LMG Touring.  A.C.T Lighting is the North American distributor for Clay Paky.

Francesco Romagnoli, Clay Paky Area Manager for North and Latin America, adds, “We’re pleased to see the Sharpy on so many Rock and Roll tours internationally and we’re glad that Mr. Hardimann is having so much success with the fixtures.”