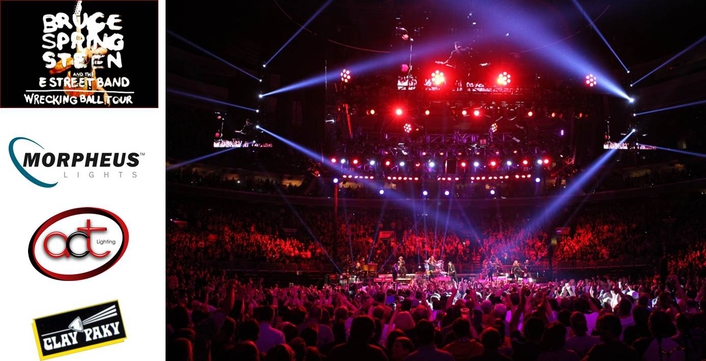 The Wrecking Ball World Tour kicked off in the U.S. this spring in support of The Boss’s 17th studio album, “Wrecking Ball.”  Springsteen’s lighting designer Jeff Ravitz selected 16 Sharpy fixtures for his inventory after having seen them last fall.

“In putting Bruce’s tour together I thought the Sharpys would be an excellent replacement for the lights we were using inside the set platforms to push through,” he explains.  “I thought they’d be a nice change with a really defined and distinct look.  The Sharpys also allowed us to use some great gobo patterns”.

When Ravitz added Sharpys the idea came up of using hazers to paint the air and enhance the lights’ sharply-defined beams.  Employing hazers – which are not all as singer-friendly as the MDG Atmospheres Ravitz chose -- to help create interesting visual compositions was a first for a Springsteen tour.  “Adding the haze really shows off the Sharpys,” Ravitz reports.

He positioned the fixtures on stage shooting up through plexiglass windows that replace part of the deck and on two  side trusses shooting left and right on the custom-built Tate Towers stage.  The Boss’s shows have typically been designed to be very horizontal to allow for maximum sightlines from every angle.  But for Wrecking Ball Ravitz decided to add some Sharpys to a powerful vertical truss for a “very dynamic look.”

He says, “We’re having a lot of fun with the Sharpys.  Sometimes we use no color, sometimes deep color and sometimes ballyhoo.  We feel we’ve found the right balance.”

The Sharpys are proving to be rugged and reliable on the long tour schedule, Ravitz adds.  “The crews tell me the Sharpys are pretty bulletproof and are working great every day.” 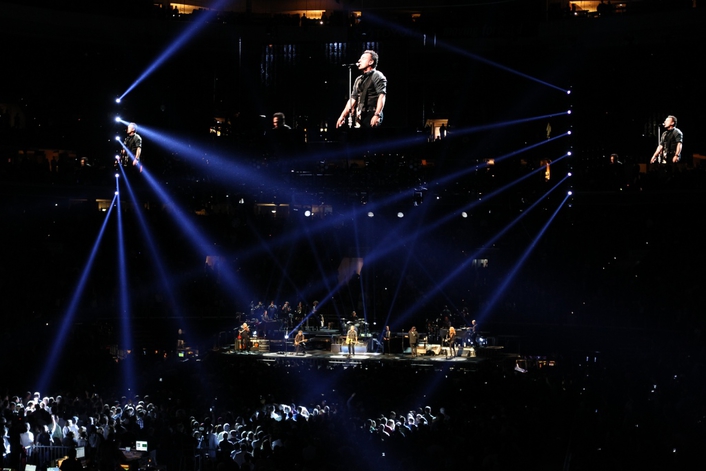 Francesco Romagnoli, Clay Paky Area Manager for North and Latin America, adds, “We’re so pleased to see our Sharpys on this high profile and very popular tour.  Mr. Ravitz is an excellent designer and it shows in the projects he works on.  We’re glad to be able to help with our innovations.”