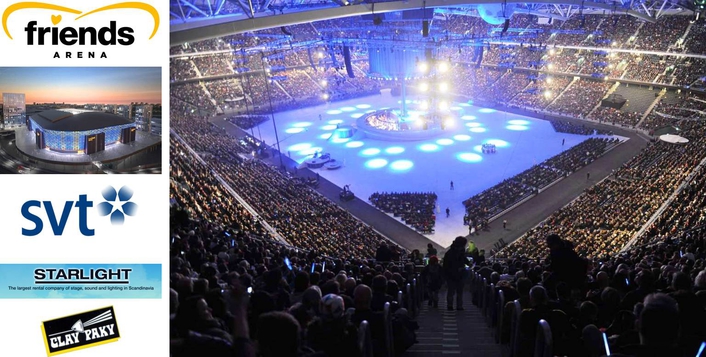 .
Respected lighting designer Per Sundin of Sundin Designers has used 170 Clay Paky Sharpys to light a star-studded, concert that celebrates the launch of the newly built, 67,500-capacity Friends Arena, Stockholm.

Shown live on Swedish TV channel SVT, and on the net via SVT play, experienced lighting designer Sundin knew the show lighting would have to make a dramatic impact both on the live and TV audiences as he explains: “Since the arena is the focus of the celebrations and because the show was performed in the round in the centre of the football pitch I chose to make my rig design as focused and efficient as possible,” explains Sundin.

Using 10 hanging towers, each with four levels of truss pods, plus three truss rings Sundin had limited lighting positions available. The dynamic, 90-minute, music-driven, fast paced event, featured revered Swedish performing artists from rock, pop, musical theatre and classical music, alongside sports figures and dancers. This ensured that the spectators had the opportunity to enjoy a taste of everything they can expect to see and hear at the new arena in years to come.

“I was keen to use a large number of Sharpys because I wanted to deliver a strong, sharp architectural look that would create the ‘live music’ drama for the television pictures. I used the Sharpys to punctuate my design, mixing sharp thin beams of light with bigger fatter ones and using colour and programming to create the mood and atmosphere for each act. The reason I chose Sharpy is because the fixture is a super powerful and feature rich. Basically a brilliant lighting tool at all distances!”

No strangers to TV spectaculars Swedish based Sundin Designers supplies production know-how for television, stages, architectural lighting and productions, and has a celebrated client list that includes the Nobel Prize Foundation, the Cullberg Ballet, and Royal events in Sweden. The company has also been involved in the Eurovision Song Contest six times since 2002.

Featuring a retractable roof, the multi-purpose Friends Arena is now the largest stadium in the Nordic countries and the second largest indoor stadium in Europe. It cost €170 million to complete and opened on October 27, 2012.