Clay Paky Sharpy Rocks the UK from the 2012 Brit Awards 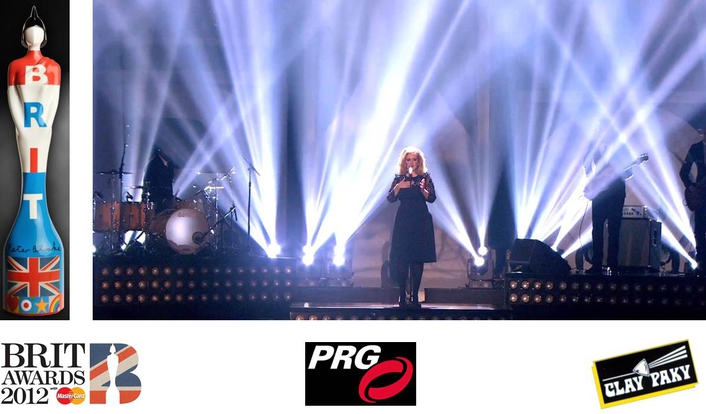 Staged for the second year in succession at London’s vast O2 Arena, the Brit Awards’ audience was entertained by 11 of the highest profile performers on the UK circuit including: Adele, Rihanna, Blur, Coldplay, Bruno Mars, Ed Sheeran, Olly Murs and Florence and the Machine.

Multi award winning Gurdon, keenly recognised worldwide for his TV and event lighting design talent, was challenged with ensuring each act benefitted from its own striking and distinctive ‘on stage’ look. At the same time he had to ensure that the show made as an effective impact on the television audience as it did the live one.

“I’ve been using Sharpys in my designs for around six months now and I’ve been impressed,” says Gurdon. “They’re more flexible than I anticipated. To be able to achieve such extraordinary intensity from such a diminutive fixture is worth a small sacrifice in functionality.”

For the Brit Award Gurdon used the Sharpys in quite specific ways as he explains: “I rigged the Sharpys on pods in tight groups of 12. The pods were primarily deployed above and to the side of the video set. We also rigged them in groups of six on floor Dollys, which we arranged for each artist as required. In addition a number were rigged around the periphery of the central B-stage floor and used as up-lighters for the Florence and the Machine set.

“For the high backlight the tightly rigged pods allowed me the flexibility to use the Sharpys either as individual lights or working together as one multi-beam light or as a single beam ‘super’ light. Because they’re so small I’ve found that by carefully focusing them I can achieve a stadium lighting effect similar to that achieved by the much bigger, more power-hungry super beamlights.”

Gurdon’s multifaceted lighting design - sometimes epic rock and roll and sometimes intimate and theatrical - worked beautifully on a number of levels. Camera close ups and wide angle full stage shots looked excellent, both on TV and live on the huge video screens either side of the vast O2 stage.

Each performer’s set was matchless – Rihanna performed ‘We Found Love’ in a strobing, richly lit, stage wide glass box. Star of the night - the multi award winning Adele - performed ‘Rolling in the Deep’ silhouetted by a dazzling architectural, double banked floor array of sharp white backlight. Florence and the Machine’s ‘No Light No Light’ was appropriately ethereal and intimately theatrical and Noel Gallagher’s video packed, urbanely dynamic performance of ‘AKA . . . What a Life’ really rocked.

For each set Gurdon employed tightly arranged banks of Sharpys, rigged from a plethora of angles and heights to create dramatic, three-dimensional, razor sharp backdrops as he explains: “The Sharpys were particularly good for the Adele set. We silhouetted her quite dramatically with a wall of intense up-light. This read brilliantly both live and on TV, where the Sharpy intensity came into its own.”

For Florence and The Machine Gurdon used banks of Sharpys hung at various heights to create a 1930s, vintage concert hall feel. As Florence Welch strode down the catwalk, from the main stage to the smaller B-Stage, the lighting spectacularly snapped down into a tightly focused cage of uplight, delivered by a tightly aligned square of Sharpys around the edge. 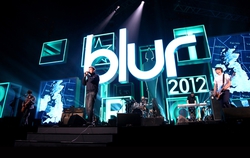 Elsewhere in the rig Gurdon employed a large number of Alpha Beam 300s to tightly light each VIP diner table and integrate the VIP audience into the action of the performances on stage.

Pio Nahum, Chief Commercial Officer for Clay Paky comments: “Al Gurdon’s design for the Brit Awards was fantastic and we are delighted that the Sharpy played such a crucial part in his remarkable design. At just 16 kg, the Sharpy produces a perfectly parallel, ‘laser-like’ beam and features an impressive output of 5,100 footcandles at 65 feet. What makes it fantastic for events like this is that the beam is pristine, razor sharp and free of halo or beam edge discoloration. An Interchangeable colour wheel with 14 fixed colours and an interchangeable gobo wheel with 17 fixed gobos enables users to change the shape of the beam but also create an array of exciting mid-air effects.”

Equipment for the Brits was supplied by PRG, crew chief was Richard Gorrod and lighting programmer was Ross Williams.