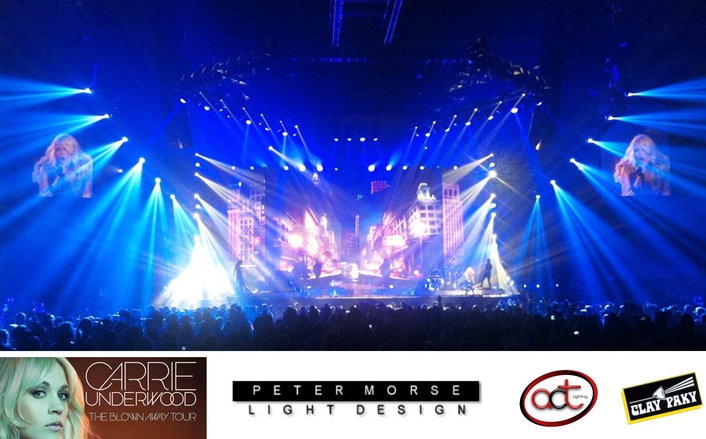 .
Country music superstar Carrie Underwood continues her Blown Away Tour with a large inventory of Clay Paky Sharpy fixtures on hand to accent the video components of the show.  The singer’s first worldwide tour is in support of her fourth album, “Blown Away.”

Lighting designer Peter Morse of Peter Morse Productions in South Lake Tahoe, California based his lighting scheme around three extremely large, trapezoidal-shaped, moving LED panels, which posed dynamic weight, power and sight-line block challenges.  A tilting projection floor added to the task, “necessitating a ‘surgical’ application to lighting design and programming to avoid washing out all the projected images,” Morse reports.  He decided to hang the trussing in a way to complement and amplify the angles created by the trapezoid-shapes moving LED walls. 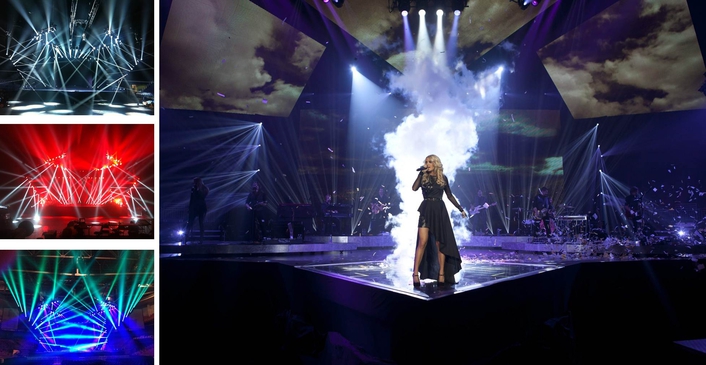 Lighting programmer Brian Jenkins notes that, “we were crunched on programming time for starters and then there were complications with the overall size of the rig when we hit rehearsals.  Thankfully, within a five-day span of programming, we didn’t have to worry about the Sharpy fixtures.  Yoked out, on extreme angles, upside down, right side up – they’re an absolute work horse, the one fixture in the rig we didn’t worry about.  Everyone sees Clay Paky’s engineering and reliability in their products.  It’s about time someone set the bar higher in our industry.”

Morse opted to use the Sharpys for “visual amplification of various musical punctuation in an attempt to draw the eyes of the audience to the artist or other areas of importance” that the extensive LED video imagery may have distracted them from.  “The Sharpy fixtures were positioned to accentuate the angular look of the scenery and LED panels,” he explains.

The Sharpys are performing “flawlessly,” according to Morse, who calls them “fast, bright and amazingly competitive against the otherwise overwhelming output of the LED walls.”

The Blown Away Tour has been “lots of fun,” he says.  “A great artist, great music, fabulous visuals – it’s a large and physically complex show with a look you won’t see anywhere else.” 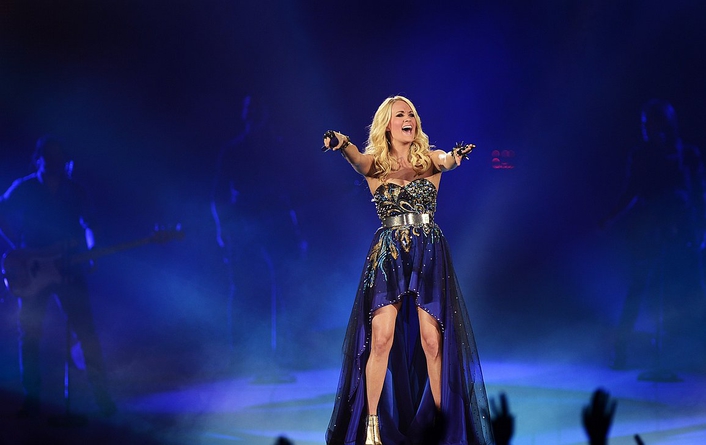 A.C.T Lighting is the North American distributor for Clay Paky.

Francesco Romagnoli, Clay Paky Area Manager for North and Latin America, adds, “I’m proud to see the Sharpys on such a high profile tour and glad that Brian and Peter are getting the most out of them.”