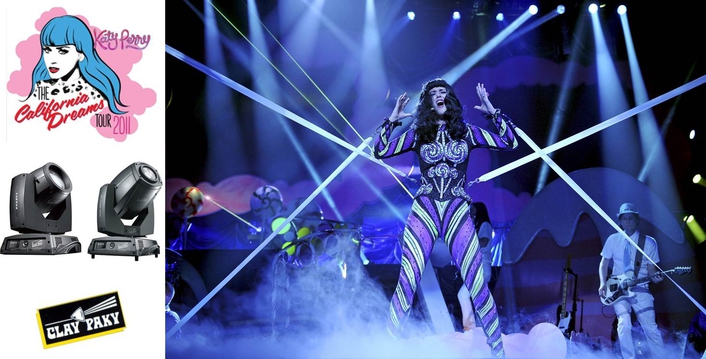 .
It was a dream date for Clay Paky Sharpy fixtures and Alpha Profile 700 automated spotlights when they accompanied American pop star Katy Perry on her California Dreams Tour in support of her new “Teenage Dream” album.

Lighting designer Baz Halpin added 30 Sharpys to US leg of the tour after having used them for Taylor Swift and Lady Antebellum shows.

“Katy’s tour was very theatrical.  It was set in a ‘Candyfornia’ world that was very colorful and thematically-inspired, very much like Katy herself,” he explains.  “The show was divided into five acts with different color schemes for each, ranging from pastel to dark to monochromatic.”

Halpin found that he needed “very small but punchy” fixtures on the floor upstage and along the perimeter of the stage.  “Since we didn’t have rehearsals, I wanted a light I already knew about,” he says.  “With Sharpy, I knew we could match colors with the Alpha spots and also have the benefit of quick, snappy changes of the color wheel.”

He gives kudos to the Sharpys’ ability to “cut through an already visually stimulating show.  We could add to the look without muddling up what had already been programmed.  The Sharpys were a nice exclamation point.”

Halpin utilized 64 Alpha Profile 700s as “multipurpose workhorses” on the tour.  “They have a very strong beam, and I love the style of color.  We could throw a gobo on and use them as Profiles or frost the lights and use them as a wash.  They’re great for theatrical themes as well as very dynamic up-tempo beams.” 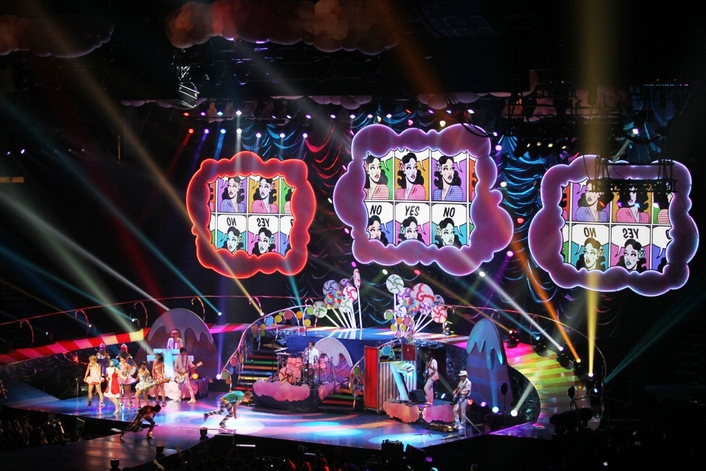 The Alpha Profile 700 is the only 700 watt automated spotlight with framing system available on the market. It offers high luminous efficiency (28,500 lux at 5 m) in a small, quiet package.

Francesco Romagnoli, Clay Paky Area Manager for North and Latin America, adds, “We’re proud that our lights are such an important component of this tour.  Mr. Halpin has been a friend of Clay Paky for a while and it’s rewarding to see him use our fixtures in such interesting ways.”