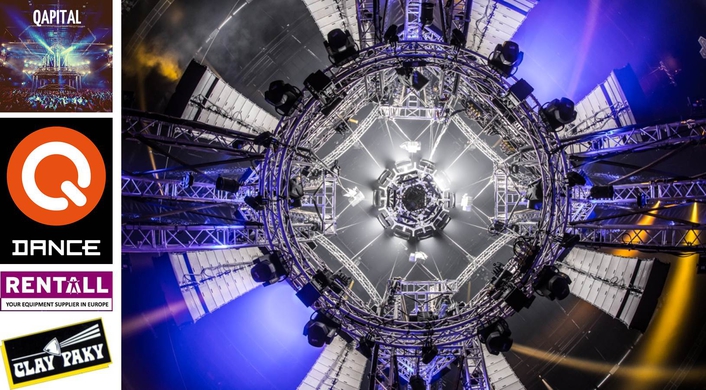 Show designer Mark Rietveld worked with the ‘Q-dance’ creative team to design and build a giant ‘industrial’ DJ set that swept down to encompass the 12,500 strong audience.

“Our in-house stage designer Tamil van Draanen created a centre stage in the Ziggo Dome, inspired by the architecture of Paris’ Eiffel Tower,” explains Rietveld. “It was a creative decision to design a show that did not include the use of video/ LED-walls. In this way we were able to keep the focus on the artists performing at the center of the structure. Challenging, but ultimately better for the overall experience.” 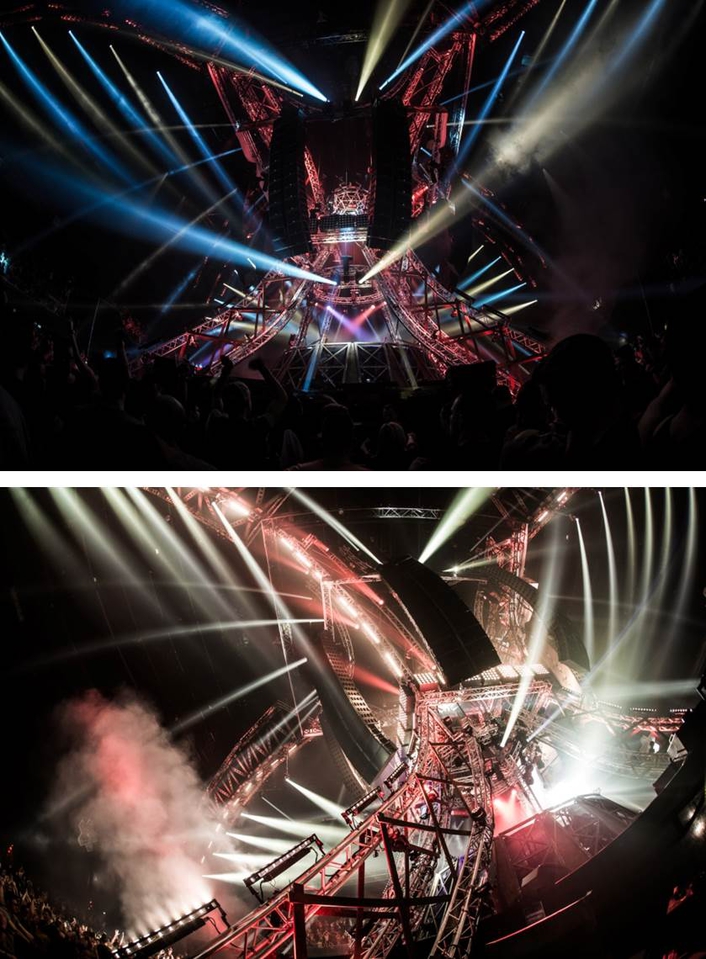 “The brief for the lighting design was to accentuate the structure and give it as many dimensions as possible,” explains Rietveld. “The Sharpys had a specific role in the design, they were there to extend the wings of the stage in the ceiling and to add some punch and power to the center of the set, shooting light down into the crowds.”

The show’s lighting was pre-programmed by Dutch programming experts tenfeet, in their visualization studio, three days before the show opened. On the night Q-dance employed the help of two lighting operators to control the show’s epic lighting package merging the Sharpy’s 189W beam with super-fast laser effects.

“Although there was no video the laser fixtures presented a challenge,” explains Rietveld. “As the output of the Sharpys is really powerful, we had to ensure we kept a balance between lasers and Sharpys. We dealt with this in numerous ways including switching the Sharpys’ colours to darker colours such as congo blue and green; by narrowing the Sharpys’ beams and using the fixtures’ prisma and frost features.”

“The Sharpy shake and the prisma effects are my favorite features,” continues Rietveld. “The shake is an intense effect that fits perfectly into the fast paced, beat-heavy music played at Qapital. The prisma is often used to create a magical look to contrast with other, more intense effects. It is an incredibly powerful fixture.”

Following the remarkable success of the Sharpy, Clay Paky recently released the Super Sharpy, which features a 470W beam, four times brighter than the original Sharpy fixture. With an impressive beam shaping system, diameters can be reduced right down to ‘surgical’ micro beams without compromising on brightness.

“Although we love the Sharpy, we cannot wait to work with the new Super Sharpy,” says Rietveld. “To have something that powerful on one of our shows would be brilliant.”