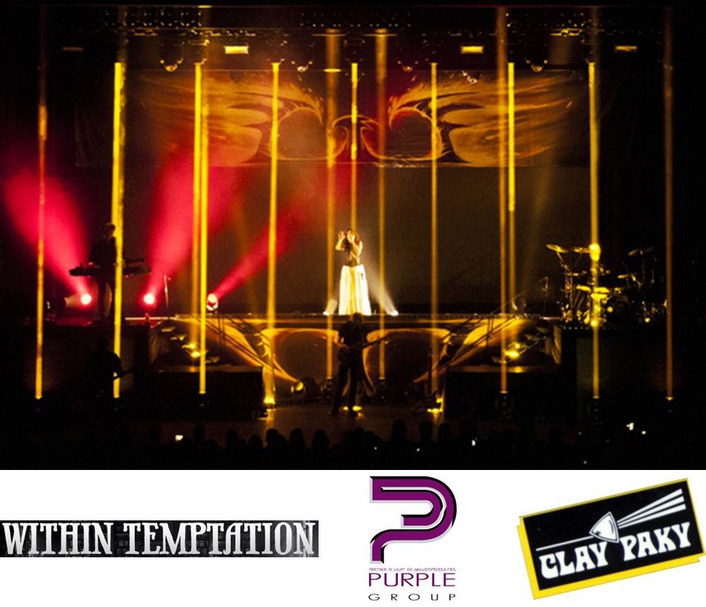 .
Dutch super group Within Temptation and it’s lighting designer Pim Elberse are currently proving that Clay Paky Sharpys are de-rigueur when it comes to lighting some of the world’s biggest rock bands.

Following it’s hugely successful Dutch theatre tour, Within Temptation - dubbed ‘a symphonic/gothic metal band’ and founded in 1996 – is setting off on a mammoth festival tour that will take in 35 music festivals across Spain, Sweden, Italy, Belgium, Romania, Bulgaria, France and many others.

Rotterdam-based Elberse, discusses: “The show is divided in two sets: An acoustic and an electric set. We wanted to create a design fitting for both moods, and because we are touring we needed fixtures that could handle both.”

Comprising a riser-setup and led-walls, with additional decorative banners and backdrops, Elberse wanted the main stage to be clean, which meant using only small fixtures on and in front of the risers.

Pim says he chose to use Sharpys, which were supplied for the tour by Dutch rental company Purple Group, because: “We use a big LED-wall at the back of the stage. I needed something really punchy to penetrate the LED. I also wanted a fixture that could create calm looks for the acoustic set but could be very fast and dynamic for the electric one. I’d used Sharpys before on the festival and club-tour in 2011 so I knew it was the right fixture for the tour. It’s light, fast, extremely dynamic, and very bright. I never had the feeling I was missing CMY colour mixing - all the colours are punchy and the wheel is really fast. Gobo’s are great, as is the rotating eight-facet prism. When combined with the fast pan and tilt these features facilitate an endless variety of looks from slow rotating and darkly atmospheric to bright strobing sweeps.”

This year Within Temptation’s record sales have gone stratospheric, totaling more than 3 million CD and DVD sales across 48 countries worldwide. The band has already played to more than 500,000 fans. Founding member Sharon Janny den Adel describes the band’s live work as ‘epic and cinematic’, and this year’s Sanctuary tour promises to be a visual feast that highlights song storylines from the band’s most recent album, The Unforgiving.

“We talk a lot about the show, the vibe, the atmosphere and the integration of video,” explains Elberse. “We try to avoid it becoming a ´video-show´, it has to be fully rounded and lights are an important part of that, although they also have to be discrete. The fact that the Sharpys weigh in at just 16kg and are extremely robust makes them an ideal fixture for my purposes.”

In addition Sharpys are lightweight, have a small footprint and can achieve an unprecedented brightness, usually only achievable with far greater wattages than their 189W rating. As the 2010 Jury for the industry respected PLASA Awards said: “We never thought we'd see a 190W light that we could use in Wembley Arena!”

Pio Nahum, chief commercial officer for Clay Paky says: “Clay Paky fixtures are increasingly being used to deliver both the backbone and special effects of many a dramatic lighting design, not only in rock and roll but in theatre, TV and events. Their reliability and robust nature make them equally ideal for touring, one-night events and long running shows. The range of effects and the exciting palette of colour and shape make the Sharpy an obvious tool in the LDs design palette. In particular it’s recognised for the purity of its beam. Sharpy offers 14 different colours and 17 gobos, enabling lighting designers to change the shape of the beam and to create an array of spectacular mid-air effects, which LD Pim Elberse is clearly making excellent use of on the Within Temptation tour.” 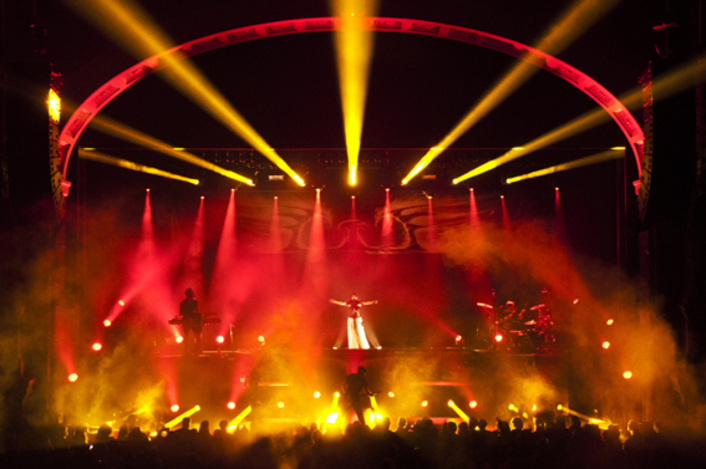 Within Temptation’s summer 2012 tour continues until the autumn