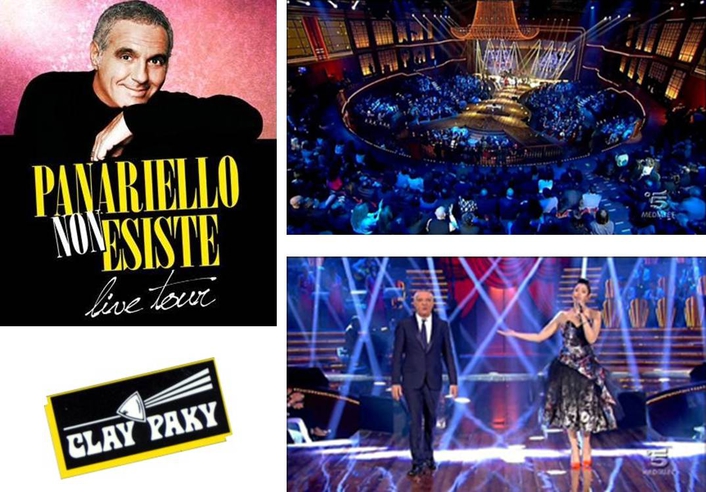 “Panariello non esiste” (Panariello does not exist) is a typical modern TV programme that freely mixes different genres and forges them into a show which is enthralling for both the guests in the studio and the viewers at home.

The director of photography Massimo Pascucci explains that “the concept of the lighting design stems from the need to strike a fair balance between the purely theatrical setting of the sets designed by Gaetano Castelli and the need to transform them into a sort of concert stage, in order to achieve spectacular effects during dances, acrobatic exhibitions and conjuring tricks.”

The lighting consists almost entirely of Clay Paky units. In detail, 70 Alpha Profile 1500s are used for the orchestra, backstage and audience backlighting. Fifty Sharpys have been positioned vertically in mid air on eight tubular structures behind the orchestra, with others parallel to the proscenium of the theatre and on the ground behind the entrance door. Thirty-six Alpha Beam 700s have been arranged around the outer edge of the theatre for the sidelighting during the dances and when special effects are required.

Pascucci says: “I knew the Alpha Profile 1500s well. I chose them for the high power output they are capable of: I have seen them working at a height of over 12 metres inside Cinecitta Studio 5, one of the largest theatres in Europe.”

With regard to the Sharpys, “I needed an unobtrusive lightweight spotlight I could put in full view behind the orchestra at a height of 5 - 6 m without disturbing the elegance of the setting. Sharpys are able - with their awesome power - to be highly effective on stage. They are almost able to make the show on their own!”

The most astounding thing about Panariello's show is the imaginative use of the Sharpys during the musical performances and various interludes. The effect on stage was that of a true live show, with dozens of “solid pipes” that cut through the air until they reached the stage creating a beautiful weave of lights in which the performances took place, including those of the versatile Nina Zilli and the numerous international guests that took turns to appear during the transmission.

Massimo Pascucci tells us that he had about a month to implement a highly complex set and lighting design “since we are in a huge space of some 3000 sq.m with a revolving stage consisting of two semicircles with two different sets: the orchestra is on one side and a sort of theatre backstage on the other. Implementing the project involved tremendous effort and commitment with hundreds of people at work during the construction stage, but once the job was completed all the fatigue faded away when we saw what we had achieved.”