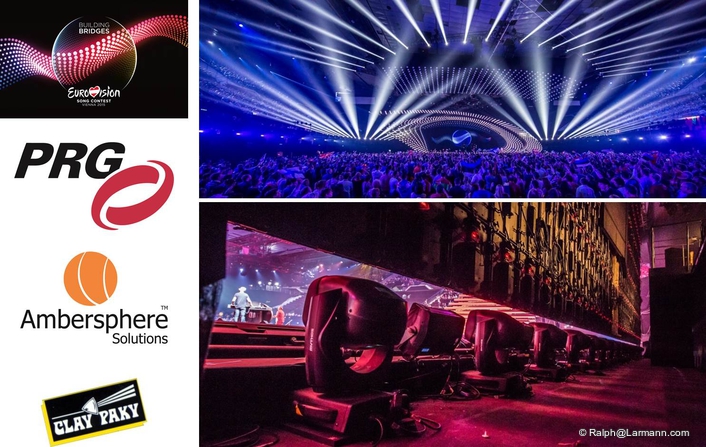 .
Award-winning lighting designer Al Gurdon made spectacular use of a predominantly Clay Paky rig for one of the world’s largest TV entertainment events, The Eurovision Song Contest 201.

Celebrating its 60th anniversary with the theme, ‘Building Bridges, Eurovision was sponsored by OSRAM and hosted at the Wiener Stadthalle in Vienna.

UK based Gurdon, whose previous lighting triumphs include the opening and closing ceremonies of the Sochi Olympic Games and the American Super Bowl, has now lit Eurovision three times. This time he chose 172 of the new Clay Paky Mythos, 48 X Sharpy Wash 330, 83 X A.leda B-EYE K20 and 74 Stormy fixtures to deliver a dazzling, party atmosphere bursting with vibrant colour, varying shape and dimension. 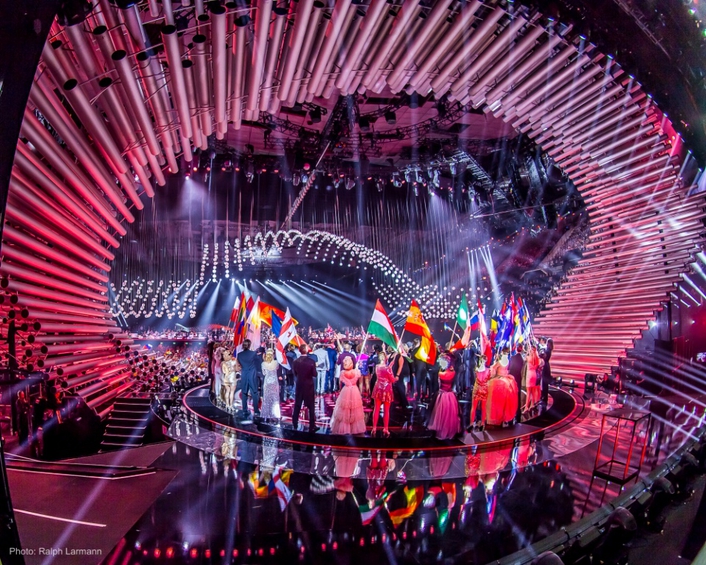 Working alongside Eurovision’s creative director, Kurt Pongratz, Gurdon and his programmer Mike Owen delivered a sharp, beat perfect lighting design that complemented each act’s stunning video content, which was conveyed via the floor, the backdrop screen of the stage and across the end lit array of aluminium pipes, which made up the eye shaped set. 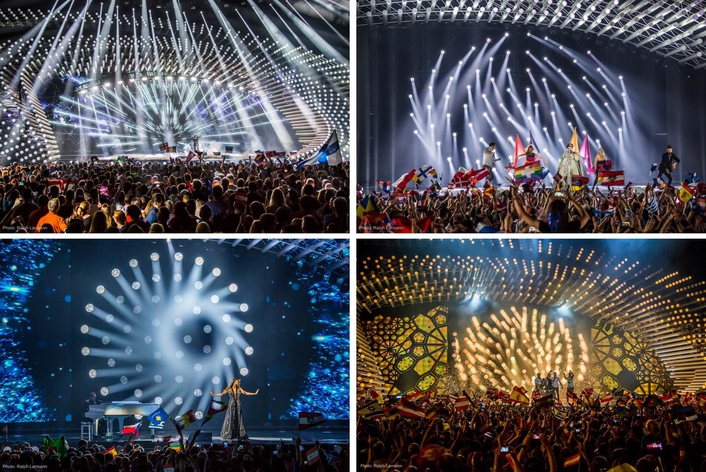 With almost 40 different nations taking part, each demanding its own defining look, Gurdon had his work cut out: “The challenge for us was to guarantee each nation’s song felt unique,” explains Gurdon. “At the same time we had to deliver a cohesive feel to the overall look of the broadcast. Because of this I wanted to ensure the backbone of my lighting rig was consistent.”

Gurdon needed a fixture that was bright, punchy and versatile: “Ultimately I chose the Mythos because it offered everything I was looking for. It performs just as well as a beam light as it does as a spotlight. The color mixing facility was also a crucial decider because it allows me to fine tune and color match to all the other mediums being used on stage.” 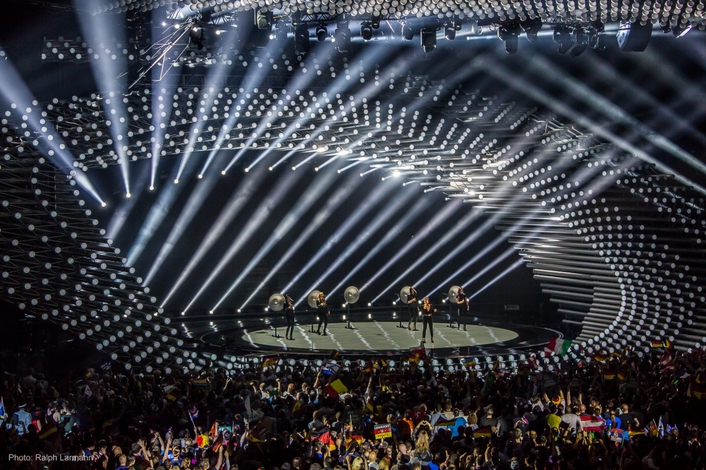 Designed specifically for television, Eurovision presents a number of its own unique challenges. Pulling performers out from a video heavy backdrop, conveyed on a 2D medium, while keeping color and intensity balanced across all the output mediums can be testing.

Bringing additional visual depth to the lively stage and some stunning beam effects, Gurdon designed a matrix of Clay Paky A.leda B-EYE K20s. These were rigged in such a way as to evoke one giant B-EYE and the whole matrix could migrate from behind the main video backdrop to above the screen, offering a number of different effects and looks. 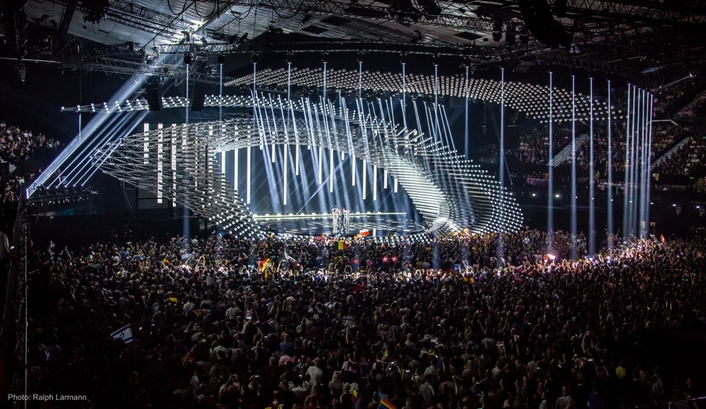 “For some of the performances we would remove the rear video screen and use the B-EYE matrix as a dynamic, high impact backdrop or beam effect generator. We could also move it overhead to shine down and twinkle through the array of end lit pipes that framed the stage,” explains Gurdon. “This was extremely effective, especially for Ireland’s forest scene. The fixtures allowed us to generate a look that felt organic from something very high-tech. They also brought a great dynamic into the room and could be used to extend the height of the set, such as during Italy’s big operatic number.”

Further supporting the Mythos, Gurdon rigged numerous Sharpy Wash 330s towards the back of the set. PRG Lighting Crew Chief Richard Gorrod explains: “The power of Sharpy Wash 330 fixtures complemented the Mythos and at the same time, their compact size proved ideal for the venue, as it has quite a low roof.” 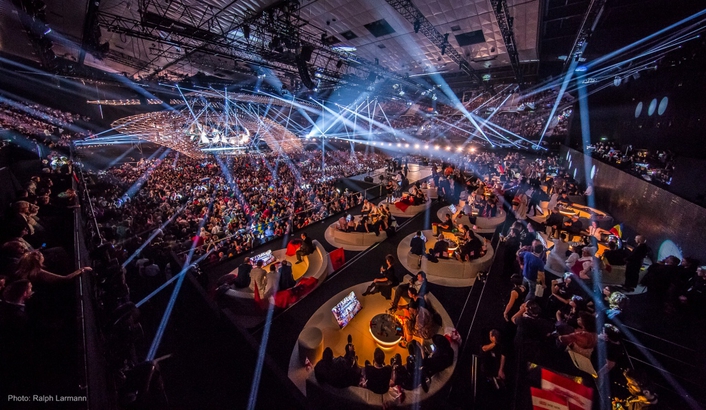 Adding further dimension and for those moments requiring additional ooomph Gurdon peppered his rig with a number of Clay Paky Stormy CCs, which delivered intense strobing and super bright swathes of colour across the back of the stage. “Clay Paky fixtures have definitely become the standard in stage and TV lighting,” says Gorrod. “The looks they can achieve and the fact that they are robust and reliable make them a great rental investment – you hang them up and they work. Plus, they’re relatively lightweight and use remarkably little power for their resulting output. The Mythos is just 470W. This means that, compared to prior Eurovision events, the power consumption on this year’s contest has been significantly reduced.” 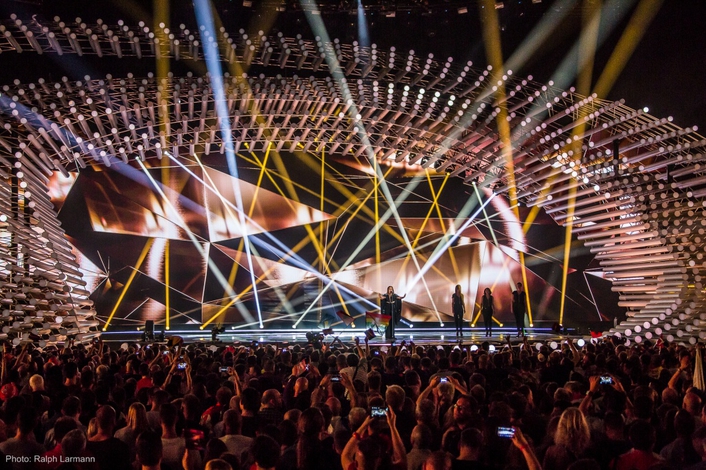 Every year some 180 million viewers watch the Eurovision Song Contest. This year Sweden was victorious, with its entry ‘Heroes’ by Måns Zelmerlöw.