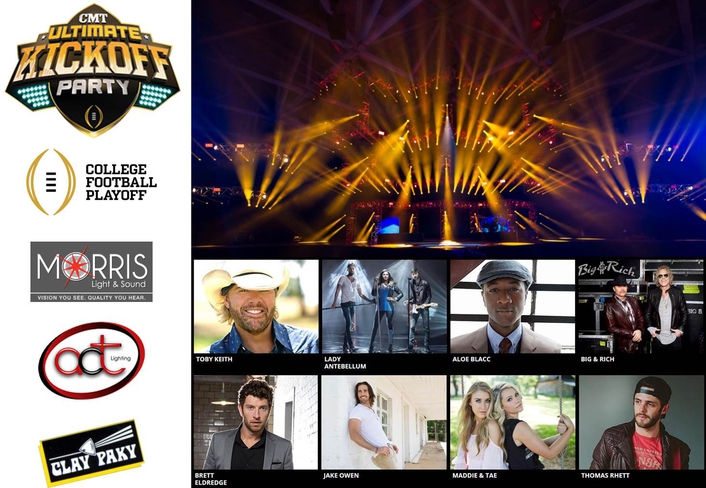 Production designer/lighting designer Mike Swinford obtained 146 Mythos fixtures from Nashville-based Morris Light & Sound, which offers a large inventory of the new lights.  As a spot, Mythos has an outstanding large beam and zoom optimized for focusing; as a beam light it remains parallel for its entire length even at great distances.  Mythos is smooth, fast and very quiet with a completely redesigned indexed visual effects disc.

Swinford and Morris Light & Sound president and CEO David Haskell were introduced to Mythos when A.C.T Lighting Vice President of Sales and Marketing Brian Dowd invited them to Clay Paky’s factory in Italy.  Dowd orchestrated the visit, accompanied them on the trip and arranged demos of the new fixture.  They were among the first people to ever see the fixture and immediately thought it was amazing.  Haskell ordered 240 Mythos lights, and Swinford was first in line to use them.

“I was shopping for something new and great for the upcoming Kenny Chesney tour,” Swinford recalls.  “Then this job for CMT came up, and I asked David if we could use the Mythos for the ‘Ultimate Kickoff Party’ first.  He said sure, but the lights were so new they didn’t have cases yet!”

Haskell notes that Morris Light & Sound “does a lot of work with CMT, so we were happy to be able to offer Mythos on short order.  I always hesitate to use a brand new fixture on live TV, especially so many of them.  But my confidence level was high enough that Mike decided to give Mythos a go.”

“The show was primarily lighting-driven,” Swinford says, “although we had some low-resolution screens in the truss structure to display graphics.  Mythos dominated the rig and was supported by some LED Flares.  With Mythos I was able to get everything I wanted from a single fixture: huge graphic looks – like Sharpy on steroids – the ability to zoom out for nice texture with gobos and the ability to soften the edges for a pseudo wash-type look.  I was confident that Mythos could be the one light that does it all.” 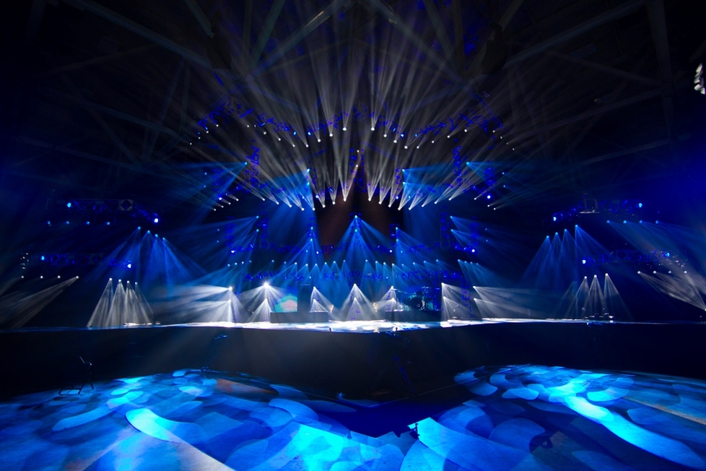 With this configuration, “we could do one thing, like zoom, with the horizontal Mythos, then add sharp parallel beams from the vertical Mythos,” Swinford explains.  “Mythos allowed me to create distinctive looks for each artist by changing up color palettes and using their great gobos.”

Lighting director and programmer Mike Appel was also dazzled by the lights.  “Mythos is so small, so bright and so versatile,” he says.  “We could go from super Sharpy-type beam mode to a really wide zoom.  The patterns, aerials and color mix were really great.  It can do everything: strobing, flashing, color changes.  We could pop from beam to zoom mode really quickly, and the lights held up well.”

Swinford says, “For Lady Antebellum the Mythos were pointed straight at the camera with a gobo look that was fantastic – very crisp and hard edged.  The optics on the lamps are outstanding.”

“We put a star field pattern in the fixture and spun it fast so we got an unbelievably strong look,” adds Appel.  “It was a look we couldn’t have gotten before with a smaller head.”

And on the finale with Big & Rich covering “Save a Horse, Ride a Cowboy,” Swinford and Appel “went all out,” says Appel.  “We were in full-on party mode and structured the beams to cut through everything.  With all the chasing we were still able to create a structural look with the beams cutting through.  They looked just great!” 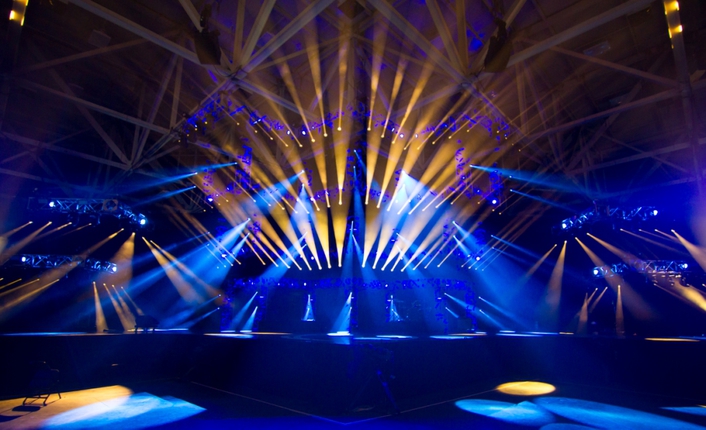 Swinford says the Mythos fixtures generated lots of buzz backstage.  “Nobody had ever seen this look before, and the artists could see and feel the power of it.  They all made comments: ‘What is this? We’ve never seen anything like it!’  They were very impressed with the new look of Mythos.”

Swinford reports the fixtures “came off great” on their TV debut.  “We ran them about five days and they performed amazingly.  When I turned on the rig for the first time it was really exciting.  I haven’t felt this strongly about a light for a long time.  It’s nice to be the first kid on the block with a new toy!”

“I think Mythos is going to be very popular,” Swinford concludes.  “Clay Paky will probably have to run double shifts to keep up with the demand!”

Francesco Romagnoli, Clay Paky Area Manager for North and Latin America, added, “This is a great project for one of our first Mythos applications.  Mr. Swinford, Mr. Haskell and Mr. Appel are all great artists and collaborators and we’re thrilled with the result they got from our new fixture. We also thank A.C.T Lighting for their valuable work and commitment to making this happen.”