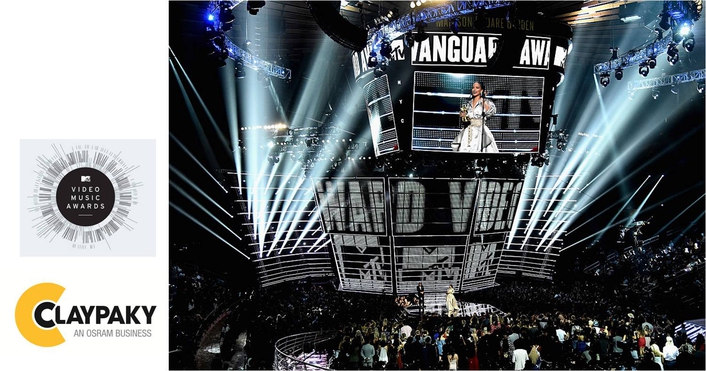 Barnhart, with LA-based 22 Degrees, marked his second anniversary with the VMAs.  “The biggest challenge is coming up with a light plot for a show that continues to evolve right up to the last minute,” he explains.  “You need a rig with enough versatility for the main stage and all the acts, which have not been worked out yet.  Madison Square Garden has an additional challenge too -- there are not a lot of scenic elements to embrace the audience on cross-camera shots.  So that’s where lighting plays a part.”

Barnhart chose 178 Clay Paky Mythos for the VMAs.  “The fixtures have found their way into my rigs since I used them at the Super Bowl XLIX Half-time Show, before they were introduced to the market,” he says.  “For the VMAs Mythos gave me good dynamic beams and acted as versatile utility fixtures.  Their hot beams helped to hyper-focus and draw attention to certain areas, but they also flooded out enough to serve as another kind of tool.  It’s a great light.”

The lighting designer hung Mythos throughout the Garden in an array of truss octagons that mimicked the shape of the set.  Mythos also filled alternate rows in the two scenic wing walls flanking the main LED screen behind the stage.
Barnhart dedicated 36 Sharpys to the rear of the Garden to act as background for the VIP seating and to give depth and shape to the arena itself.  “The Sharpys are good when you need to break up dark areas, areas that lack information for the cameras,” he points out.  “They’re an amazing tool.”

The Garden’s own array of Mythos and Sharpys, permanently mounted over the outer ring of the ceiling, delivered extra punch as needed.
PRG supplied Barnhart’s Clay Paky fixtures for the awards ceremony.
A.C.T Lighting is the exclusive North American distributor for Clay Paky.
Francesco Romagnoli, Clay Paky Area Manager for North and Latin America, added, “Its great to be part of one of the biggest visual events on television and it’s always a pleasure to collaborate with Mr. Barnhart.”