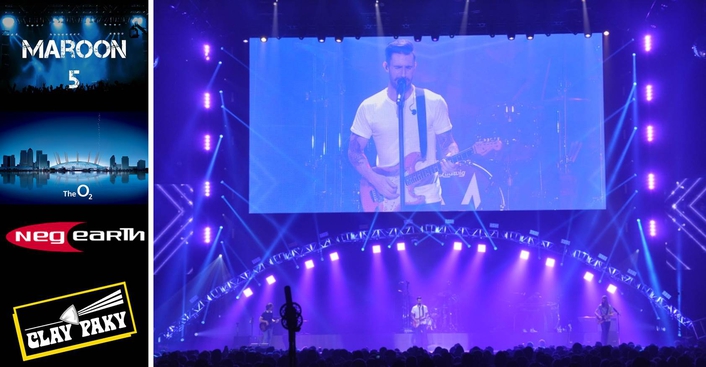 .
There’s little doubt that Maroon 5 are riding high at the moment.  This is a band who radiate confidence and self-assured accomplishment in their live performances.  Here in the UK and Europe in January to complete a date sheet interrupted by front man Adam Levine’s TV commitments to the US version of The Voice, another outfit might have opted for a pared down version of their stage production for just a few shows.  Not so for Maroon 5.  With a stage set, laser show, video and lighting design by Eric Wade, a veteran of the likes of Usher, Mariah Carey and Eric Clapton, this was a show to blow away all of those January blues.

Described by the London Evening Standard as “A lightshow which could have illuminated the dark side of the moon,” Wade’s design was lacking only in compromise.   To compete successfully with the video content, the lighting rig needed to be able to hold its own with three of the ‘most high-definition screens this reporter has seen at the O2’.

“I am using a ton of Clay Paky fixtures on this show,” says Wade, “probably the most ever.  There are Sharpies, Alpha Profile 1500s, Alpha Wash 1500s and Sharpy Washes. I really, really like the Alpha Wash which I specified when I originally re-hung the rig – it does the job better than anything else on the market.  As for the Sharpy Wash, it is simply an incredible fixture; I’ve been able to swap out a good many lights and replaced them with fewer of the Washes.”

“With such an intense light level on stage and with live footage being integral to the show, I needed a keylight that could really holds its own.  The Alpha Profiles have proved to be just that and more.  If a rental company didn’t have them in their warehouse, I would insist on a sub-hire or a purchase as a substitution would simply not be acceptable.”  Wade is almost surprised by his Clay Paky epiphany: “I admit to not being a veteran Clay Paky user,” he says. “My background is with another manufacturer but I confess to being totally converted.”

“The combination of high quality lighting fixtures and a great crew from Neg Earth has made this tour something of a joy,” Wade continues. “I had very limited time to design the show though I did a good deal of programming in my basement in New Jersey.  My console of choice is a grandMA2 – in fact it is the only desk I would ever use.  I have one of my own at home; probably one of the first sold in the States which shows how confident I am that it is a board that will remain the standard everyone else will have to beat for many a year.  I guess it is the combination of simplicity and the power to accomplish whatever you want that does it for me.  No other board comes close.” 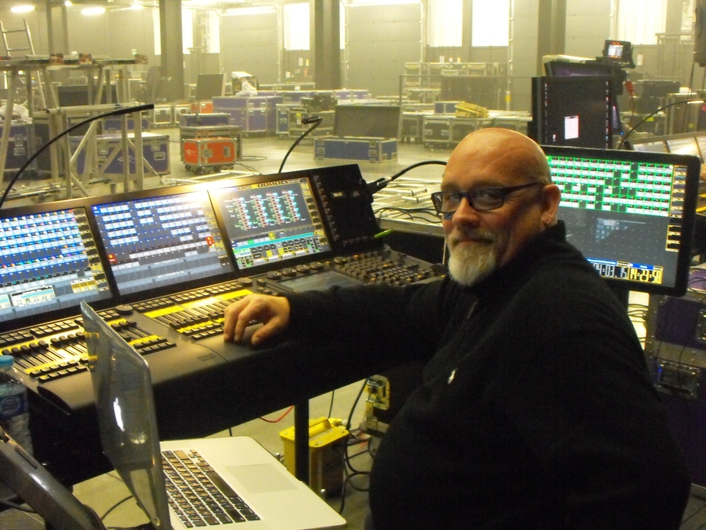 “I arrived in London to winter storms and lost luggage.  Things were not looking bright but as soon as we got into rehearsals I knew I could relax.  The Neg Earth guys were superb – nothing was too much trouble - and then I discovered that Ambersphere Solutions who provide support for both Clay Paky and MA were just around the corner so I asked if they would let me have a look at the new B-EYE fixture.  They very kindly came over to rehearsals and set up a demo for me.  The light was just as amazing as all the press has said. I can't wait to get it in my rig!”