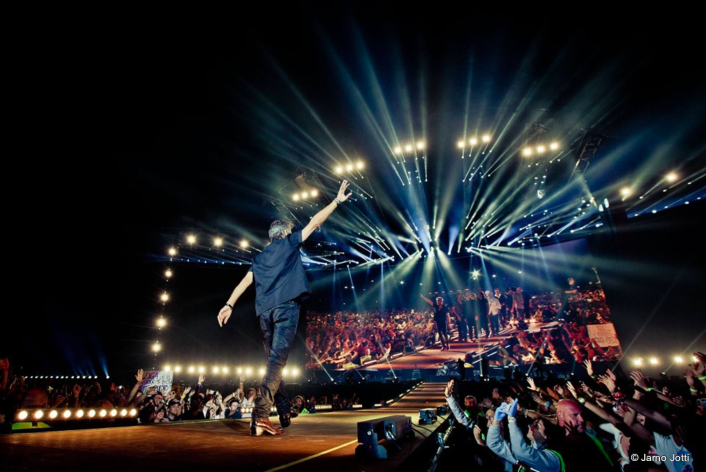 Clay Paky was a main attraction at Campovolo 2015 thanks to Lighting Designer Jo Campana. Campovolo was a three-and-a-half hour music festival organized to celebrate Ligabue's twenty-five year career. The 150,000 tickets sold for over seven million euros makes it an all time record for Italy.

This year, the production team concentrated on two priorities: making sure the entire audience, including those furthest from the stage, had a high level of concert visibility and outstanding sound quality. To meet these requirements, an imposing sound system was installed and an impressively big curvilinear stage architecture was built, featuring a magnificent LED wall (960 square yards, 0.6" pitch).

Since, as Jo Campana said, "we wanted everyone there to be able to see the event as if they were in the front row," as well as enjoy the music, "a lot of airtime was devoted to live images on the huge LED wall, often with a single signal to the full screen."

The lighting rig was conceived, developed and built on the basis of the overall coordinated design and creative concept, which combined the lighting and video required for the three different musical sets planned for the concert. Owing to the presence of the LED wall, this interdependence placed constraints on the positioning of the lights and also led to having to use special technical solutions, such as variable-speed motors to move the trusses placed under the stage roofing.

Jo Campana hung 100 Sharpys on these trusses: "I opted for Clay Paky lights to ensure rapid operation and make the entire set as dynamic as possible since they are extremely lightweight and their movements are fast.”

Another conspicuous battery of 120 Sharpys was placed externally along with 60 Alpha Beam 1500s to support the off-stage lights devoted exclusively to creating the look and illuminating the audience.

“I usually only ask for a few kinds of lights, but all with strong tracing features and a punchy effect.”

There is never very much time to program the lighting and you need to equip yourself with tools and lights that always ensure utmost reliability.
The pre-production time devoted to creating, rendering and exporting the video content was decidedly different (this task was done by Luciano himself together with Claudio Maioli).

Several companies were involved in producing the event: RCF for the sound system, STS Communication for the video, CME provided electric generators for the whole area, La Diligenza was the staging company and Electra Service dealt with moving the trusses.
The rental company Agorà Service provided the lighting equipment, and - again on this occasion - ensured their usual technical efficiency and their highly professional crew.

Jo Campana was born in Brescia in 1963. He approached the world of live entertainment in the mid-1980s, heavily influenced by his passion for music. After a valuable apprenticeship in a Milan service firm as a lighting technician, he took on his first job as a lighting designer in 1999 and has since pursued his inclination for lighting in the world of music and beyond with undiminished enthusiasm.
He boasts a wide range of experiences and different kinds of concerts in Italy and abroad spanning from clubs and stadiums to theatres and event concerts. Among the most famous musicians and events whose lighting he has taken care of are: Ligabue's tours (including the legendary Campovolo concerts, the Verona Arena concerts and the performances at the Royal Albert Hall in London), Sting, the Italy Loves Emilia event, the Ultimate World Guitar Exhibition, Litfiba, Ivano Fossati, Mario Biondi, Negrita and Francesco Renga.  After almost thirty years of distinguished career, Jo Campana says he considers himself privileged since his profession satisfies him and he loves doing it as much today as he did when he began.