Coppini had fun with the diagonals. The tracers reached the stalls with long beams, thus creating more dynamic perspectives for the audience.

Bergamo's Creberg theatre sold out. The show was full of genuine musical masterpieces: the first half promoted the singer's new album with songs crammed with Dylan's metaphors and rhetorical figures, fully translated into Italian, and the second half was devoted to his own verses, from "Rimmel" (Mascara) right up to the naive immortal flight of "Donna Cannone" (the Lady Cannonball).

Francesco De Gregori, also known as Il Principe (the prince), immersed himself in the audience's applause in the middle of the stage, lit by two beam shapers on the first batten, while a set of Clay Paky Alpha Beam 700s was used as backlighting to pay the audience back by illuminating them with slow moving criss-crossing beams of soft light. 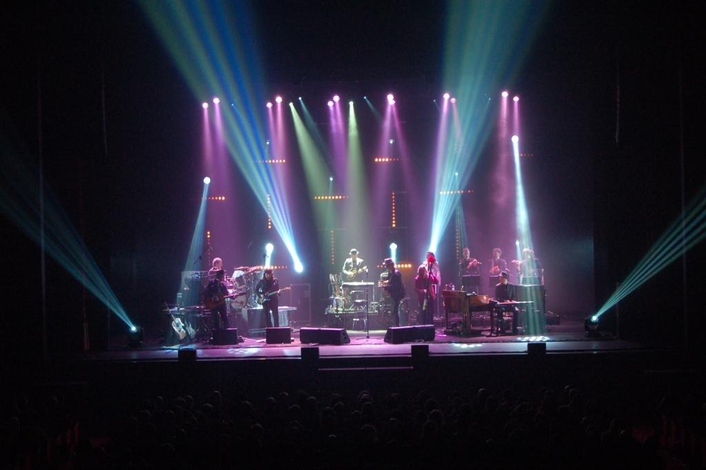 For the "Amore e Furto" (love and larceny) Tour 2016, De Gregori decided he wanted a show with scenery created by light alone, with no physical elements.
The lighting designer Andrea Coppini chose to standardize the lighting rig by exclusively using the Clay Paky Alpha 700 family of lights: the Wash, Spot HPE and Beam.

“Through this choice, I had consistent colours and the same kind of lamp, which made the overall effect more uniform, not to mention the benefits of working with Clay Paky quality products. The Alpha 700 line of lights, which I have already used, are lightweight, compact and easy to rig."

The lighting design consisted of three straight battens, fitted with twelve Alpha wash 700s and fifteen Alpha spot HPE 700s, plus eight Par LEDs and six blinders. These provided the backbone of the design.
There were six ladders hanging below the last batten, on which nine Alpha Beam 700s were hung, interspersed with 18 Sunstrips.
Ten Par LEDs completed the design, fitted as side lights about three metres (three yards) from the ground (five on the right and five on the left), along with four other Beam 700s placed on the ground on the stage. “Sidelighting is never missing in my lighting designs for the theatre.”

“The ladders are designed as a dynamic, animated backdrop, which changes shape and appearance for each piece. It is the part of the design that most characterizes the show.”
In some cases, the ladder structure was lit from the side and could be seen behind the musicians, as something that actively took part in the scenery, a backdrop in a way. Sometimes, instead, it was beams that filled the stage, and other times it was the dynamic effects of the Sunstrips, which were used as an array of warm lights.

Andrea explained a particular peculiarity: “The Alpha Beams placed on the ladders are arranged asymmetrically to the stage, so that the lighting design is rational.  This choice however led to some extra programming difficulties: it is harder to find the points where beams cross when the lights are mounted asymmetrically to each other.”

Moreover very often the stage was plunged into darkness and speckled with flashes of gold, amber and shades of blue that let the audience just catch a glimpse of the band, led by Guido Guglielminetti.

The show gradually built up to an exciting finale in which the audience was wrapped in light and literally exploded calling De Gregori back onto the stage, where - as a complete surprise - Fausto Leali's voice suddenly rose up singing a timeless piece of Italian music.

Andrea Coppini
Andrea Coppini began working professionally in the show lighting field in September 2001 when he decided to turn his passion for lighting into a new profession after ten years of working in the industrial automation sector.
He started working with Agora in 2004 as a lighting desk manger and assistant. During his time there, he supported several of the most important Italian lighting designers on tours.
He began working as Francesco De Gregori's lighting designer in 2008, and still works with him today.
During 2016, he will design the lighting for Annalisa's "Se Avessi un Cuore" (if I had a heart) tour and Fabri Fibra's “Io Odio Fabri Fibra” (I hate Fabri Fibra) tour.