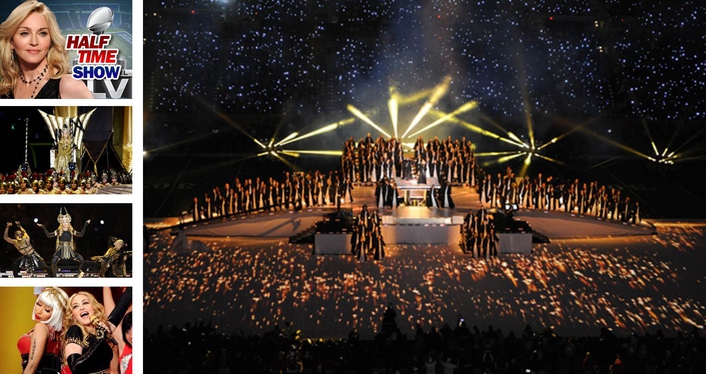 The shape of the Halftime Show is always determined by the artist
Madonna may have headlined Super Bowl XLVI’s Halftime Show, but Clay Paky Sharpy fixtures made a name for themselves too, helping to light up the stage for the Material Girl at Lucas Oil Stadium in Indianapolis.  Lighting designer Al Gurdon, of UK-based Incandescent Design, utilized 204 Sharpys supplied by PRG after being impressed with their performance on FOX’s “X Factor.”

Gurdon has been recognized internationally for his TV and event lighting design.  He holds the Lighting Designer of the Year title from the TPI Awards and has netted Lighting Design Awards, Royal Television Society Awards, and Australia’s Helpmann Award and Knight of Illumination Award.  He has served as lighting designer for the famed Eurovision Song Contest.

For the Super Bowl Halftime Show, Bruce Rodgers of Tribe Inc. was once again the production designer, All Access Staging built the set and PRG and Full Flood provided the lighting services.

“The shape of the Halftime Show is always determined by the artist,” says Gurdon who has been lighting designer for two previous shows featuring The Black Eyed Peas and The Who.  “Madonna is an entertainer, and there were many elements to the show, including a lot of dancing.  Much of the spectacle was built on the stage so there was less of a requirement for us.”  In fact, this year’s Halftime Show was one of the largest and most technically challenging ever with the largest cast, most lift effects and biggest projection and lighting rig.

Gurdon notes that since “Madonna is also very glamorous it was important to me to light her as well as I could and always present her and the other performers in a good light that allowed the audience to see the show.”

As a result he created “a cleaner look this year” that was careful to preserve all the video projection mapping taking place on stage where Madonna was joined by M.I.A., Nicki Minaj, LMFAO, Cee Lo Green, Jamie King, Cirque du Soleil and Moment Factory.

“The Sharpys seem to be ideally suited to projects where power, brightness and optical efficiency is required,” says Gurdon.  “I put them in rectangular pods of 20 or 16, packed very tightly together.  When used in a cluster as one big moving light they appeared to be a solid beam that could really rival the big outdoor spots.  Yet we could suddenly split them into 24 beams, too.  And we had some on the floor.”

Sharpy is a 189W moving head with a brightness usually achievable with far greater wattages, producing a parallel, laser-like beam with an output of 5,100 footcandles at 65 feet.  It features 14 colors and 17 gobos, allowing users to change the shape of the beam and create an array of mid-air effects.

Gurdon reports that the Sharpys “performed very well.  They are pretty awesome for their size: extremely compact but incredibly powerful.  You really get an intense effect out of them.  I was very pleased.”

Mike Oz Owen was the Varilite board operator for the Halftime Show.  A.C.T Lighting is the North American distributor for Clay Paky.

Francesco Romagnoli, Clay Paky Area Manager for North and Latin America, adds, “We’re proud that our Sharpys are once again the feature light in such a high profile event.  Mr. Gurdon is a great friend of Clay Paky and an excellent designer and we believe the SuperBowl marks another important step in the acceptance of our products and our brand recognition in the US.”