.
After taking a year off from the road to concentrate on recording, Kenny Chesney has launched “The Big Revival Tour” across North America in support of his album released last year.  A large complement of Clay Paky Mythos, Sharpy Washes and Stormy Strobes help Chesney amp up the excitement at his arena and stadium dates.

Chesney kicked off “The Big Revival Tour” at Nashville’s Bridgestone Arena with guests Grace Potter, Taylor Swift, Uncle Kracker, Dave Lee Murphy and Joe Walsh.  A four-time Country Music Association and four consecutive Academy of Country Music Entertainer of the Year, Chesney has always worked to make sure his production is as cutting edge as possible.

To help achieve that feel, Swinford is deploying 198 Mythos and 44 Stormy Strobe fixtures, new from Clay Paky.  Morris Light & Sound in Nashville, the lighting, sound and rigging vendor for the tour, is among the first in the US to offer a big inventory of the new lighting instruments so it could easily fulfill Swinford’s specs.

“We’re never shy to be the first to do something,” says Morris president David Haskell.  “We like to be on the cutting edge.  And we know we have A.C.T’s support for the new fixtures.  The only problem with Mythos is that we don’t have enough!  I get calls daily for them; they’re going to have the same kind of impact on the industry as Sharpy did when it was introduced.” 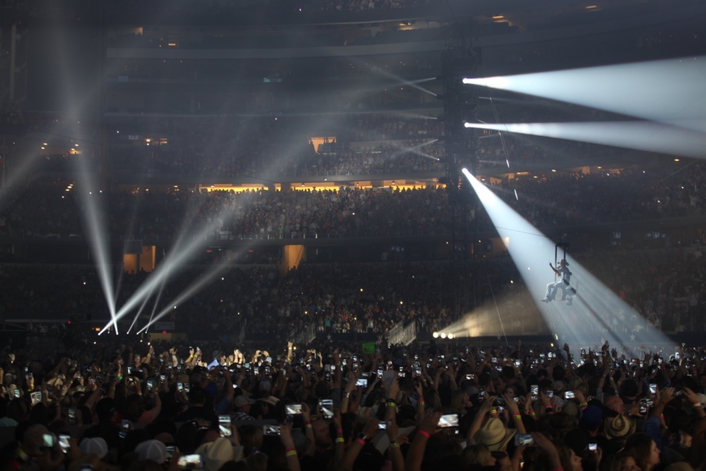 Mythos is a highly-advanced hybrid light which serves as an excellent 470-watt spotlight and an extraordinary beam light.  When he first saw Mythos Swinford was “completely blown away by its small package, its powerful look and low power consumption,” he recalls.  “Mythos is only 470 watts while everything else comparable is 1500-1800 watts.  When you have a rig the size of ours cutting power consumption by one-half or one-third is a big deal, especially when you’re playing 16 stadiums.” 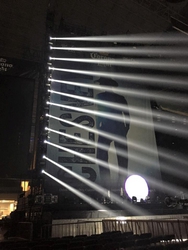 A fan of Mythos’s versatility, Swinford says  “It can produce a beam that’s two or three times brighter than Sharpy, and you can zoom it out and turn it into a more traditional, hard-edged spot. You can go from one mode to another very quickly.  Mythos even makes a pretty good wash-style light with frost in it.”

Swinford had no qualms about being an early user of Mythos when he specked it for the tour.  “I knew it was going to be a game changer for this kind of light,” he says.  “Clay Paky has come such a long way in developing and designing lights that are very reliable and very innovative.  They’re doing things that other manufacturers are starting to copy.

“So I decided to dive into Mythos in a big way for the tour.  In six weeks of rehearsal they proved to be outstanding, so I feel we’ve already broken them in.”

Swinford explains Chesney wanted the ability to light the audience more effectively, especially for his stadium shows.  So the lighting designer employed 20 Mythos fixtures in pre-rigged trusses around the scrims for the stadium package; they are repurposed along the dashers for arena shows.  “They give us our audience lighting package and also light the four-foot mirror ball.  When you put Mythos on the ball, you get the most fantastic mirror-ball effects you’ve ever seen: It’s so much brighter -- and the beams off the ball are so intense.”

Mythos fixtures are also mounted vertically on the spot towers out in the house at stadium shows.  A group of eight is positioned in the seats always left empty for light placement; six are behind the mix; six more are in the back of the field creating a very layered look.

Swinford notes that there are “a lot of video surfaces” in the show: a 48x17-foot backscreen flanked by 23x17-foot screens plus a 48x13-foot header suspended over the downstage.  “With all the luminance of the screens, the lighting package needs to be pretty powerful,” he says.  “Mythos does very well on that score.” 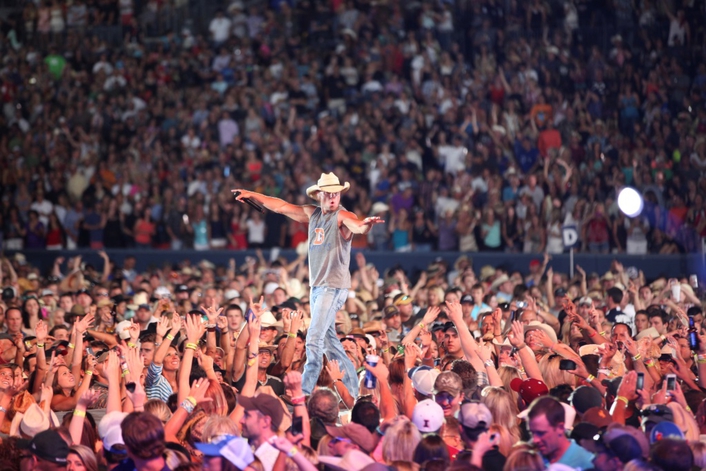 Stormy Strobes are scattered in ten fingers of upstage and downstage trussing and mounted on the side ladders with 28 Sharpy Washes.  “We wanted classic white strobe effects, and we get them with Stormy. They’re very bright and low power, so they’re very friendly.  And they make good work lights, too!”

The Sharpy Washes cross-light the band and enhance the video lighting.  Morris Light & Sound acquired Sharpy Washes 18 months ago. They continue to be a “highly popular item.  “People love the speed and output for the size of the lamp.  Clay Paky optics are, in my opinion, the best in the world,” says Haskell.

Francesco Romagnoli, Clay Paky Area Manager for North and Latin America, added, “It’s great when Mr. Swinford, Mr. Butts and Morris Light and Sound team up.  Their shows are always amazing and we’re happy to collaborate with them once again.”