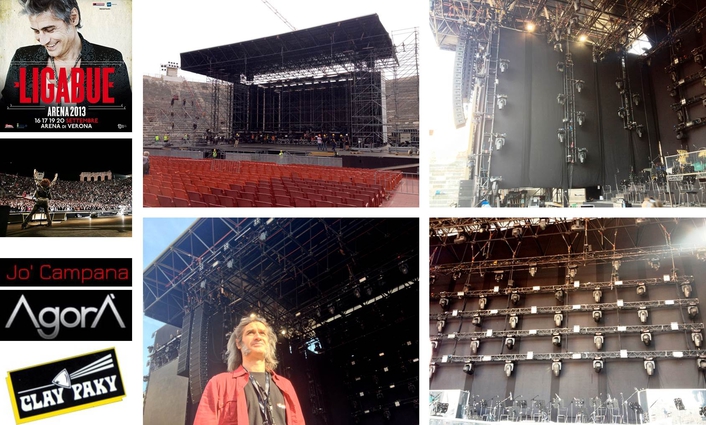 LD Jo` Campana in front of the arena stage building
Luciano Ligabue held six concerts in the fantastic and ever evocative setting of the Verona Arena in the second half of September. They were a great audience success. Fans rushed from all over Italy in order not to miss the chance to attend the only live events planned by the Correggio-born singer in 2013. The six evenings sold out in advance in one morning, during which all 72,000 tickets were bought. Besides the usual band, a real seventy-piece classical orchestra enhanced the concerts. Its contribution made the type of music the singer-songwriter performed highly unusual.

The show was split into three distinct parts. During the first part, Ligabue was accompanied by the orchestra. He performed some of his most famous pieces rearranged for the occasion by Maestro Marco Sabiu. Next came a part extended to electric musical instruments, followed by a section with a decidedly more rock feel, with the band only, where the true original nature of the singer's music emerged. 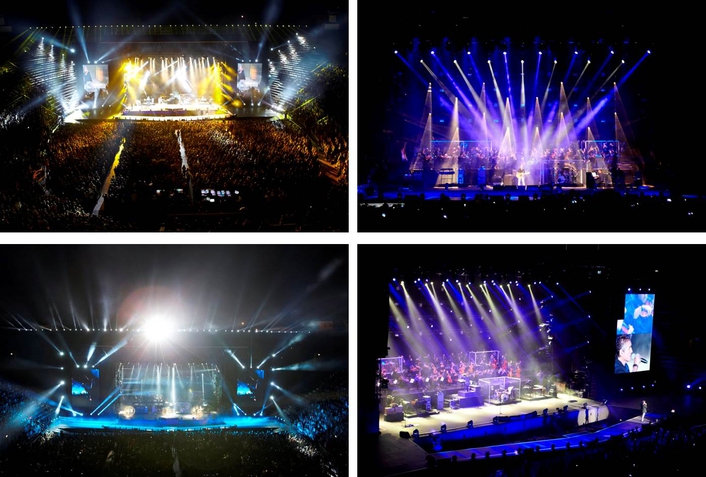 Such a variety of situations requires a careful and scrupulous rendition also in terms of lighting design. Jò Campana, who has been Ligabue's lighting designer for many years, briefly explained how he set out the work: "We had already been to the Arena in 2009 for a series of ten concerts. Therefore, to a certain extent, I already knew the lie of the land where I had to work: a clean look, essentiality and stylistic rigour. After all, we are in a first century AD Roman amphitheatre with an orchestra on stage. It therefore seemed dutiful to comply with 'classical' rules from the point of view of lighting design and management."

"To achieve this result, I counted on a considerable number of Clay Paky lights, which - as always - allowed me to do the job. Considering the short rigging time available, I needed 'certainties' and equipment that could guarantee efficiency and flexibility. These are two priority features that I think every motorized light should possess and that Clay Paky lights have regularly ensured me, to such an extent that Clay Paky has been my reference brand for several years. The rental company Agorà provided the lights for the concert, including 42 Alpha Beam 1500s, 41 Alpha Profile 1500s, 24 Alpha Beam 700s and 50 Sharpys.”

Jò Campana placed the Alpha Beam 1500s on the mother grid and, "thanks to their amazing versatility, they performed a twofold function: a colour wash effect when used with frost filters and a 'punchy effect' with a narrow iris when I needed to 'strike hard' with a big battery of tracer beams."

The Alpha Profile 1500s were hung on side trusses to illuminate the orchestra carefully and accurately, as well as for special effects with their excellent gobos. Twenty four Alpha Beam 700s highlighted the contours of the Layher structures and PA towers, and "they proved to be among the top lights in their category."

Lastly, fifty Sharpys were spread out along the top of the Arena steps behind the stage, covering an angle of about 55° with their penetrating beams. "I placed them 'off-stage' and rationed their use to highlight some specific moments of the show," Jò Campana said. "Thanks to this, they hit the mark and were a sort of truly special light among the others." 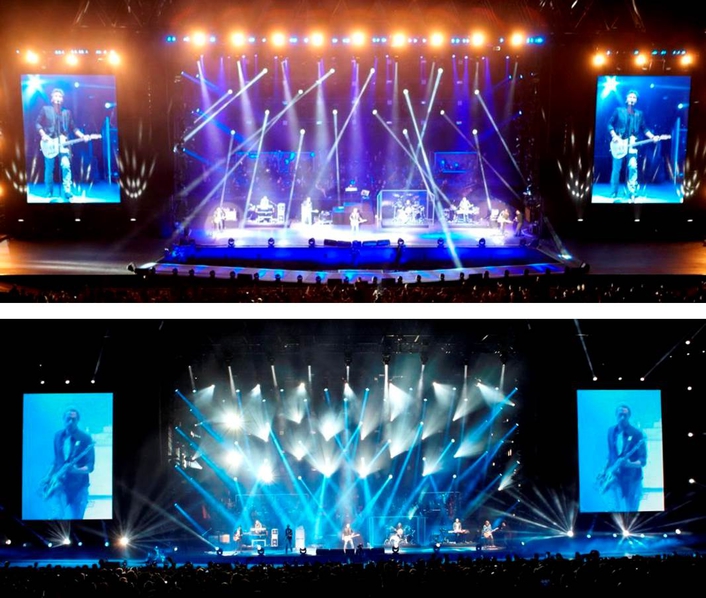 The lighting designer was yet again excited about the performance of Clay Paky moving heads: "Every light fully met my expectations and proved to have the requisites I have always considered fundamental: besides their well-known colour rendition and brightness, they proved to be absolutely reliable, even though they underwent a lot of stress and hours of use in sometimes difficult weather conditions. I would like to thank Wolfango De Amicis from Agorà for his great helpfulness, all the technicians, and - in particular - the Lighting Crew Chief Daniele Francescone. They are all highly qualified professionals and always create optimal conditions so I can work at my best."

The next appointment with Ligabue is next year, when he will tour the stadiums after the release of his new album expected by the end of 2013. "I would like to go on using the Clay Paky lights and I am convinced I will be able to. They are a rare example of leading world technology completely 'made in Italy'."