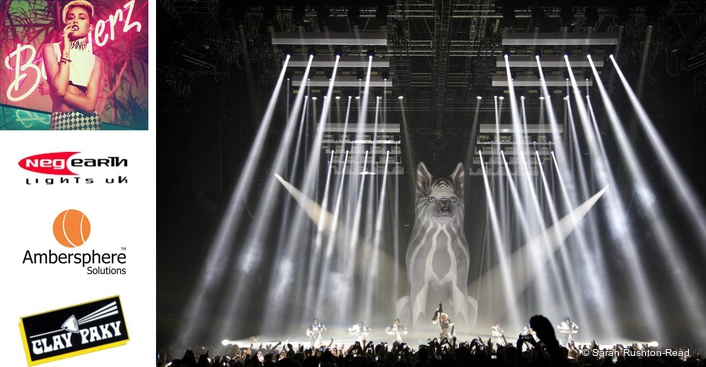 In addition to the fast-paced lighting is the production’s giant 40ft LED screen
Controversial popstress Miley Cyrus is performing her hit world tour ‘Bangerz’ under the super sharp, vibrantly coloured beams of the Clay Paky Sharpy and Sharpy Wash 330.

Fast becoming one of the most talked about touring shows in recent history, Bangerz features everything from giant tongue slides to flying hot dogs. Lighting designer Rob Sinclair, who has worked with Peter Gabriel, Queen, Pet Shop Boys and may others, collaborated with award winning show designer Ez Devlin to create the show’s unique look. 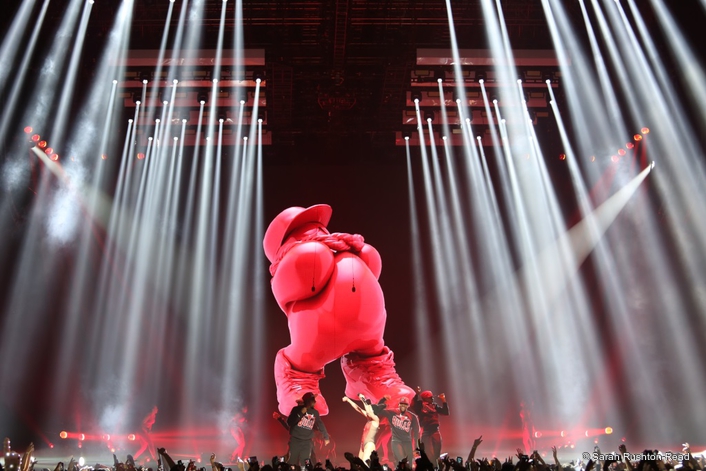 “The creative brief for the show was that it should be fun,” explains Sinclair. “We went for big, bold and bright looks. The show required punch after visual punch so we designed a high fashion pop lighting concept with plenty of bright colours and well-timed effects.

”In addition to the fast-paced lighting is the production’s giant 40ft LED screen, which dominates the back wall of the stage.

“The main challenge with going for this larger than life look was that we had to fit the lighting around the huge video screen,” continues Sinclair. “This meant we were working with incredibly high trim heights. I had to select reliable lighting fixtures that I knew could project long distances. I therefore turned to the Clay Paky Sharpy.” 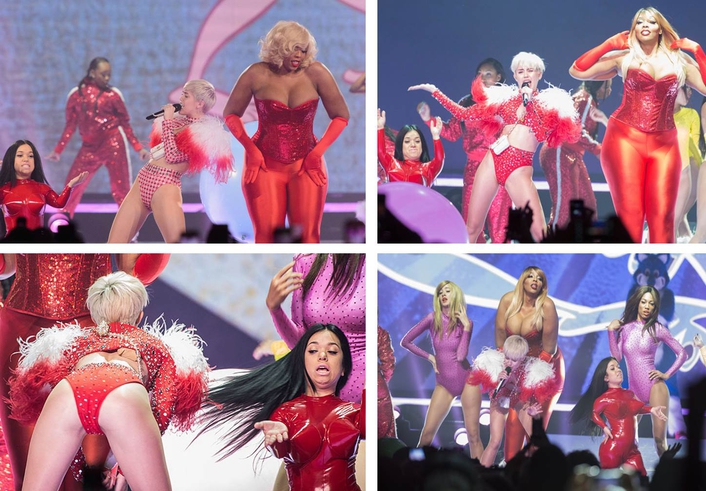 “I chose the Sharpy series because I needed fixtures that could hold their own against the other onstage elements,” explains Sinclair. “Quite a challenge as the video screen is so large. Nevertheless the beams of the Sharpy and Sharpy Wash 330 consistently cut against the video to provide the design with that extra punchy drama.”

Sinclair designed a large overhanging truss split into four sections, which combines lines of Clay Paky Sharpys with rows of LED light boxes, designed to mimic the stage floor. The Sharpy’s are used to shoot down between the boxes to create dynamic cages of light that move up across the stage throughout the show.

“The Sharpys are rigged from a series of identical short trusses over the stage,” continues Sinclair. “They’re also positioned over the runway and B stage creating fast paced aerial effects and highlighting Miley’s dance troup. The movement of the beams capture the energy of the performance and then shares it across the audience, ensuring everyone feels involved.”

The Sharpy Wash 330, which Sinclair is using to outline the stage, is an extraordinarily compact and lightweight washlight that is extremely silent and quick. The fixture is fitted with a complete CMY colour system and 6.5º - 48º zoom and adjustable beam angle for ultimate design flexibility. 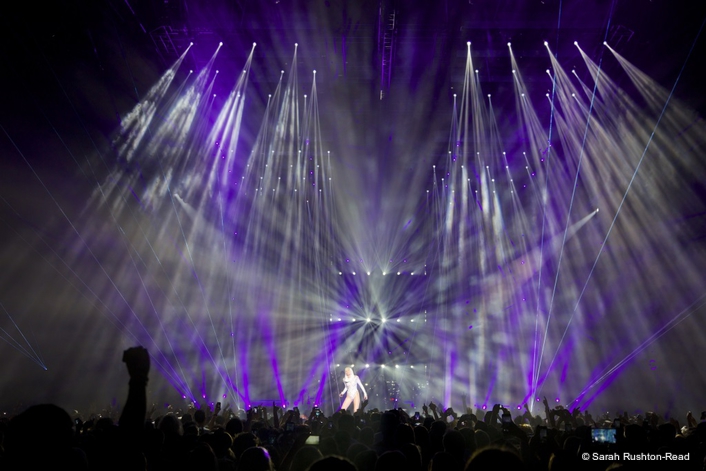 “The Sharpy Wash 330s are evenly spaced around the entire stage perimeter,” explains Sinclair. “The impressive adjustable beam angle and zoom means that I can use them as both floor washes, to create pools of colour complementing the pop-brights of the video, and as narrow beam fixtures that can mimic the Sharpys beaming down from above. The versatility of the Sharpy series really is fantastic.”

Miley Cyrus with Sennheis...ital 9000 on Bangerz Tour
SGM X-5s Put the Bang into Miley's Bangerz
Clay Paky Is Up ‘All Ni...ong’ with Lionel Richie