The Teatro del Casinò in Sanremo was literally taken by storm for the famous Vasco Rossi tribute band La Combriccola del Blasco's concert. The band was led by charismatic Kikko Sauda and - for the occasion - starred Maurizio Solieri, Vasco Rossi's long-standing guitarist and co-author of several of the famous Italian singer's songs. The show initially took place inside the theatre, and then continued in a hall suitably equipped to accommodate the audience and fans.

The first date of the new musical show designed by Larry Camarda, in conjunction with the staff of Pico de Gallo Service led by Gianmarco Maccario, sold out. It was a new way of presenting live music to the audience: high quality music in a beautiful venue, supported by the professionalism of the musicians and technicians involved.

Clay Paky's lights were of course there to illuminate the two-hour show, which went through the songs in Vasco's repertoire that he played and composed together with the virtuoso guitarist. 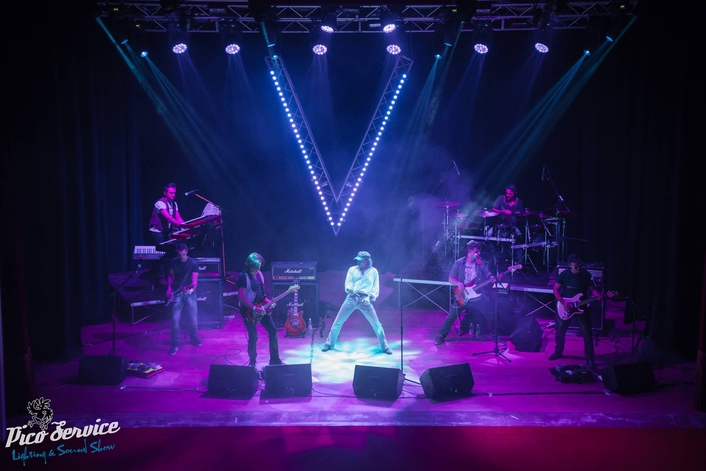 This dynamic concert, which Gianmarco Maccario entrusted to the young lighting designer Mattia Morganella, featured well-illuminated scenery and lighting effects, along with a powerful sound.

Morganella designed the set and programmed the scenes required for the concert, which will be followed over the next few months by other "Play the Music Show” evenings.

Four rows of battens were hung at different heights on the ceiling. The last batten was equipped with some A.leda B-EYE K10s, which are high-performance washlights, with a breathtaking beam, able to generate spectacular, entirely new visual effects.

The B-EYE K10 is innovative: the front lens may be rotated to create lots of small light compositions, which may be opened and closed like petals. By adding colour and dynamic graphics, the B-EYE turns into a truly unique effect light, capable of generating countless visual effects, unlike any LED luminaire before it.

A corner batten was hung over the stage together with the others. It was built to represent the letter V in lights and was equipped with some Clay Paky Show Batten 100s. These are mobile LED bars, ideal for professional stage lighting.  Its 100 cm (39 inch) long cylindrical aluminium bar houses ten high-power Osram Ostar RGBW LEDs. All the parameters of each LED may be controlled individually: colour, 8-bit dimmer and 24 Hz strobe. The Show Batten is compact, rugged and lightweight: it weighs only 10 kg (22 lbs). Several bars may be placed in a line or in an array in such a way that the distance between the LEDs is fixed. An internal Ethernet switch for IN/OUT daisy chain connection makes it easy to connect the bars together for pixel control in a matrix setup. 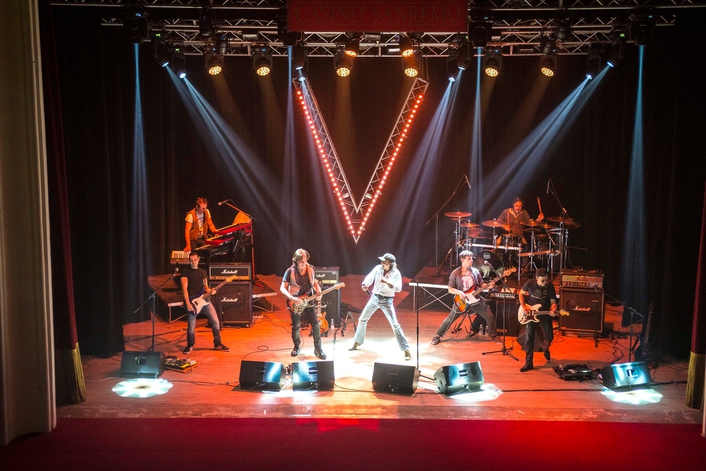 Sharpy moving heads were arranged along the front batten, along with other lights. They not only have 14 colours and 17 gobos, but the shape of their beams may be altered to achieve spectacular mid-air effects, since the gobos are on the same wheel.
The extremely small, lightweight Sharpy (48 cm x 19 kg / 19 inch x 42 lbs) can be placed anywhere, on trusses for live events and shows, on stages, in showrooms or in conference rooms.