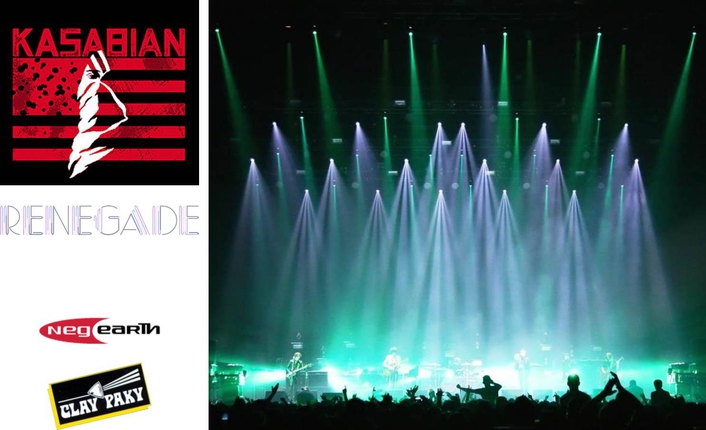 .
Lighting designer Nick Gray of Renegade Design has created an exhilarating and slick show for Brit rockers Kasbian’s major UK arena tour. Bringing power, reliability and vibrant colour to the design Gray uses an array of Clay Paky Sharpys and Sharpy Wash 330 fixtures, which he says these days never fail to feature in his rig.

The tour has so far visited major venues including Manchester Arena, Belfast Odyssey Arena and London’s O2 Brixton Academy. Supplied by Neg Earth, the Sharpys and the Sharpy Wash 330 fixtures are positioned high in the overhead rig to flood the stage with intense colours and provide stunning and dynamic, audience embracing aerial effects.

“Both the Sharpy’s and the Sharpy Wash 330’s range of saturated colour is fantastic,” says Gray. “They’re also really reliable. Important considering we were going into big arenas and we didn’t have a huge budget. We had to choose our fixtures carefully ensuring we had something that was good quality, feature rich and robust. I also wanted to use B-EYEs but that was not to be this time, however, I’m really looking forward to using them, and the Stormy Strobes, for the festival season next summer.”

The design is a multi-layered and fast paced with each fixture working hard for it’s money. Gray has exploited every dynamic feature to deliver a light show that complements the video, embraces the audience and punctuates each musical nuance. Working collaboratively with programmer/operator Rob Gawler the resulting show is extremely tight and cue-rich with every visual effect delivered in beat-perfect synchronicity with the band.

“Kasabian’s music is all about huge builds and drops – drawing the audience in and then knocking them back,” continues Gray. “The guys are all fantastic performers so I’m pretty relentless with the lights and screens. The audience experience is a spectacular sensory overload – they love it and go mental!”

Gray says he and The Bands main man Sergio Pizzorno have similar artistic tastes and so made the decision to collaborate on the video content design for the tour, inspired by psychedelic 2009 film ‘Enter The Void’. The Sharpy Wash 330’s stunning texturising effects bring a further 3 D effect to the look, perfectly complementing the visuals and further enthralling the audience. 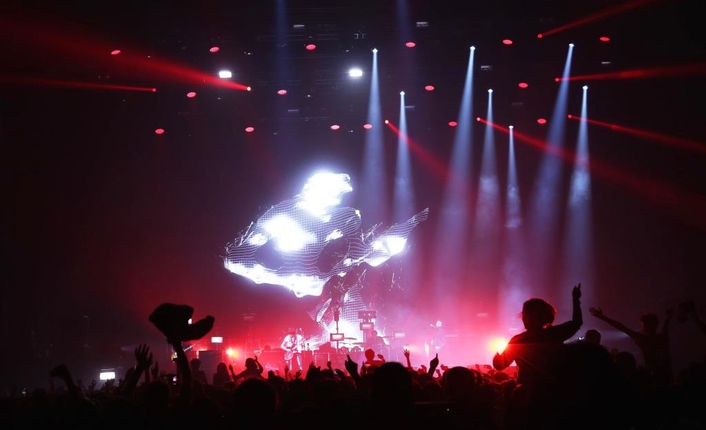 “The Sharpy’s and the Sharpy Wash 330s are working really hard on this tour, they give me plenty of creative variety in terms of looks and they move really fast.” concludes Gray. “I’ve always been a fan of Clay Paky – the company is a true innovator. Anyone can do the next stable version of someone else’s light but it’s about having the idea first, and Clay Paky does that every time.”