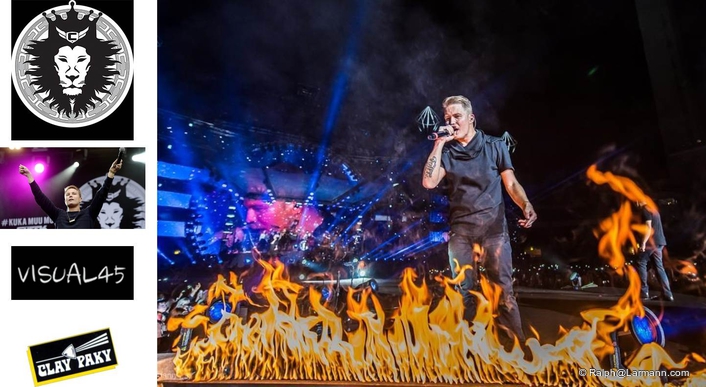 .
Finnish rapper Cheek recently made part of pop music history with a sold out show at the Olympic Stadium in Helsinki. To ensure the show packed a huge punch, Eero Helle and Mikko Linnavuori from visual design company Visual45 chose an array of Clay Paky fixtures to add power and reliability to their bold design.

Cheek enlisted Visual45 to create the entire show design, including staging, video content and lighting, after the company designed two of the rapper’s sold-out shows back in 2013 at the nearly 8000-capacity Ice Hall in Helsinki.

“After the Ice Hall shows, the artist was really impressed with our work so got us on board for the fantastic Olympic Stadium concert,” says Helle. “Our brief was to create something completely exciting and never-seen-before for the artist, so working closely with him we specified the Sharpy, Alpha Beam 1500 and Alpha Spot HPE 1500 fixtures from Bright Finland. When it comes to choosing moving lights, I like fast, smooth and reliable fixtures with super powerful output and that’s exactly the kind that Clay Paky makes. The fixtures also produce really vibrant colours, and the gobo selection is fantastic.”

The Sharpy is a 189W super quick and lightweight beam light, with unprecedented brightness usually only achievable with far greater wattages. The Alpha Beam 1500 is also incredibly powerful, generating a solid, super-concentrated parallel beam for long-throw projections, whilst the Alpha Spot HPE 1500 delivers impressive graphic effects thanks to its array of colour and imagery devices, including 20 gobos on three wheels. This gave the Visual45 team unlimited creative possibilities when it came to designing something fresh and innovative for the significant show.

“The whole design was based on a large LED video wall and so I needed fixtures that could hold their own against it,” says Helle. “At some points I wanted to merge the two, making the lighting part of the video. For example, for one specific look I used the circle gobo from the Alpha Beam 1500 next to video content of a starry sky, which looked awesome in the huge open space of the Olympic stadium. It’s a moment I’ll remember forever, and the moment I fully realised just how powerful the Clay Paky fixtures are.”