An American country music band from Texas, The Eli Young Band released its “10,000 Towns” album earlier this year.  During its career the band has had three singles reach number one on the Billboard country charts.  The band is currently on a North American concert tour and just finished hosting its popular yearly House Party concerts on back-to-back weekends at Globe Life Park in Arlington, Texas and Minute Maid Park in Houston.

“The overall design of the tour is high-impact versatility,” says lighting designer David Carr.  “We deliver a lot of speed with fast moving lights and design.”

Carr uses eight Clay Paky Sharpys as floor lights for the concerts.  “I used them on a corporate show before, but this is my first time in a touring situation,” he notes.  “I love the brightness of the beam; it punches through just about everything.”  Morris Light and Sound, a full-service production and integration company in Nashville, TN is providing the lighting package for the tour. 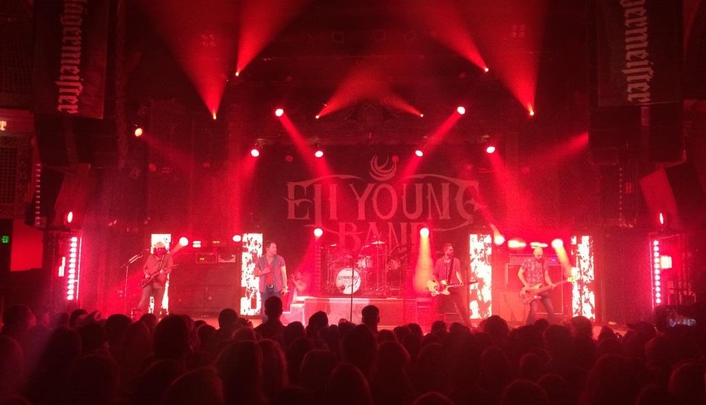 For the Eli Young Band House Party in Houston Carr added a dozen Clay Paky A.leda B-EYE K-20 fixtures from LD Systems, the systems integration and production company headquartered in Houston.  “The punch and zoom range they have for an LED is amazing, and the effects package is great,” Carr declares.  “We plan to add B-EYE K-10s to our touring package next year.”

Francesco Romagnoli, Clay Paky Area Manager for North and Latin America, added, “It’s great to see our Sharpy and B-EYE fixtures work so well together.  They are the perfect one-two punch for any show or event.”