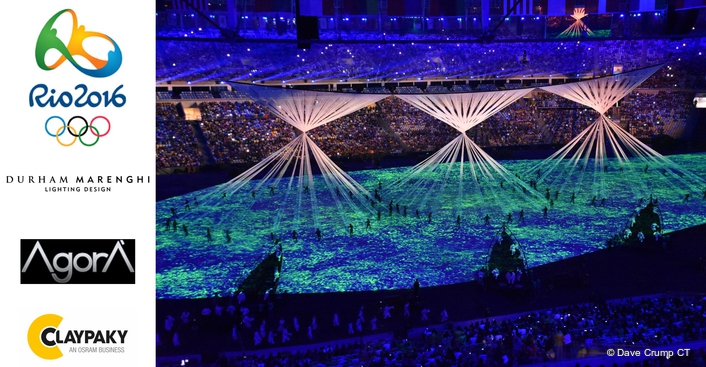 Working to a very tight budget with limited weight loading for the roof Marenghi needed fixtures that were highly versatile and compact and that could produce a high output beam on minimal power consumption.

“We needed workhorse fixtures with extremely good optics,” says Marenghi. “The fixtures needed to be extremely high output, with a lightweight build and whose focus was bright and tight enough to cut through the projection and be picked up by the shows cameras. For this detailed work we selected the Clay Paky Sharpy, Alpha Beam and the Mythos. These fixtures produce a fantastic optical train that gives superbly bright pin spots of light.”

The Sharpy, an industry stalwart known for its powerfully bright 189W moving beam worked alongside the incredibly versatile Clay Paky Mythos – an advanced hybrid fixture that is both a spotlight with a 4°- 50° electronic zoom and a beam light with a 160 mm-diameter. Together the pair won the race to light the opening and closing ceremonies illuminating the world-famous Olympic torch to estimated worldwide audiences of 3.5billion.

“The Olympic torch this year gave us a unique opportunity,” says Marenghi. “Normally the torch produces a huge amount of light but this time it had a small low energy flame bowl which sat in front of a large mirrored sculpture.  I decided to make every moving light into a pin spot of white and gold that reflected the mirror effects and amplified the firelight. The laser like beams of the Clay Paky Mythos and Sharpy assisted us in lighting the whole stadium in this way – a cauldron effect that has never been seen before on the Olympic stage!” 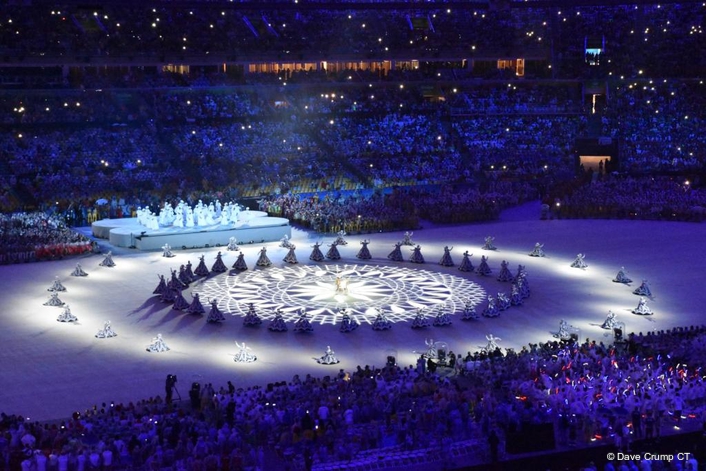 Not short of challenges, the renowned designer also had to compete with Brazil’s wintertime weather which came to a peak in a rainy deluge during the Olympics closing ceremony. Luckily there was another Clay Paky fixture on hand which was more than capable of competing with the elements.

“We used the Alpha Profile 1500 as our main key light says Marenghi. “We had them in weather domes initially, but took the domes off whenever possible due to the shallow angle of projection which meant shadows of the domes were falling onto our stage. All the key lighting had to be carefully controlled and the Alpha’s ability to return accurately from focus to focus in terms of position and shuttering saved a lot of focus time for our programmers.”

The Alpha Profile 1500 is a cutting-edge professional beam shaper that combines the high output power of a 1500 watt lamp with an exclusive, patented framing system that is capable of creating any shape. Marenghi used 194 of the fixtures alongside 130 of its sister fixture the Alpha Beam 1500 known for its super concentrated, long throw parallel beam from its 1500W Lok-it discharge lamp.

“The Sharpys provided their usual unique blend of tight high contrast beam and fast movement speed and the Sharpy washes were used for back lighting the audience and up lighting the roof structure and again their high output and light weight alleviated some of the roof load concerns.”

Originally from Lancashire, England, Marenghi is a veteran when it comes to lighting and the Olympics. He designed the lighting for all of the Turin Winter Olympics Ceremonies in 2006, the London 2012 handover at the Beijing Olympics closing ceremony in 2008 and the Sochi Winter Paralympic Games opening and closing ceremonies in 2014. His describes his experience in Rio as “fantastic”, maintaining that he and his team created “helped to prove that you don’t have to be a mega power, super rich country to produce a theatrical and beautiful Ceremony”