.
The magic stage of Melodifestivalen, the local song contest to decide Sweden’s representative song at Eurovision, was once again alive with Clay Paky fixtures. The powerful Mythos played a crucial role in the 6-week tour of Melodifestivalen 2015 visiting 6 cities across Sweden with the Finals held at the massive Friends Arena in Stockholm. Viewed by approximately 4 million in the television audience, it is Sweden’s most popular television program.

Lighting Designer Fredrik Jönsson of Eyebrow Designs in Stockholm designed the lighting of 28 songs in a total of 6 live broadcasts by SVT (Sveriges Television), the host broadcaster of Eurovision 2013. 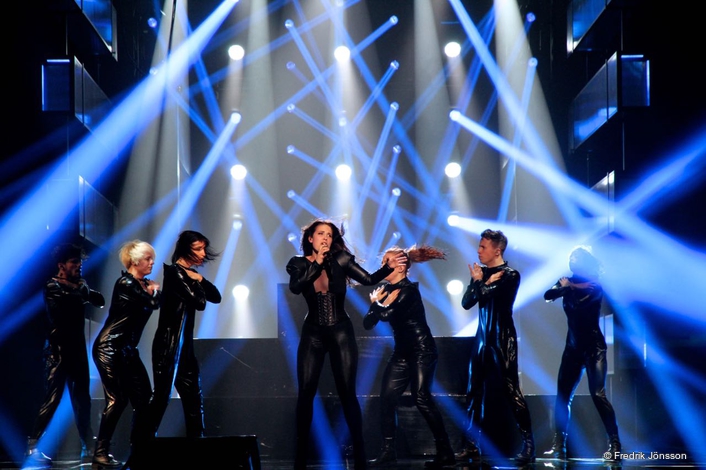 Jönsson explains, “Once again, Clay Paky provided the backbone wow fixtures, including 51 Sharpys and 24 Sharpy Wash 330 fixtures, but this year we had a new cat among the usual suspects - the mighty Mythos from Clay Paky! 26 to be exact. It turned out to be a fantastic compliment to the rest of the rig. The brightness of that thing is just stunning and we used it with great effect! It just cut through anything else we had on stage and made a true impact on the design. It is very versatile since you´ll get both a Sharpy on steroids and a big breakup beam whenever needed.” 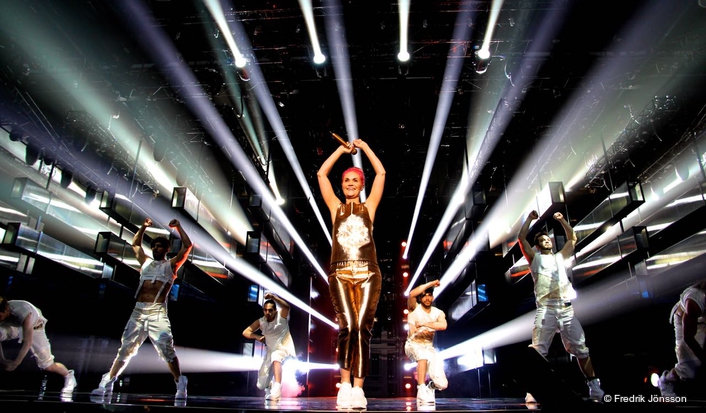 But that was just for the local tour shows. For the 65,000 capacity Friends Arena, Jönsson added on another 69 Clay Paky Sharpys and 24 Clay Paky Alpha Profile 1500 fixtures. “I’ve been a huge fan of Clay Paky for years. They already have a fantastic product range but continually come up with something brand new and sexy like the Mythos.”

He goes on, “The set concept this year was mostly about the 40 box structures housing light tubes hanging downstage and upstage. Because it was crucial to be able to visualize the actual positions of the lights in relation to the boxes in order to position the lights where they could give me most bang for the buck, we worked with the lighting and boxes in WYSIWYG. The boxes were more than slightly in the way, so positioning the lights correctly was the most important decision of the design. I think I went through 14 versions before settling on the final design.

“Overall, it turned out to be a good year, the tubes and the black shiny floor created a fantastic depth for the cameras and together with my ”tower of power” and my ”wall of death” equipped with Sharpys, Mythos and strobes in the back of the stage, it turned out pretty good!”

The final performances get a percentage of winning votes from an expert jury and the rest from call-in votes from the Swedish population. In the final tally, Måns Zelmerlöw won with the song ”Heroes” which can be seen at www.youtube.com/watch?v=ZhfLQrw3Sss.