.
LD Aldo Visentin, after the excellent impressions got in Frankfurt, has decided to include the Clay Paky A.leda B-EYE in his lighting design, and they certainly "contribute to the consensus and successes", that Andrea Bocelli's new concerts are achieving in the United States, up to the final event at Madison Square Garden "where all eyes were focused on us". The lighting design and specifications by Aldo Visentin will probably be confirmed for at least Bocelli's up and coming commitments.

The production of shows, of one or more concerts in different continents does not always reflect the organisation of a tour that requires a combination of well defined organisational, managerial and strategic activities with regard to the supply of the materials and resources required: the same material is not always available at each location, it must be requested each time, with the risk of having to compose a different lighting system from that planned.

In the United Kingdom and the United States, where the organisation of concerts is similar to that of a Tour, it is possible to create a light design to state-of-the-art standards.

"The project of this new lighting design - comments the lighting designer Aldo Visentin - started with the idea of using the amount of light produced by LED Wash projectors" and leaving out the discharge light projectors “used for years in the previous sets. The lighting element that can best tell the story of Andrea Bocelli's music is undoubtedly the color".

So the choice to enhance the lighting contribution of the Wash projectors is 'structural' to the vision that Visentin has of Bocelli's musical show: “After a series of ‘tests’, I decided to introduce a new set of lights - 46 A.leda B-EYE K20”.

A practical choice, and not exactly an aesthetic choice, although this is a projector that boasts a highly innovative concept! A.leda B-EYE, versatile and spectacular, performs exactly to meet the production and design requirements of Aldo Visentin.

"I needed a projector that could always guarantee a homogeneous light coverage" with the various setup of the structure, from 8 to 17 meters in height, both for the extremely crowded stage "which hosts a large orchestra together with the choir: about 130 people to be correctly illuminated". The outstanding versatility of the optical system of the A.leda B-EYE (an impressive zoom from 4° to 60°) maintains the uniformity and quality of the colors of the light emission, in all opening or closing conditions of the beam.

"Another fundamental aspect is the color temperature. The stage is 'normally' illuminated (when the orchestra is not playing) with a white light". A.leda B-EYE is even surprising with the projection of white light only. Thanks to the installation of a white chip and its algorithms, in addition to calibration of the saturation and brightness of the colors, it accurately adjusts the color temperature parameters of 2500-8000 degrees Kelvin and emulates the behaviour of different types of tungsten lamps. An algorithm which also affects the stability of the variations in intensity.

"Thanks to the characteristic of high performing uniformity and homogeneity of the color crossfade and, even better, the intensity (dimmer), I am free to decide (according to the various locations that host the concert, halls, buildings but also places of historical or architectural interest) to use slow and very long scenery changes, to such an extent as to make them almost unnoticeable".

In terms of versatility, color and emission quality, A.leda B-EYE is also a sophisticated and stylish effects projector. Such a wide range of effects is the ideal creative condition that allows me to "generate those which most suit my vision of the show. An aspect that attracted me for the reason illustrated earlier on: Andrea Bocelli's shows are always very different, for a number of reasons, the different countries, the locations, the local hosts, the orchestras and singers whether Opera or Pop. The repertoire and musical atmospheres always change from one show to another, even on the same tour". 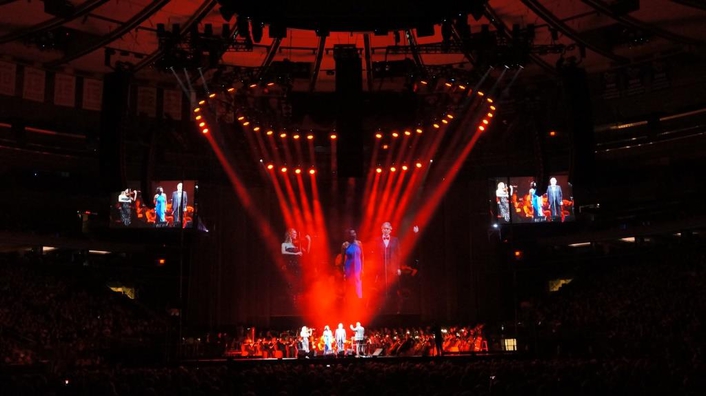 And the lighting effect for the music changes accordingly. The color of Bocelli's musical show changes. Aldo Visentin requires high levels of versatility to setup the stage lighting show and the projectors he has chosen provide unbeatable results.