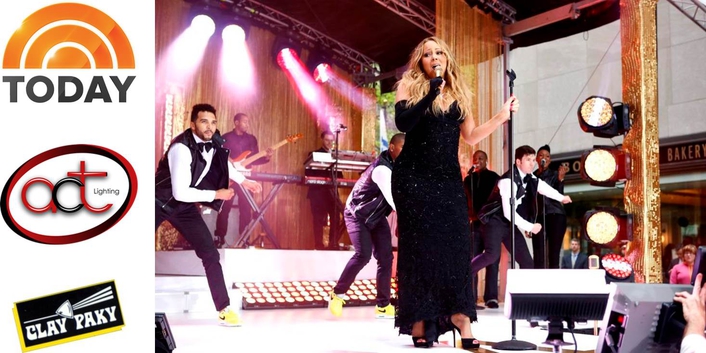 The early-morning outdoor concerts pose several challenges
The Summer Concert Series has launched on NBC’s “The Today Show” and Clay Paky’s A.leda B-EYE K20 LED-based moving lights are being deployed on the live music segments, which air at least once a week on the iconic morning show.

The concert series is a popular feature on “The Today Show” every Friday from late spring through the summer; performances are sometimes staged during the week, as well.  The concerts launched with Mariah Carey and have showcased Tim McGraw, Cher Lloyd, Rascal Flatts, Sara Bareilles, Train, Little Mix, Fallout Boy and Phillip Phillips.

The night prior to a concert a mobile stage rolls onto Rockefeller Plaza outside “The Today Show’s” picture windows.  Lighting is rigged and programmed overnight so a rehearsal can be scheduled for 6:30 am.  The concert begins with the first of a three-song set around 8:25 am; two more songs wrap up the show from 8:45 to 8:55.  When the program concludes the stage is dismantled.

Peter Greenbaum, who became lighting director of “The Today Show” when the program implemented its new set and look last fall, is working on his first Summer Concert Series.  He implements up to 20 A.leda B-EYE K20s, supplied by WorldStage, in the lighting rig on the mobile stage.

Greenbaum was introduced to the B-EYEs by programmer and assistant lighting director Brian S. Davis.  “I had never used them before, but when we found out that WorldStage was carrying them and that they were able to make them fit into our budget we jumped on them,” says Greenbaum.  “The B-EYEs are perfect for a concert rig.  We really like them a lot.”

The early-morning outdoor concerts pose several challenges.  “We need to keep the video level on the talent from the front while masking the sunlight coming from behind and the buildings around them.  We also want to keep the talent kind of even with the audience in the canyon of Rockefeller Plaza. Plus, there’s a roof on the stage,” Greenbaum reports.  “My outside lighting director, Phil Grosso, and I do our best to help video engineer Mike Ruiz make great pictures.”

His base package of B-EYEs features 10 fixtures rigged on an arched upstage truss to light the talent and four on a downstage truss for audience lighting and eye candy.  If a larger lighting package is required Greenbaum also places B-EYEs on the stage floor, the downstage truss supports and the lip of the stage.  “Every concert has a different stage plot to deal with,” he notes.  “We try to make it exciting for every band.” 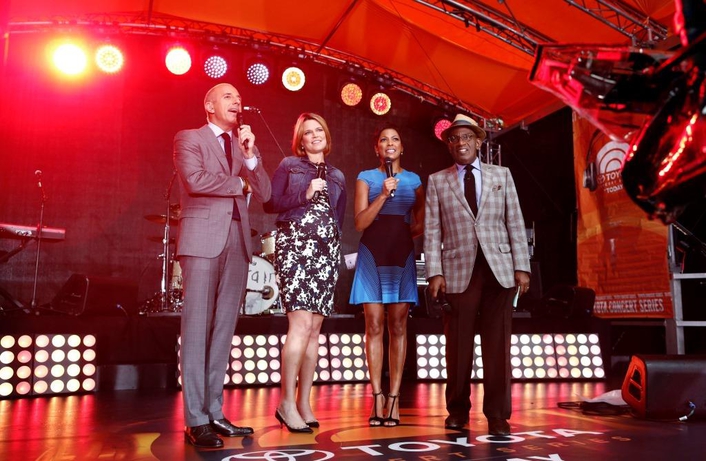 Greenbaum says, “I love everything about the B-EYEs: the flexibility of going from spots to floods, all the colors, the rotating functions, and all the eye candy that comes with the unit – you can go from eye candy to a great video level with the push of a button.”

One of his favorite B-EYE features is daylight color.  “We do a lot of interviews with the talent on stage and ‘The Today Show’ hosts with their backs to the audience,” Greenbaum explains.  “We go daylight in the B-EYEs and get a beautiful video level so there’s no need for HMIs.  Their color temperature is pretty amazing.”

The lighting director is a long-time Clay Paky user.  “I remember their moving mirror lights in clubs in the city and Europe,” he says.  “Now I’m regularly using Sharpys and Sharpy washes and am delighted to add B-EYEs to my repertoire.”

Francesco Romagnoli, Clay Paky Area Manager for North and Latin America, commented, “The B-EYE is perfectly suited for daylight situations because of the light is bright and the fixture looks so good on camera.  It’s great to see it put to such good use on the Today Show.”