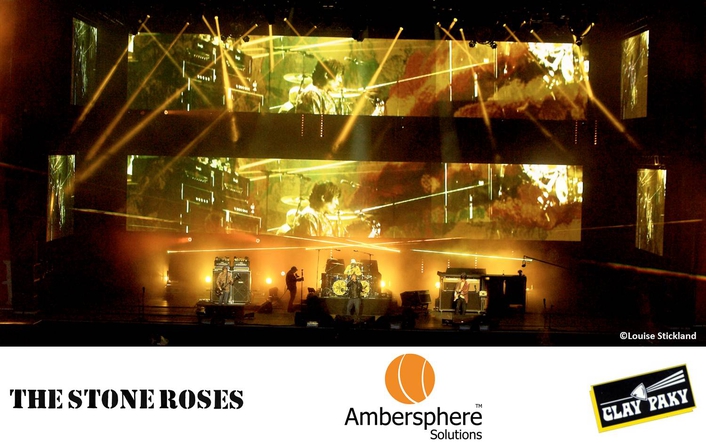 .
In one of the biggest comebacks of recent times, the Stone Roses chose to work with renowned Lighting Designer Paul Normandale to design what can only be described as a awe-inspiring light and video show to complement their highly anticipated reunion tour this summer.

Amongst other fixtures sharing the stage with the iconic Mancunian band were Clay Paky Sharpys, with the entire show being controlled by the grandMA2 full-size.

‘The Stone Roses are a band that focuses on the impact of the music, rather than big production going on around them, and so our challenge was to create a light show that doesn’t overwhelm the music but allows the audience, and the band to ‘feel’ the lighting design connecting to the music,’ noted grandMA2 programmer Glen Johnson of Lite Alternative.

‘We would describe the Stone Roses show as a ‘busk show’ – it isn’t completely pre-programmed. Using the grandMA2 allowed Paul [Normandale] to run the show how he wanted to, and with a degree of flexibility and options. You must have a reliable desk to allow this flexibility and ad-hoc creativity in a live environment and to manually change key lighting elements to reflect the mood and the pace of the music, and the band’.

The lighting featured a number of brands, amongst them Clay Paky Sharpys.  It was the first time that Normandale had used the Sharpy, and he chose it specifically because he wanted a ‘bright, tight, narrow vertical beam’. He is clear that it proved to be the right choice. ‘The Sharpy performed perfectly.  Against large scale video screens they were definitely bright and offered a different linear look’ he says. ‘I’m impressed with the size and weight of the fixture, relative to the powerful output, and on the back of the experience I have had with the Sharpy on this tour, I know I will be specifying them again’ he continues.

Johnson adds ‘The Sharpy isn’t a big standard moving light, and we specified it precisely for the tight finger-beam it offers, the speed of the fixture, and to create the ‘forest look’ that Paul wanted. Another major plus of the Sharpy is that it is extraordinarily effective at ‘packing a punch’ in early evening daylight. It’s an interesting light, which offers some really different effects and different looks to a show. And ‘different’ was very much what we were trying to achieve’.

‘Clay Paky’s star is rising and they have been developing some impressive kit,’ says Johnson. ‘With the current price of products and the need to get a recognisable return on investment, we have to ensure we are buying kit that is going to last. With the Sharpy, and now the QWO800, Clay Paky is offering us that combination’.

‘What we appreciate about Ambersphere Solutions as the exclusive UK distributor for Clay Paky and MA Lighting is that we have a UK based presence who are trustworthy, and provide the customer support and backing that we require. An understanding of the issues we are faced with when we are on tour is critical in this business, and we have that relationship on-going with Ambersphere’, says Johnson, with Normandale adding ‘It is their specialist knowledge on a specific range of products that works for us’.