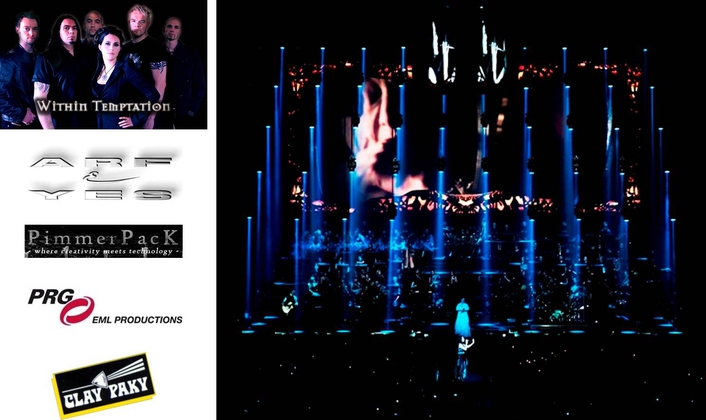 Elberse, who worked along set designer Ignace d'Haese from Arf & Yes, used the Alpha Beam 700’s fast moving ability to generate some stunning and dynamic mid-air and onstage effects. The result was a light show to remember at the 18,500-capacity Antwerps Sportpaleis in Antwerp, Belgium.

Supplied by PRG / EML Belgium, 50 Alpha Beams were placed on the floor in between the orchestra and band, and a further 50 Alpha Beams were flown on trusses. Each of the flow fixtures were rigged on an individual drop-arm that could drop 10 metres creating a dramatic, multi-dimensional environment for the band to perform in.

The Alpha Beam 700s don’t just feature Pan and Tilt,” explains Elberse. “They also feature a dmx-controllable Z-position. In combination with the other fantastic features the Alpha Beams offer, this opens up many artistic options when creating a unique look for each song.”

“Clay Paky has specifically designed the Alpha Beam 700 to enable lighting designers to realise their most innovative ideas,” continues Pio Nahum, chief commercial officer for Clay Paky. “The fixtures are small and lightweight so can be rigged almost anywhere. They feature a fast-moving body that incorporates advanced technology. This enables designers to generate strong parallel light beams that will be visible even in the brightest of scenes.”

In addition to the Alpha Beam 700s, Elberse specified 12 Alpha Profile 1500s. “The Alpha Profiles were used as key-light for the band,” continues Elberse. “With the high trim and the bright beams from the stage, I needed a powerful profile fixtures with a tight zoom. With the CMY and CTO system, I could create all desired colours, which looked as good live in the show as they did on camera.”

“Pim’s design made excellent use of the Alpha Profile 1500 professional beam shaper, which combines the high output power of a 1500W lamp with an exclusive framing system capable of generating any shape,” continues Nahum “He also created some breathtaking effects using the super fast zoom.”