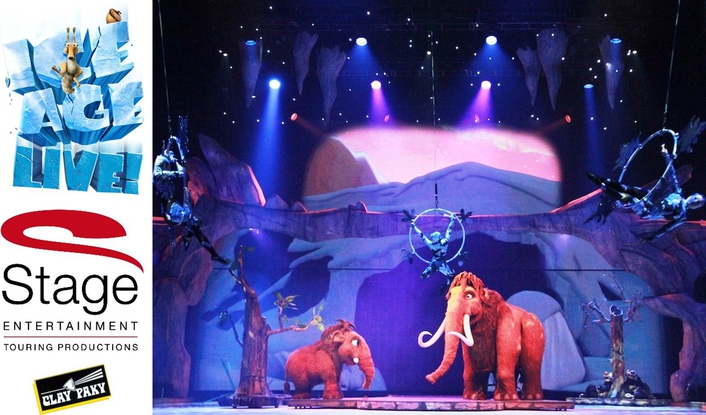 A substantial cast of Clay Paky Alpha 1500 HPE Spots and Profiles have been dazzling young audiences on the Ice Age Live!
Respected lighting designer Luc Peumans of Painting with Light specified a large number of Alpha Profile 1500 to provide special effects along with even more Alpha Spot HPE 1500, many of which incorporate bespoke made gobos for both projection and masking to prevent spill when projecting onto the set.

Peumans choice was based on the extensive tests he had done last year, while designing the popular Holiday on Ice show: Speed, which will be touring the UK this year. He decided then that Clay Paky fixtures were “the best fixture for the challenging and fast paced environment that is a stage made of ice! They give a lot of output for the wattage; they have excellent projection quality, great frost functions and they are super fast. This makes them the ideal choice for me and for this particular environment. We chose Clay Paky fixtures for their excellent optics and long throw, which makes them great for creating the atmosphere I wanted.”

Peumans rig design is Cathedral like. He uses the fixtures in a variety of very clever ways, some of which are quite experimental! “I have five 1500 Profiles that have been converted into partly manual operated follow spots,” explains Peumans. “We added two control wheels to change the necessary parameters like maximum intensity and beam size. Over a long distance range it’s hard to get the same light intensity on the characters. The manual iris control on the fixture doesn’t only control the iris but it also controls the zoom through the console. We wanted to automate this to ensure a consistent light level across the wide playing area.”

“Clay Paky’s Alpha Profile1500 and Alpha Spot HPE 1500s are well known for their powerful zoom functions and high definition projection,” states Pio Nahum, chief commercial officer for Clay Paky. “Both the Profile and Spots feature a range of effects ideal for theatrical events and, as Luc Peumans so cleverly demonstrates, at the same time they are versatile enough to allow for experimental use.”

With a large video backdrop, part of Peumans role was to collaborate with video content designer Jean-Luc Gason to create three-dimensional visual lighting effects that compliment the video world. This is where 300 custom-made gobos came in. Installed in the Alpha Spot HPE 1500s, some replicated images or atmospheric effects within the video content bringing the video environment out onto the ice. “It was an exercise in unity,” explains Peumans. “The ice is a big white surface on which you can paint with lights. The ice makes an excellent projection surface that can either blend with the video wall or contrast with it, depending on what we choose to do with the lighting.”

Ice Age Live! is a complex show. Many of the skaters and performers are dressed in supersized animal costumes, some of which are flying or doing mid air acrobatics while the performance space itself comprises various moving levels. Peumans lighting canvas is therefore everything from the ice to the top of the video screen. The challenge is to light this effectively for everyone without blinding the audience or getting too much spill, especially given the audience is viewing the show from three sides of the stage.

Peumans discusses: “The staging is radio controlled and wireless, so we have some complex and dynamic choreography that interacts with the moving platforms. In addition there are a number of acts that perform in mid air. This dynamic staging has led to the need for some fast moving energetic lighting. The strong and dramatic power of the Clay Paky Alpha range plus fast response and precision focusing means they are ideal for highlighting every part of the action, wherever it happens.”

Ice Age Live, produced by Stage Entertainment Touring Productions, is based on the popular animated movie franchise from 20th Century Fox, but has its own unique storyline. It premiered at London’s Wembley Arena on Friday 2nd November and is toured the UK before it moved on to Germany on November 8th. 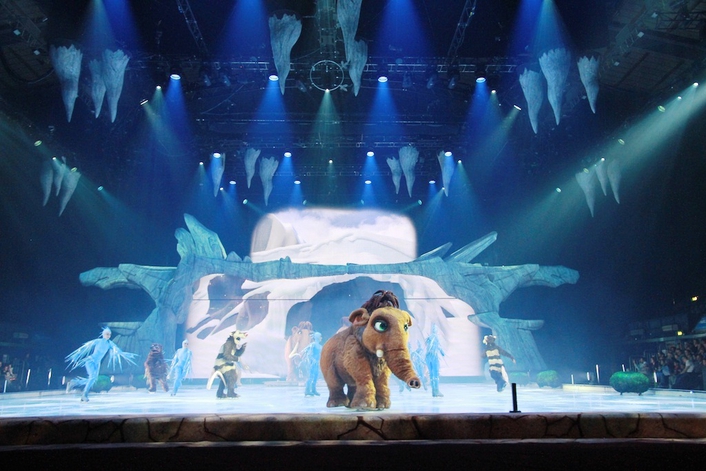