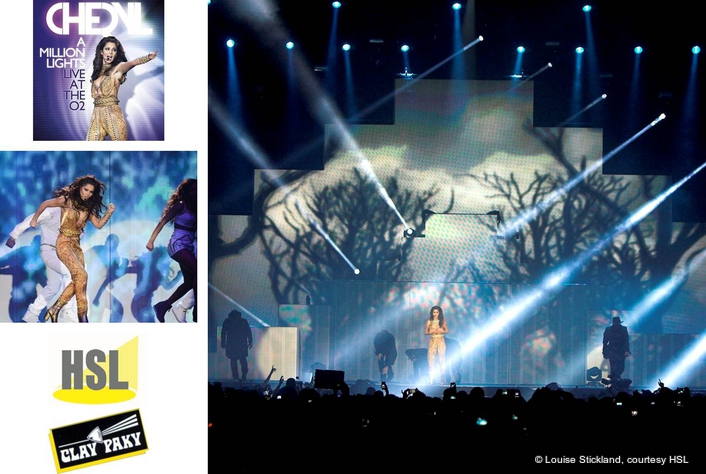 A troupe of Clay Paky Sharpys has added high-impact layers to pop princess Cheryl Cole’s visuals-led tour
Lighting designer Peter Barnes – dubbed the UK’s ‘guru of pop lighting’ - specified 14 Sharpys rigged on the back truss on drop-bars and ten on the stairways, all mimicking the shapes of the LED screens on stage. A further ten Sharpys were positioned on a flown box truss just in front of the FOH position.

“The Sharpys were the only fixture I knew would give strong defined beams powerful enough to be visible against the intensity of the LED screen that made up the pyramid shaped fascia to the set and the backdrop,” says Barnes. “They were also small enough to be placed on the stairs without being a hazard to the dancers.”

HSL supplied the Clay Paky Sharpys and the tour was project managed for HSL by Mike Oates.

“The Clay Paky Sharpy is a real work horse in our moving light stock - we can’t get enough of them,” says Oates. “It’s nice to have a small fixture that can cut through and create some stunning looks especially in today’s touring market where the sets are always digital so you are having to create a balance against a massive amount of LED Video.”

“We are delighted to see the Clay Paky Sharpy being used so creatively,” comments Glyn O'Donoghue, managing director of Ambersphere. “Yet again Peter Barnes has delivered a very individual look with the Sharpys and the impact they make as part of the show is phenomenal.”

Cheryl Cole’s A Million Lights Tour was her debut solo arena tour, and visited ten cities across the UK and Ireland during October.