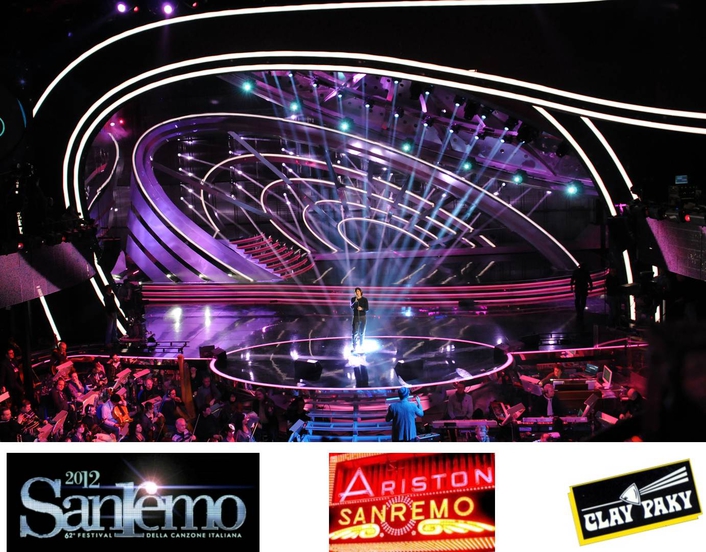 The “musical spaceship” took three months to put together and was entirely built in Rome
The 62nd Italian Song Festival did not disappoint the expectations of those who expected all round entertainment, including impressive stage design, abundant lighting effects and a production designed to exploit all the innovations specifically thought out and carried out on the stage of the Ariston Theatre in Sanremo.

Gaetano Castelli's set was immediately christened the “ark of music”. It consisted of a large “space ship” that dominated the stage with surprise effects as it moved and opened. The twenty metre long nine metre high scenic machine was so heavy (twenty tons) that preparatory reinforcement work was necessary on the structure of the Ariston Theatre. The “musical spaceship” took three months to put together and was entirely built in Rome. The work also involved the capital's TV Production Centre. It was then taken apart and reassembled piece by piece on the stage at Sanremo.

The concept behind the lighting design was flexibility. Lighting Director Ivan Pierri says: “I tried to get in tune with the radical transformations the scenic machine was capable of, by creating several levels of depth in my design. My aim was to surprise the viewer at home and be ready to meet the needs of the artist Adriano Celentano, who asked us to transform the Ariston into a different studio once he was on stage.”

The lion's share in the lighting design was taken by the Sharpys, used for the first time at Sanremo. These extraordinary Clay Paky compact moving heads, with their powerful ultra-concentrated beams of parallel light, are able to give every stage a distinctive identity.

In detail, 14 Sharpys were used inside the scenic “dome” together with 40 Sharpys placed on vertical trusses on the back wall of the theatre. The Sharpy beams characterized most of the artists' performances by creating “solid” columns of white or coloured light through which the performers on the stage moved almost as if they were stars on a rock concert stage. 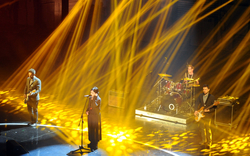 But the Sanremo festival was not just Sharpys: all the spotlights in this edition were Clay Paky lights. In detail, 30 Alpha Spot HPE 1500s were used on the stage, placed in the cuts in the side mirrors of the set, and 22 Alpha Spot HPE 1200s were also positioned on the inside of the scenic "dome".

On the subject of Clay Paky spotlights, Ivan Pierri says: “The features that spur me to use Clay Paky spotlights in most of the shows I am involved in are unquestionably power and reliability. Sharpys are simply amazing. When I choose a spotlight today I essentially look for the best power to weight ratio, and not so much for graphic effects, which can now be implemented with video projection or LED video screens. In this respect, Sharpys are ideal and irreplaceable.”

There are of course days and days of preparation at all levels behind such an impressive achievement, as well as coordination among the many artistic and organizational components that contribute to putting on an event. However not everything went smoothly right from the beginning. 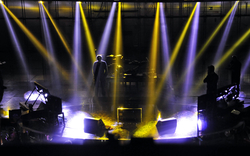 Ivan Pierri tells us that “my first instinctive reaction when I saw the set design was... to run away! Having the ceiling of the theatre completely closed by the set, as well as 3/4 of the side walls, put me in serious trouble. The installation of the lights was very complicated, and delays built up. It seems almost ridiculous now to say that some of the lighting sequences at the festival were programmed during the advertising breaks, but those who lived through the experience will not forget them easily.

Only the experience built up in previous years, the great reliability of the lights used, and the extraordinary quality of the console operators – Quintino Caci, Ettore Amadoro on coloured lights, Roberto Corona on white lights, Maurizio Ranaldi and Fabio Roberti on the Catalyst media server – allowed me to come up with a result that I think was of great quality, and I hope was enjoyed at home too.”