The tour is using 12 K10 and 36 K5 fixtures as part of its “big, powerful rock ‘n roll rig,” says Lighting Designer Justin Kitchenman of Fadeup Design Group.  He was introduced to the A.LEDA Series at LDI 2012 where he was “looking for the next generation moving light.”  After seeing the A.LEDA fixtures, “We feel we found the best the industry has to offer,” he says.

The A.LEDA Series is the first professional Clay Paky product line to use LEDs as light sources.  An alternative to discharge lamp wash lights, it offers all the benefits of LED technology: low energy consumption, long light-source life, small size, light weight and a robust build.  The K10 is the mid-range model in the Series and the K5 the smallest.  Both are fitted with multicolor RGBW LEDs that produce a full range of vivid colors as well as excellent shades of white.  Each color of each LED may be controlled separately to produce an endless range of color variations and to use each LED of the array as a pixel to draw graphic images that change dynamically in shape and color.  The lights come with a library of customizable pre-programmed graphic effects. A.Leda Wash K10 is also equipped with a motorized and fully-controllable 14º-70º beam angle.

Kitchenman is deploying the K10s as floor fixtures on the corners of the thrust as well as around the center of the thrust, which serves as Bryan’s B stage.  “The K10s work as a fantastic floor wash fixture,” he says.  “When zoomed all the way out they provide great coverage, but they are also soft enough that it doesn’t hurt to have them shining directly in your eyes.  This is important since the thrust is surrounded by the audience and the K10s are essentially at audience head height.  They give us the ability to cross- wash the stage without blinding the people closest to the action.” 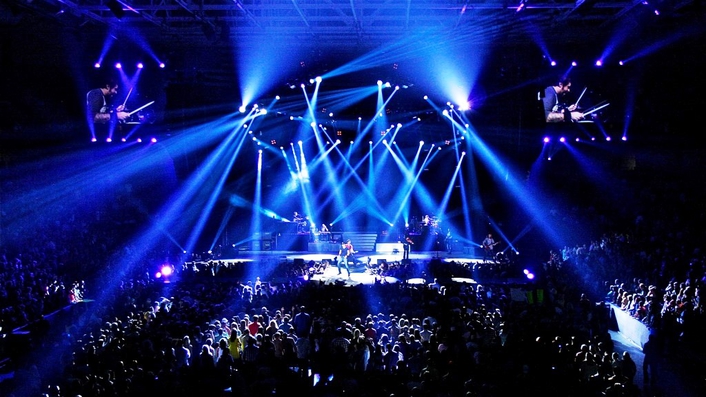 He also uses the fixtures in a narrow zoom to create powerful aerial beam patterns.  “With their positions out in front of the stage it almost appears that beams are coming out of the crowd,” he notes.

The K5s occupy two positions.  Four groups of four fixtures are mounted above the stage as part of the main lighting rig.  “Their purpose is pretty basic: They act as fast-moving ACL-type beams.  This placement also gives me another option to wash specific band positions during the show,” Kitchenman explains.

The second location is surrounding the side-hung IMAG screens.  “We wanted to have the ability to expand our lighting looks as widely as possible.  We were able to achieve this by modifying an already existing, but usually pretty bland, element of the show,” he points out.  Kitchenman is flying two 24-foot long sections of 12-inch truss with the IMAG screens hung between them.  “By adding 10 K5s to each side – four on the top truss and six on the bottom – we now have an element that adds plenty of eye candy and tons of audience light, gives us the width we desired and looks great on camera.” 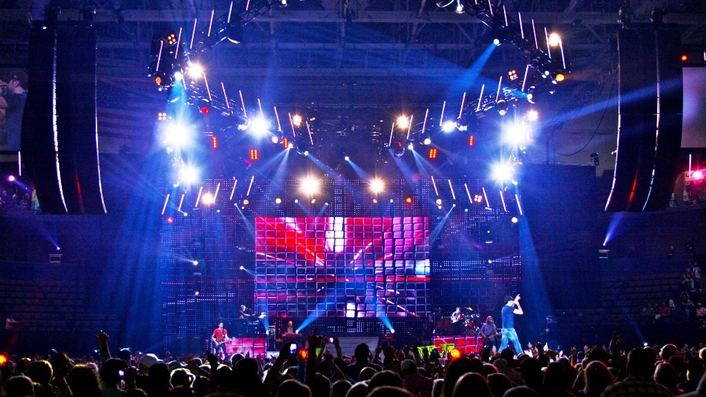 Kitchenman admits that one of his biggest concerns with any type of LED fixture is its source.  “I can't stand seeing the ‘gum-ball dish’ look where you can see all the RGB LEDs at the source,” he says.  “For the most part LEDs are faster, have nice beams and are energy and heat efficient – all of those things are a plus.  But as soon as I look at a monitor and see the source I want to shut them off.  It almost becomes a distraction at that point.  But the A.LEDA fixtures don't have that problem; they are a beautiful source.  If you are outputting amber the source is amber not red and green.”

Perhaps the most important factor in selecting the A.LEDAs was the ability to pixel map the fixtures’ cells.  “This allows us to not only use it as a moving light but also to incorporate it into the video content of the show,” he explains.   “To be honest, this feature is new to us, and we are still working it into the show.  But by having all the fixtures patched in extended mode we consider it a work in progress: As the show evolves we will be using the fixtures more and more to their fullest extent.”

Kitchenman is also a “big fan” of the fixtures’ color correction channel.  “It enables me to closely match my color temps with the rest of the lighting rig so my LEDs don't look so LEDish,” he says.

Tom Wilson, vice president of event productions at Elite, notes that Clay Paky’s new A.LEDA Series is viewed as an extension of the manufacturer’s offerings at “the high end of the business.  We’ve had some experience with the Sharpys over the last year and have been thrilled with them.  With Clay Paky it’s all about the quality of the build.  The equipment is fully engineered and ready to go out of the box.  We haven’t had any failures at all.  As a company owner that’s a huge thing to me.”

The A.LEDAs on the tour are controlled by grandMA2 consoles.  MDG the One digital fog/haze atmospheric generators and MDG Ice fog generators showcase A.LEDAs’ beams from the powerful lighting rig.

Francesco Romagnoli, Clay Paky Area Manager for North and Latin America, adds, “We’re very proud of the A.LEDA and pleased to have such a superior LED in the market.  It sounds like Justin is really getting the most our of them.”