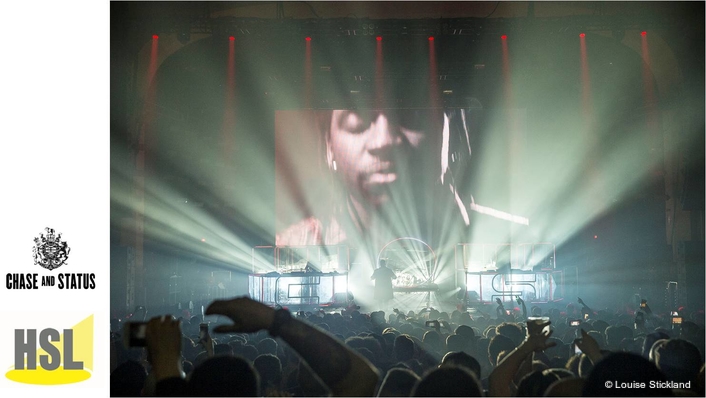 Popular UK DnB band Chase & Status played a high-profile sold-out show at London’s Brixton Academy - only their second live appearance in the UK this year after headlining the Lovebox Festival - for which show designer / director Andy Hurst created a high-energy collage of lighting, lasers, set and video to keep their enthusiastic fanbase stoked with visual treats!

Lighting equipment and crew was supplied by Blackburn based HSL whose association with the band goes back several years.
Andy took the base elements of this show from the design he’d originated for Lovebox which featured a massive specials package from HSL, which was re-scaled and re-worked to fit the Academy’s stage. 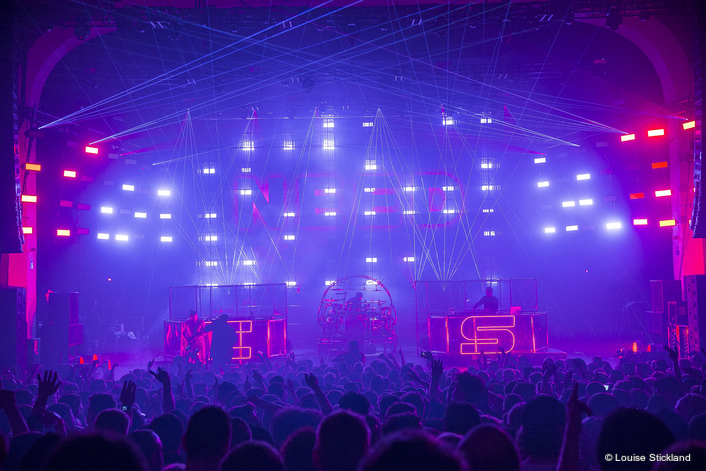 A key to delivering the full-on audio and visual onslaught that was needed to accompany the vibrancy and energy of the music … is to have multiple visual layers and aspects that can complement, contrast and be juxtaposed.
These can then be ‘played’ live and flowed with the rhythm and the action happening onstage, applying these visual elements in a highly musical way.
“It’s a great way to work” comments Andy who operates totally live, “You have to be 100 per cent into the music and have an understanding of the structure and narrative of each song”. 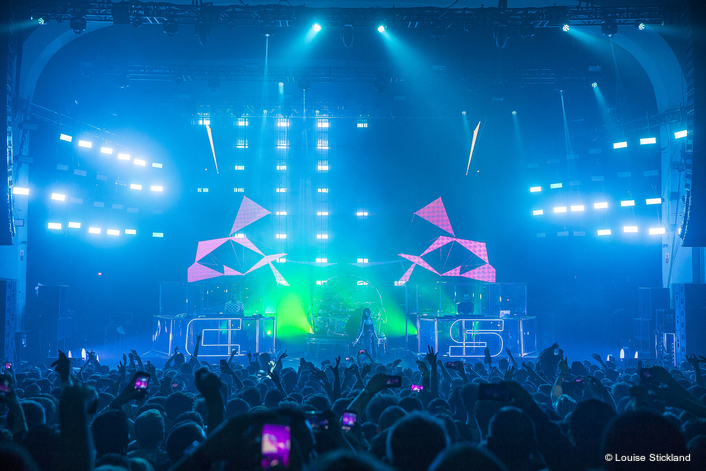 The aesthetics started with an 11 metre wide by 6 metre high 10 mm upstage video screen which was supplied by CT and was similar to the one used at Lovebox. Its transparency and the fact that it could be back-lit enabled Andy to pull it right to the front of the picture at times or completely disappear it at others.
This also facilitated new lighting treatments to be applied to some of the older guest vocalist videos - some have been appearing in C&S live shows for some time - which freshened them up and made them zing out with a holographic-like appearance. 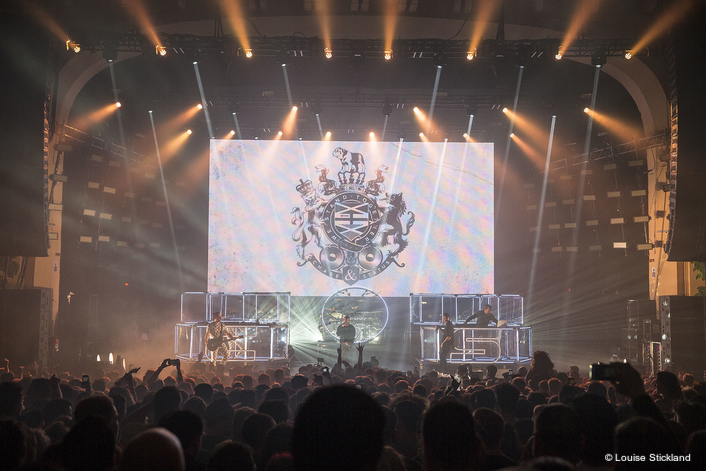 Andy has also designed a new custom set and risers for the band, seen for the first time in the UK at this gig. This was built by Light Initiative and comprises a series of Perspex panels with LED video strips outlining the edges, plus a curved LED ring around drummer Andy Gangadeen’s kit. The LED strips were mapped to the playback video running on the band’s AI server, creating plenty of funky kinetic effects. 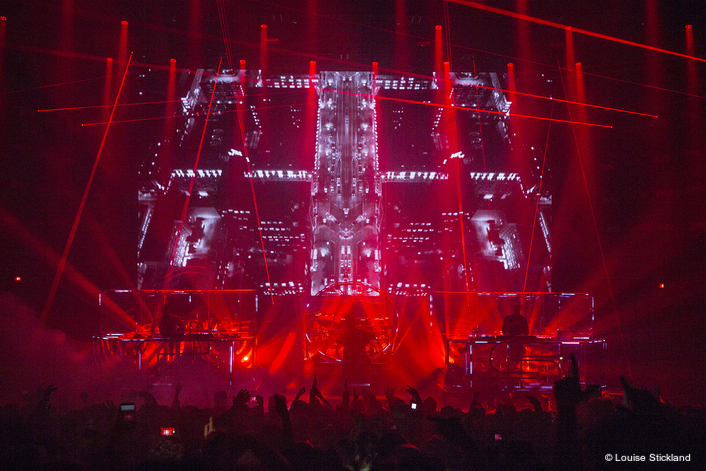 Robe BMFL Blade moving lights were positioned upstage of the set, so Andy (Hurst) could project gobos onto the Perspex set panels, which also looked highly effective and helped enhance the depth and perceived size of the performance space.
A dozen Robe LEDWash 1200s were positioned downstage left and right and used for powerful cross stage washes. The band - live sets also include the rambunctious MC Rage - are not fond of front lighting, they prefer to be caught in the more interesting shadows and crossfire of Andy’s ‘bigger picture’. 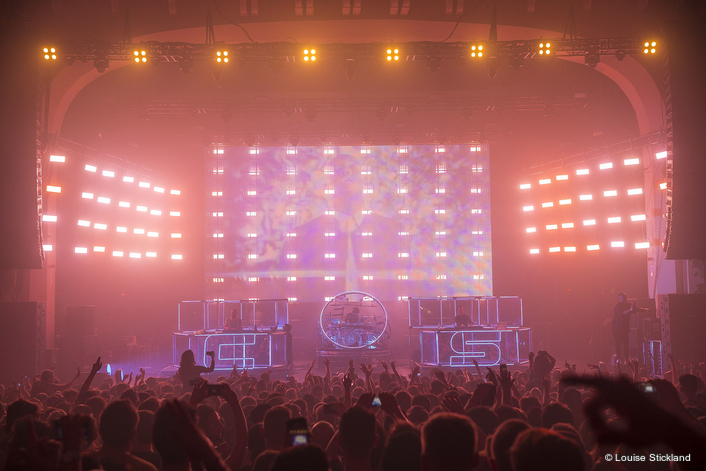 The major architectural look of the show was 137 x SGM Q-7 LED strobe / floods which produced some spectacular BIG looks, burn-out moments and chases together with an almost infinite variety of bumps and accents. The Q-7s were arranged on drop bars, 8 rows deep behind the screen and four rows deep to the sides. At Lovebox, this ‘wrap’ of lights had also been extended out to the PA wings.
The Q-7’s were also used highly effectively as floods, blasting energy out into the audience. 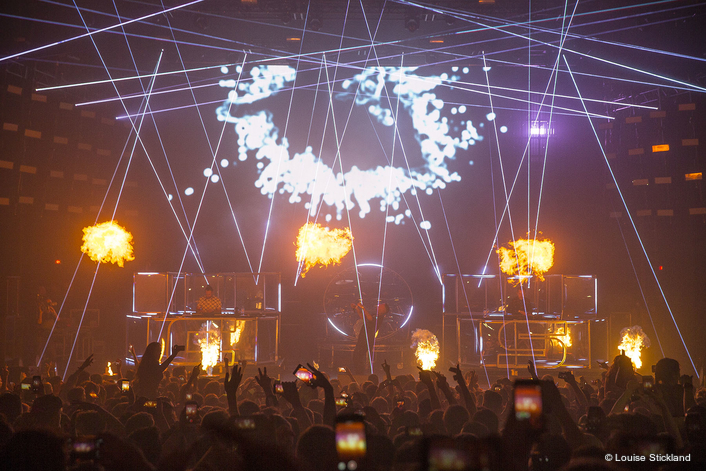 In the overhead rig, Robe LEDBeam 100s and Claypaky Sharpies dotted over the trusses were used for panning out into the crowds and sweeping the audience back up into the action.
The lighting picture was completed with three Robe DLX LED Spots on the front truss used for key lighting the three band members, and a selection of floor washes downstage which were lighting the MC and guest singers as they worked the forestage area. 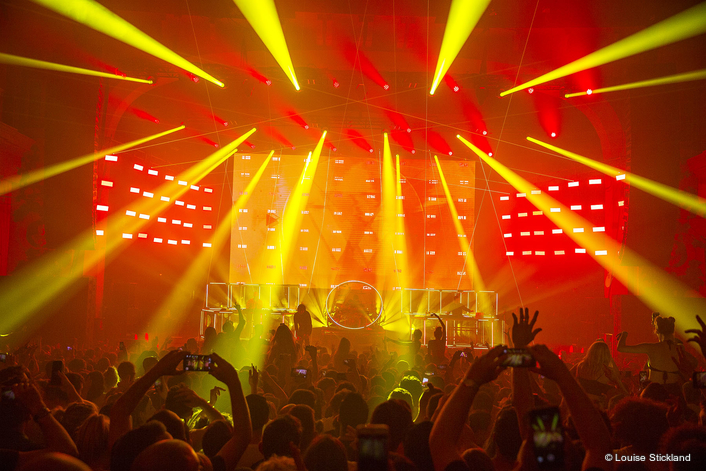 Andy is known for using lasers innovatively in his shows, and on this one he utilized 20 x Kinects - a small, light-weight modular laser system - from ER Productions which were deployed on the side trusses and the floor, and worked harmoniously with the lighting.
“Laser technology has moved on significantly in recent years as well as becoming highly cost effective” he stated, adding that he likes the different look and the quality of laser lighting generally. It’s something he can weave into lighting looks or use as a stand-alone effect as required, and he likes having the crispness and clarity of a laser lightsource in the mix.

The CO2 and flame effects – without which no self-respecting electronic or DnB set would be complete in 2017 – were used judiciously and were therefore highly effective.
Andy operated lighting and lasers from his own two Road Hog Full Boar consoles, with all the playback video run from onstage, and the flame and CO2 jet cues triggered by the SFX crew from BPM.

Andy praised his “fantastic HSL crew” who worked tirelessly to get everything up and running in time. They were crew chiefed by Matt Brown and included Keith Parrot, Joe Downling and Bobby Swerdlow. The project was managed for HSL in the office / warehouse by Jordon Hanson.
Chase & Status celebrate their 15th year throughout 2018 in what promises to be a hectic touring and live work schedule.