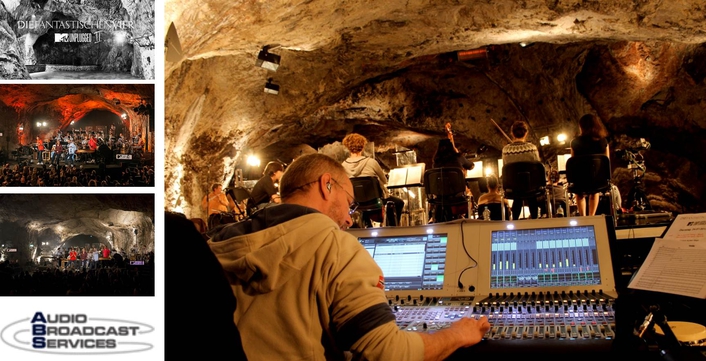 Fantastische Vier trust on rental partner ABS and Lawo technology for their unplugged concerts
When MTV asked the “Fantastische Vier” (“The Fantastic Four”, “Fanta 4”) if they were prepared to repeat their ingenious unplugged concert of the year 2000, the four artists decided for a remake with new songs at that same spectacular venue that twelve years ago had been such a unique atmosphere: the Balve Cave (German: Balver Höhle). With regard to audio technology, they were served by Audio Broadcast Services (ABS) – and Lawo audio mixing consoles provided excellent sound under very difficult acoustic conditions.

The location
The „Balve Cave“ outside Balve in central Germany is Europe’s largest cultural cave open to the public, with an entrance portal measuring 11 meters in height and is 18 meters wide. It was formed by penetrating water within millions of years. The huge hall, nearly 90 meters deep, offered space enough for the band plus orchestra and about 900 visitors.

The band
Since they achieved their first chart success in 1992 with German rap, the Fanta 4 keep playing a central role in German pop culture as they elevated the German rap scene that was just developing in those days, out of their niche and sensitized the public for the radiance of spoken words in interplay with rap and pop elements. With their eight studio albums, they extended their influence and success, diversified their own style and always found a new musical approach and new texts and topics.

It was the first German band that was invited by MTV to an unplugged concert – that first one in the Balve Cave – and at their twentieth birthday they treated themselves with an open air concert in front of 60,000 people in Stuttgart – also accompanied with a full orchestra.

The technology
At the „MTV Unplugged II“ and the follow-up gig with the same instrumentation at the Zurich Open Air, they were technically looked after by Audio Broadcast Services and project manager Matthias Paha, who was responsible for the Lawo technology and for the planning and configuration of the mixing console components. The other technology was supplied by Satis&Fy Werne with their project manager Robert Schwarz.

Kai Reinhardt (Monomama), responsible for monitor mix and the overall audio-technical conceptional design and planning, Klaus Scharff (EarCondition), responsible for the FOH mix and recording, as well as Stefan Holtz, responsible for the PA/acoustic design in the cave, were actively supported in planning and realisation with regard to Lawo equipment. Just as successful was the migration of previously used technology to Lawo mixing consoles for the production of the Fanta 4, and this within a very tight timeframe. “You can imagine what happens when 40 musicians insist upon their accustomed in-ear sound within a short time span when using technology they had never used before! This requires every hand to manage this within the time window and at the top quality needed for the production”, says Kai Reinhardt. For using the Lawo mc²56, Klaus Scharff could draw from his experience in using this console for the production of “Deutschland sucht den Superstar” (German casting show derived from the British “Pop Idol”) and thus could fully concentrate on the FOH sound and the recordings.

The Lawo mc²56 utilised as FOH for the Fanta 4 supplied 240 DSP channels and was fitted with 48 faders, the second mc²56 for the monitor mix offered equally many DSP channels. The latter console was especially configured for 96 Aux channels (48 x stereo in-ear monitoring) and extended with a 16-fader extender to guarantee direct access to as many channels as possible. “Only when the monitor mix and the sound are good enough so that the musician no longer has to reflect on it can he fully concentrate on the music and perform at his best. To do this for 40 people individually within the shortest possible time requires from the monitor engineer enormous experience and knowhow as well as a fast and intuitively operable technology”, explains Matthias Paha.

The audio- and control signals were transferred via optical fibre; both mc²56 consoles were networked via 128 tie-lines. 112 microphones on stage were connected to the DALLIS I/O systems, in all 126 microphones were in use at a time. The concert was recorded on two 128 multi-track recording machines, the audio outputs were supplied to the PA and to the 16-camera TVN OB truck. “By smart distribution, Kai could accommodate all inputs within two layers with all aux sums in direct access via the central control section. Another benefit was that we could isolate individual sections of the console so that we could work with two-man operation. During the sound check and the rehearsals, the 40 musicians wanted their personal in-ear mix changed – all at the same time. Fortunately, the Lawo console was perfectly capable for this application. During the sound check, I could also supply signals to the OB truck, monitor the recording and switch the tie-lines to and from the FOH without disturbing the work at the monitor in the least”, remarks Paha.

The difficult sound engineering of the Balve Cave was designed by Stefan Holtz and realised by Satis&Fy Werne.,. To be prepared for any contingencies in previous concerts, the Fanta 4’s technical engineers have been always anxious to have ProTools systems at hand which have been traditionally used by the Fanta 4 concerts as dynamic processing units. But this time, because of the highly praised mc²56 sound they were only used as reverbs. “The preamps of the Lawo system offer such a high resolution and precision that you practically don’t have to adjust anything. In addition, the signal processing is of such high quality that external inserts often bring no benefits but solely cause latencies. Alone the 6-band EQ is great fun – in performing technically very precisely – never sound just technical but musically and pleasantly. The compressors don’t pump but work the way you expect from such tools – without disturbing side effects and sound fragments. Nevertheless we had linked up ProTools via MADI – one at the FOH and one at the Monitor – so that Kai and Klaus had the possibility to use EQ and compressor plug-ins as insert. Eventually, no external ProTools effects were used at the monitor place, and Klaus at the FOH used only a very special dynamic plug-in,“ closes Paha. 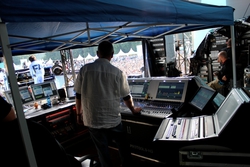 After the concert in the Balve Cave, Satis&Fy kept the mc²56 and adapted the show and configuration for an open air concert in Zurich in front of more than 20,000 visitors by using the 128-track recordings of the cave. With this coherent systematic it was possible to adapt the “cave sound” for being a “festival sound” with the least possible effort at very extreme time constraints. Thus, there was no need for additional rehearsals with the 40-person orchestra, all was reduced to a short sound check on site. “Economically, this is an enormous benefit; just think of the financial effort for rehearsals of such magnitude! You just pre-mix the show for every one individually with the 1:1 recording for the festival and it simply matches – that has never happened before; you had always deviations, but not this time with the Lawo system, thank you for that!”, says Kai Reinhardt.