Calamari & Robe Diet for Feed Me 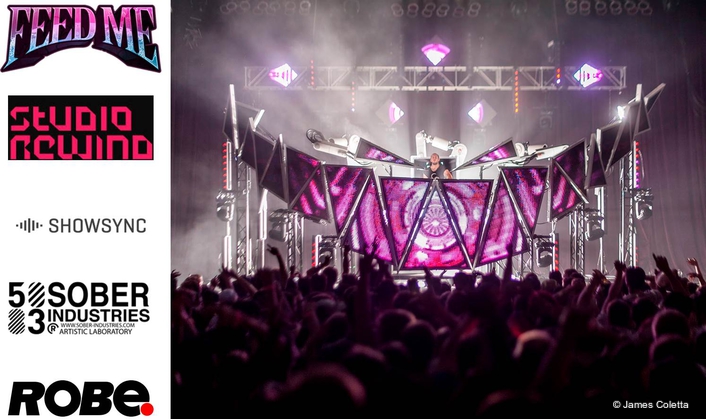 .
London based LD Rowan Norris of Darkside Lights has been working with Feed Me, one of the intriguing aliases of highly talented DJ Jonathan Gooch - the artist whose individual sound flips between dubstep, electro-house and a bit of d’n’b have earned both critical acclaim and a serious fanbase.

Rowan joined the Feed Me team as an operator back in 2012. Initially brought onboard to operate the house rigs over the top of the synchronised shows, Rowan was delighted to be asked to submit a design for ‘With Teeth Version 3 upgrade’, for which he specified Robe Pointes and CycFX 8s.

“The completely bespoke new set was inspired by Chris Cunningham’s ‘All is Full of Love’ for Bjork, so we needed fixtures that could be fed with video animation… and could also move,” explains Rowan.

The show’s overall visual design was originated by the artist and crafted for the stage by Netherlands based Creative Director Auke Kruithof of animation/VFX company Studio Rewind in collaboration with art collective Sober Industries.

The centrepiece comprised of 25 custom video panels making up the ‘teeth’ of the devilish, onerous grin of the Feed Me character. These were then brought to life by tailor-made animations, individually mapped to the teeth and eyes.

To light the show, Rowan sought out a small and dynamic fixture, and Robe’s Pointe fitted the brief perfectly. There were limited places in the set where lights could be rigged, but with multi-functionality in the fore, “The Pointes could effectively be four lights in one and were an obvious choice!” he stated.

In total twelve Pointes were specified. Six were positioned on the back truss, and six were ensconced in the set. 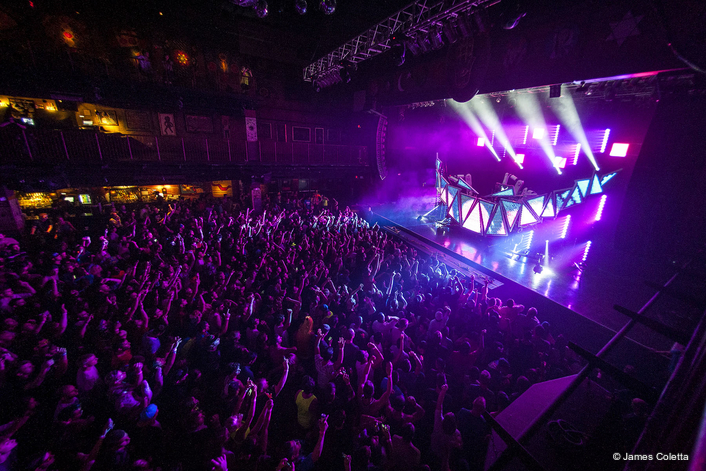 “They gave a massive output for just twelve fixtures, and with such a compact body and light weight,” he commented.

Rowan first saw Pointes in action in a club in London, after which he contacted Ashley Lewis from Robe UK to arrange a demo.

He was stunned at the speed and the sheer range of features, both of which were key to his Feed Me show, where all the lighting changes happen in nanoseconds of darkness during the numerous drops, so with the range of looks created it looked like a massive lighting rig rather than the same twelve Pointes!

“I could hardly believe we could create so many different looks with the same fixtures!” he declared. But that is exactly what they did.

For the US section of the tour, the Pointes were supplied by VER.

They also used twenty CycFX 8s, which were pixel-mapped and run with video sources controlling the colour and intensity. “Everyone we came across on the tour was completely blown away by the CycFXs,” he added.

The CycFX units were rigged on floor-mounting poles and used to continue the video wall ‘face’ idea, with the back truss effectively becoming the forehead.

For control, light and video designs were all synched to the music with Light Sync and Video Sync - custom-made plug-ins designed for use in conjunction with Ableton’s dynamic Max for Live platform.

Twenty-five lighting designs were developed in collaboration with Studio Rewind for the tour, all programmed using Ableton Live software by Mattijs Kneppers, the founder of Amsterdam based ShowSync, who developed the specific tools needed as they worked on compiling the show.

“It was a great way to programme as it allows you to go into incredible detail,” recalled Rowan, “You are literally executing thousands of lighting cues per song, and both lighting and video designs were being developed simultaneously in the Studio Rewind office, which enabled us to be really dynamic. We could literally chop out parts of either video or lighting cues to make space for other bits!” 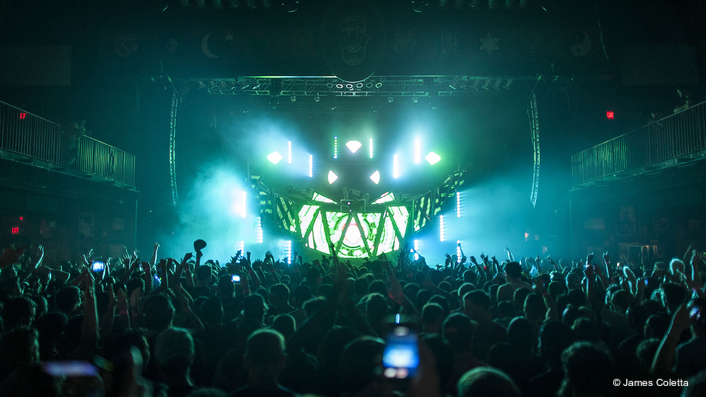 Through this process, they also learned to, “embrace the black”.

Once programmed, the look and feel for the musical numbers was pre-set, although there are options for some degree of live intervention ‘over the top’ from gig to gig, however this was limited. It meant that everyone in the pool of people involved - including the artist - had to be united and confident about what they wanted to see by the end of the production rehearsal.

Rowan has been using Robe products since he cut his teeth as a lighting professional at the iconic - and sadly missed - Astoria venue in central London. He has now added Pointes and CycFx 8s to his list of ‘go to’ fixtures, together with the LEDWash 600, when starting a tour design or specification.