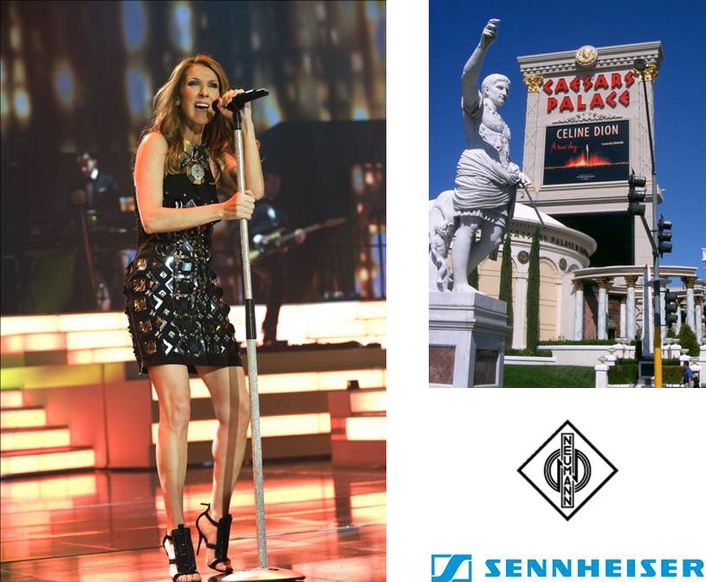 International Superstar Returns to Las Vegas: Neumann and Sennheiser are Chosen to Reproduce Vocals and Instruments
Global superstar Céline Dion’s recent return to The Colosseum at Caesar’s Palace Las Vegas has once again been a resounding success, marked by sold-out shows and rave reviews. Her previous headliner show at Caesar’s ran from 2003-2007 and was attended by over 3 million fans.

This time around, Céline – who performs with 31 musicians including a full orchestra and backup band – personally selected the Neumann KK 104 S cardioid capsule coupled with a Sennheiser SKM 5200 II handheld transmitter to deliver her legendary vocals. In addition, a full array of Sennheiser and Neumann microphones are used to capture the complex performance, which is produced by AEG/Live Concerts West and directed by Ken Ehrlich, renowned for his work on the Grammy Awards.

Céline is appreciated by her audio staff for her amazing ear and sense of sound, as well as her strong capability in participating in technical decisions. Before launching the show, she spent a full day reviewing gear and testing microphones with Denis Savage, her sound designer and FOH engineer; François “Frankie” Desjardins, her system designer; Charles Ethier, her monitor engineer; and Marc Thériault, her RF engineer.

A Win for the Neumann KMS 104 S
“We were using the A-B-C-D testing methodology,” explained Desjardins, who has been working with Céline for 18 years, “and it always came back to the Neumann head. At the end of the day, Céline was convinced she had the best microphone in her hand – a Sennheiser SMK 5200 II transmitter outfitted with the Neumann KK 104 capsule.”

In addition to featuring over 31 musicians on stage, Céline’s show also includes a spectacular light and video display as a backdrop. As she performs, moving stage pieces, video and lighting enhance the theme of each song. Still, there is an intimacy to the show that highlights Céline’s stunning unique voice. The KK 104 S accurately captures every nuance and detail throughout each performance. 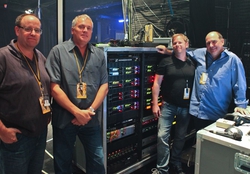 For Céline, performances all come down to emotion and self-expression. “I think she loves the KK 104 S because it allows her to express herself best,” commented Desjardins. “She creates this natural compression with the mic and her voice by pulling away when she pushes more, in order to keep the same dynamic.“

Desjardins said that the KK 104 S is remarkably consistent in its sound, regardless of how the mic is positioned to the singer: “When she sings off-axis, the sound is almost identical to the on-axis sound except that it is of course lower in intensity,” he explained. “A lot of other mics would change tone, and possibly lose all the details when they reach 25 degrees off-axis. The KK 104 S can handle this – it’s one of its greatest characteristics.”

A Collaborative Relationship
Sennheiser was involved from the outset in helping Céline’s audio staff allocate a wide range of possible microphones for the show. “We have a great relationship with Sennheiser, and they have always been right behind us on everything,” said Desjardins. “For this show they made every effort to source equipment for us – not only microphones, but wireless equipment. This really helped us identify our needs.”

“Sennheiser is pleased to have played a significant role in Céline’s most recent performances at the Colosseum at Caesar’s Palace Las Vegas,” commented Jean Langlais, president of Sennheiser Canada. “Céline is a very discriminating artist who is intimately aware of every aspect of her performances – especially the sound. It is clear that this has been a success not only from the perspective of Céline and the technical teams involved, but also the 250,000 fans who have already attended the show.”

Drummer Dominique Messier was very involved in researching which microphones sounded best on drums, recording everything on multi-tracks and playing it back in order to determine what worked best. He ultimately chose Sennheiser e 902s for the toms; a Neumann KM 150 for the high-hat; a Neumann KM 184 and Sennheiser MKH 800 TWIN on overheads. “He also put a Neumann TLM 102 on the vintage kick drum we’re using,” explained Desjardins, “and it not only delivers the right sound, but also compliments the look.”