.
Euro Media France (EMF) is a full service company, leader in TV facilities and solutions for media and broadcast organisations. Offering the largest range of studios facilities (70 sets) and mobile video units in France (27 including 22 in HD), EMF has developed innovative and flexible services by mastering every stage of the production cycle, from pre-production to broadcasting solutions. EMF also provides additional and specialised high-tech services such as New media, RF, super slow-motion, graphics, 3D, content management, playout, engineering and integration. EMF is acknowledged for its expertise in the fields of sports, live or recorded shows as well as variety, games or entertainment shows.

Created in 1993 by Gildas Le Roux, la compagnie des Indes asked us to do the filming and broadcasting for the comedy “Les Menteurs” [The Liars].

From Euro Media France’s OB truck L4, Emmanuel Carriau relied on 7 cameras to showcase Anthony Neilson’s stage direction. All of the sound recording was performed by the truck’s engineer, who replaced the theatre’s microphones with EMF’s own.

The play was widely watched with 205,000 viewers tuning in, which is the record for this season for Paris Première.

We would like to mention the operations office for the 10th arrondissement’s police department, as well as the RATP for giving us permission to park the OB trucks and the satellite station in the bus lane: thank you!

Saint Petersburg in Paris
EMF has provided services for 3 lively shows from Telmondis! Buoyant from the success of the Coldplay concert filming by the United teams, EMF accessorised "Fiction" cameras (Alexa/Arri) available to hire from Transpacam , for the live filming of Swan Lake in Monaco. A custom made control room was also specially installed in the Salle Pleyel to broadcast the concert of Chostakovitch’s works , live on Mezzo Live and Radio France. EMF’s cameras were also installed in the tent for the Phenix circus, which was pitched on the Pelouse de Reuilly. 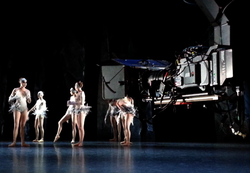 Telmondis and Euro Media France implemented a substantial amount of equipment in order to fully showcase the skills of Valeri Guerguiev from the Marinsky Theatre in Saint Petersburg.

The filming of the concert was entrusted to Don Kent who had 13 HD cameras (3 studio cameras, 5 light cameras, 3 portable on stage cameras, 1 Litecam from Microfilms and 1 BIS camera for the journalist who was presenting live. EMF also managed the 13 HDCAM video recorders which were recording the programme in PGM, and the different camera angles.

On 7th January the concerts were broadcast live on Mezzo Live HD and citedelamusiquelive.tv, and on the 8th they were recorded for broadcast at a later date on Mezzo. The sound recording was done by Radio France, who broadcast it live on its station.

The E-box is put to the test in the casualty department!
After its noteworthy beginnings with Baby Boom, the E-box (mobile control room and hub installed in 2 Algecos) worked on Star Academy, Hotel GB (in London) and made its big comeback to the hospital environment yesterday spending 24 hours in a casualty department.

Broadcast in the second part of the evening on TF1, the show produced by Press & Co, subsidiary of Shine France, is an adaptation of the British show “24 Hours in A&E” – services provided by the CTV teams in the UK(subsidiary of the Euro Media Group). 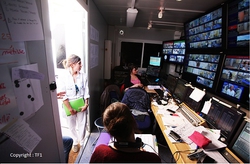 This 6 episode documentary series gives the viewer a fly-on-the-wall view of the daily lives of doctors in the casualty department.

Filmed during the spring of 2012 in the Montpellier CHU [University hospital], the show benefitted from the various technical features of the E-box (conceived and created by Euro Media France). Filming in the A&E department took place over two weeks for 24 hours a day, 7 days a week, during the whole period.

The teams also helped with the image management from the ENG cameras since the images were filmed from the moment the SMUR were called (telephone call to the casualty department) up until surgery took place.

Several mobile teams also followed the external emergency call outs – either by helicopter or by ambulance.

Use of 10 HD Flux with multi resolution meant that long and costly transcoding stages in post-production were avoided.

Archiving and content management were completely dematerialised (Media Asset Management) to pick up more than 240 hours of rushes everyday, which were of an un rivalled quality for this type of service.

EMF is singing again!
The Voice returns to the Studios du Lendit with its second season, which will start on 2nd February on TF1.

The 4 red arm chairs and the giant hand were reinstalled on set L1 (1,300m²) for Shine France. Set L2 (200m²) was used for the interviews on the show. Produced by Tristan Carné (Danse avec les stars, and the Téléthon), OB truck XL1 was used for the auditions recorded in November 2012, and the ‘battles’ filmed in January. 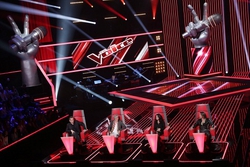 Euro Media France provided 15 cameras including 1 RF Steadicam carried by Mathieu Caudroy. The lighting was provided by Fred Dorieux’ team whereas SILENCE took care of the sound. The 4 coaches, Jenifer, Florent Pagny, Garou and Louis Bertignac, are once again taking part in the adventure as well as the presenters Nikos Aliagas and Karine Ferri.

Backstage, Salomé and Louise (ex-contestant from Season 1), have swapped their singing costumes for those of a V-Reporter. Same rules for the auditions as last year: judging of the vocal talents is done ‘blind’- so only the voice matters, and nothing else!!

It is still worth noting, however, that there will be some changes compared to last season, for example after each ‘battle’ the 4 coaches can save a contestant from elimination and take them on to their team. This will be shown during prime time in April! 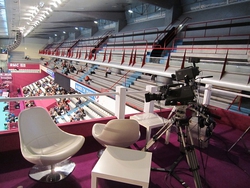 Tennis: always a decisive game
EMF was joining Eurosport in Coubertin for the ‘Gaz de France’ Open on the 29th January to 3rd February.

Equipped with 7 cameras including 1 loupe, OB truck XL4 will produce the international signal for the tournament. The images filmed by our teams will be broadcast on screens throughout the stadium (press and organisational areas, the VIP village etc.). Our technicians also installed a stage in the tiered seating area in order to host journalists and guests during the tournament. Finally, on Tuesday evening, EMF added an ENG and an HF to the 7 cameras to film all of the "Mauresmo evening.