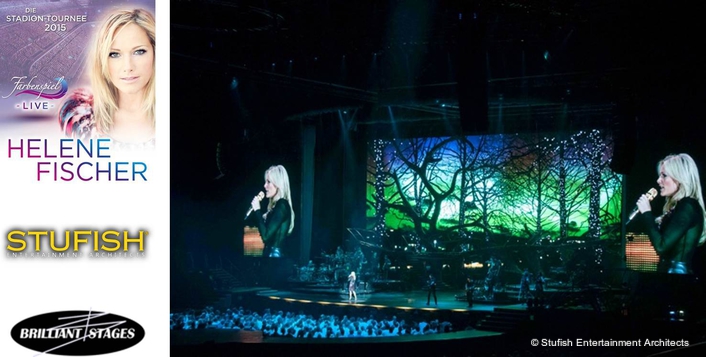 Fabrication of the 22m wide x 12.5m deep x 2.1m high main ‘A’ stage took place at Brilliant Stages’ site in Hitchin. The stage surface incorporated two 5m long travellators, a star trap and rear access steps, with the whole structure built on a rolling aluminium frame for easy deployment. The below-stage area was constructed with a series of passageways that linked three main dressing areas and gave crew- and artist-access to the star trap, crew travellators and a passerelle leading to the ‘B’ stage. Two rolling low-level tech risers flanked stage left and right positions.

Atop the main stage Brilliant Stages added two raised screamers, complete with handrails, and two sets of ‘lily pad’ risers – a series of overlapping, circular band risers constructed from 23 sections of staging and supported by aluminium frames. Safety rails were added to the rear upper risers to safeguard the performers while the decks and fascias were finished with a painted gold trim.

A curved walkway, reached by a pair of access steps from the main stage, lead to a circular ‘B’ stage with integral lift and revolve. The ‘B’ stage was largely developed and designed by Brilliant’s John Prentice from an original concept by the late Andy Edwards. Prentice then worked with Brilliant workshop manager, Luke Johnson, and Tony Ravenhill to complete the build and testing stages. 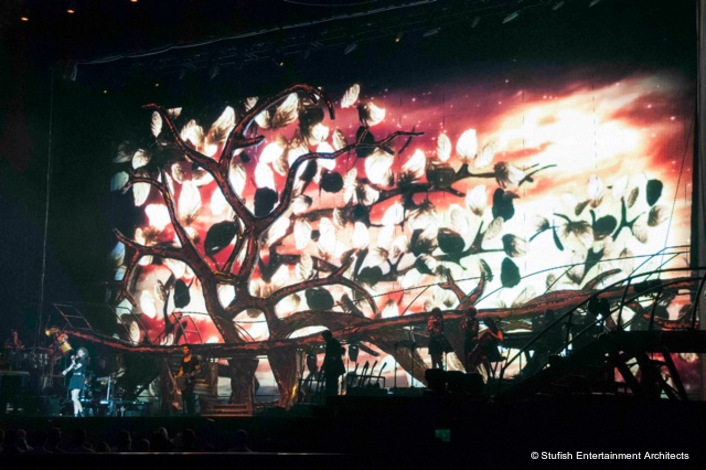 Beneath the stage right walkway Brilliant Stages constructed a low-level passerelle track with a rolling carriage that secretly carried the artist from the ‘A’ stage to the ‘B’ stage out of audience view. From here the ‘B’ stage’s central lift raised the artist upward onstage into a 2.2m lotus flower formed of six closed petals which opened out to reveal her to the audience.

The petals were constructed out of PETG provided by Peter Evans Studio and artistically treated by Jacqui Pyle. These were carried on by dancers and set into a circular bracket on the ‘B’ stage in a closed position. A hinging mechanism, devised by Tony Bowern and John Prentice, opened the petals as the lift raised the artist to stage height and, supported by raised ‘B’ stage decks, rotated the flower 360° anticlockwise as the stage lift continued to raise Fischer higher above the stage and rotate her in a clockwise direction. 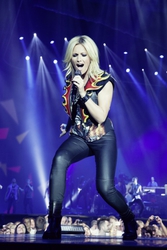 A dominant feature of the set was the backdrop of a three-dimensional flown tree which Brilliant Stages fabricated to include LED strips along its branches. These were used to adjust the tree’s colourtone and appearance throughout the ‘seasons’ in accordance with the show’s theme. The tree was constructed in 35 individual pieces, each of which was created and treated with individually shaped mesh and finished with a gold resin to create a bark-like effect. Brackets were also included along the branches for the addition of flowers and leaves that were attached during the interval with magnetic pads. “The realisation of the tree with the hidden LED chains in it and the golden mesh on it was a wonderful and unique creation which has been admired by audience and experts alike,” says tour production manager, Thomas Schmitt.

Beneath the tree a ‘tree riser’, designed and fabricated by Brilliant Stages with fabrication support from Litestructures, spanned the upstage edge of the ‘A’ stage. This was designed with minimal visible support so as not to distract the audience’s focus from the tree and formed using a bespoke truss platform sited on aluminium supports that connected into the rolling stage below. Artworked fascia with integrated LED lighting that matched the tree were added to the supporting legs and front edge and the whole piece finished with a handrail and spiral access steps.

The artistic finishes for the lotus petals, tree finish, flowers, leaves and fascia were created using a technique devised by Jacqui Pyle as an artistic exploration which followed a detailed creative brief from Ric Lipson and Ray Winkler from Stufish.

Brilliant Stages also delivered a close down drape and Austrian drape with a fabric solution supplied by JC Joels, both of which were tested at the LS Live site in Wakefield prior to delivery. 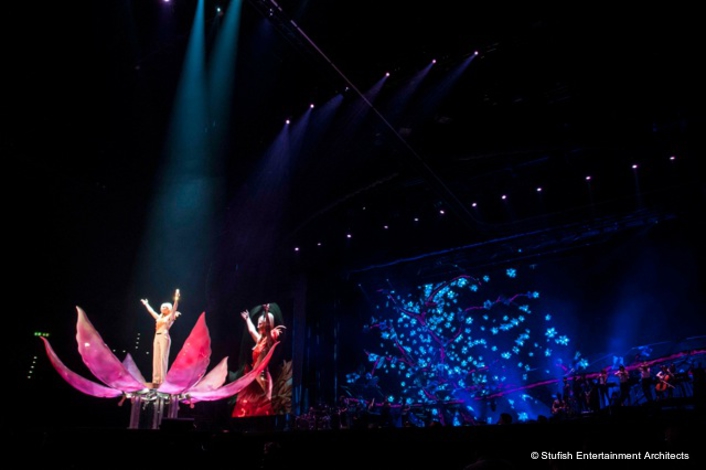 “The Farbenspiel Tour stage was a complex project,” says Welch. “We had to fit everything around the show design and factor in the route of a large flying bird which needed clear passage downstage between all the staging elements. This necessitated good communication between all departments which, luckily, is something we have plenty of experience in.”

“Working with Brilliant Stages was a very pleasing experience,” says Schmitt. “Not only is everybody very friendly, but they are extremely focused on the project and experienced in their field - there is a specialist at Brilliant Stages on any subject! During my frequent visits to Hitchin I really felt at home there.

“Ray Winkler and Ric Lipson of Stufish did a brilliant job in preparing and moderating these meetings and in exploiting Brilliant's full potential. The team spent much time on various test runs and demonstrations and we had the opportunity for very target-oriented discussions on any detailed solution. Brilliant Stages then engineered it exactly as discussed and was very helpful in fine-tuning the details on tour.” 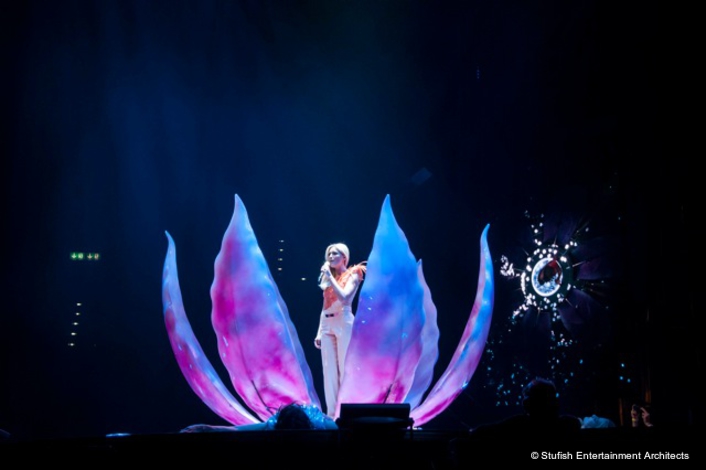 To ensure the smooth running of the load-ins and breakdowns, Brilliant Stages supplied two stage set carpenters to travel with the tour, with Tony Ravenhill taking care of the mechanical elements and Jason Welch handling the stage set.

“We are very happy with the way the project came together,” says Brilliant Stages Managing Director and Project Manager on the project, Tony Bowern. “Not many organisations have our level of resources to draw on to enable them to turn such a detailed job around so quickly. Our Planning Manager, Lucy Coe, worked really hard to project manage the task with great skill and efficiency. To be able to deliver such a complex set to such a high standard in the short turnaround time (11 weeks) is very satisfying.”

Helene Fischer’s Farbenspiel show will be adapted for a stadium tour starting in May 2015.

About Brilliant Stages
Brilliant Stages Ltd. is the world leader in specialist stage set fabrication and employ impressive, up-to-date facilities and skilled staff to ensure customers’ highest expectations are met. From corporate presentations, internationally-renowned stage shows and broadcast events to major worldwide rock tours- Brilliant Stages system techniques and expertise have been at the core of some of the biggest touring shows every produced.  Working with the world’s leading designers, our in –house project management  team turns into dreams into reality.