BMFLs Impact for Final War of The Worlds Tour 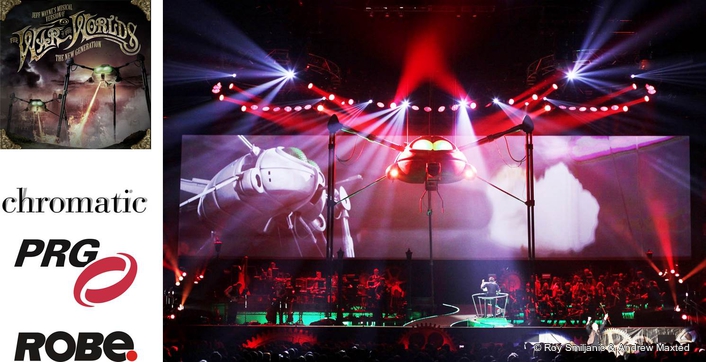 .
The lighting design for the final arena tour of Jeff Wayne’s Musical Version of The War of the Worlds – The New Generation was created by Tim Routledge, in the process adding his own distinctive stamp to the stage adaptation of H.G. Wells’ 1898 classic sci-fi masterpiece … with a little help from Robe’s new BMFL Spot fixtures.

When Tim took over lighting the epic live show in 2010, it underwent a complete redesign. The production toured again in 2012 before this final run, where he again reworked the lighting, this time due to swapping out several older fixtures for newer technology that had come onto the market in the last two years.

He retained all the classic looks and styling that had helped make WOTW such a visual tour-de-force, whilst new elements – not previously possible – were added to help ramp up the drama for this landmark finale.

The six BMFLs replaced other large fixtures on the previous tour and were chosen for their brightness and multi-functionality, which was perfect for producing the desired effects. They were used for a series of signature looks throughout the show, and also for blasting out into the audience and drawing them into the epic battle between earth and Martians.

Four BMFLs were positioned on the front truss and the other two on circular trusses, one above the band and one above the orchestra. The lights alternated with the stage action as the band and the electronic instruments represented the chaotic alien culture of Mars, while the orchestra, with violins and strings, the more familiar tranquility of earth.

"I needed lights with a huge range of possibilities", states Tim, adding that even with a myriad of other lighting full-on onstage … the BMFLs are so super versatile that they cut through everything, and six units were really all he needed for the job in hand!

The BMFLs were also utilized – in a big iris effect - a dramatic special effect accompanying ‘Ulla’ sound -  the deep, menacing vibrating horn-like drone of the Martians’ call to war.

Tim made another major upgrade to the rig in swapping out all the previous spot moving heads for 16 x Robe Pointes … which he wanted for their versatility and because they could produce so many different looks. 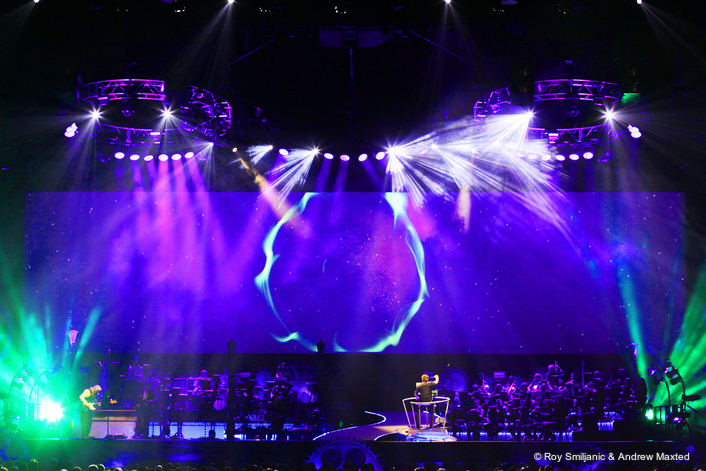 Several thousand timecoded lighting cues later – many of them multi-layered and incredibly detailed - Tim reckons he had explored just about all of the vast range of effects and combinations offered by the Pointes. They were used extensively and appeared in pretty much every scene!

Their small size was a great advantage in keeping out of the beam path of the 80 ft wide projections which were absolutely fundamental to the narrative.

Tim and Tom Young, his Lighting Design Assistant and Programmer, re-programmed the show incorporating all the new fixtures and cues onto a grandMA2 light console, spending 7 days of WYSIWYG’ing, followed by technical / production rehearsals at LH2 in London. It was an incredibly busy show for lighting and getting this part of the process spot-on was intense.

Lighting was operated on the road by Tom.

The lighting contractor was PRG and the Production Director was Steve Nolan of Chromatic Productions. 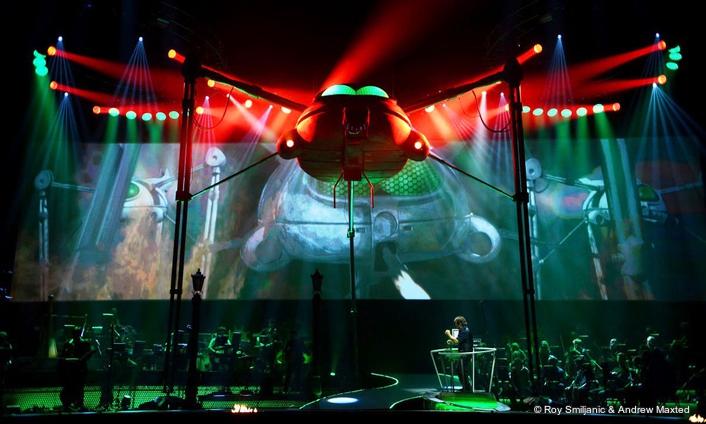 Tim was the world’s first LD to use the BMFLs on a live show … during the Opening Ceremony of the 2014 Glasgow Commonwealth Games and ahead of the product’s official launch in September.

XL Supplies Final Arena T... of The War of The Worlds
RG Jones and MLA Wins The War of the Worlds
Red TX Records The Audio ...ation – Alive On Stage!

The War of the Worlds
Chromatic
PRG
Robe