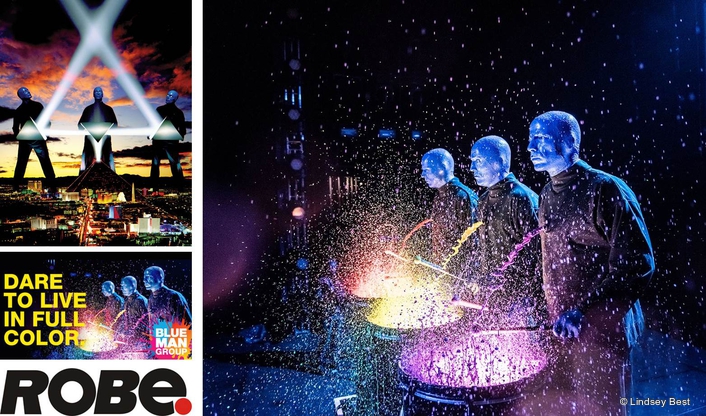 Blue Man Group is a heady mega-mix of music, technology, art and excitement which immerses and delights audiences by wrapping them in its infectious beats and vibes. Lighting plays a crucial role with a dynamic and energetic maelstrom of color, movement and emotion.

When Blue Man Group’s Las Vegas show moved back to the Luxor at the end of 2015, it was an ideal opportunity to upgrade and change certain aspects of the lighting rig to optimize the more intimate venue.

The space ideally lent itself to more compact fixtures to fulfill Tony award-winning lighting designer Kevin Adams’ visual concept, which had been developed in 2013 when the Blue Men had moved a new show into the Monte Carlo Hotel.

“I wanted fixtures that were very specific and would work well within the space limitations but that also had the brightness and impact to hold their own alongside the video elements,” explained Tabitha Rodman, Blue Man Group’s associate lighting designer.

The back wall, the set legs plus other scenic features are all constructed from LED panels, so they needed bright and powerful luminaires and the set pieces also contain lighting, adding a further layer of depth.

Rodman first looked at the potential solutions offered by Robe after consulting with Brent Hageman, head of lighting for the Las Vegas show who joined Blue Man Group in 2014. Based in Las Vegas since 1998, Hageman has had plenty of opportunities to see demos and lights in action, and to compare the different and current lighting trends and technologies. With the move to the Luxor now imminent, they both discussed the idea with Adams. 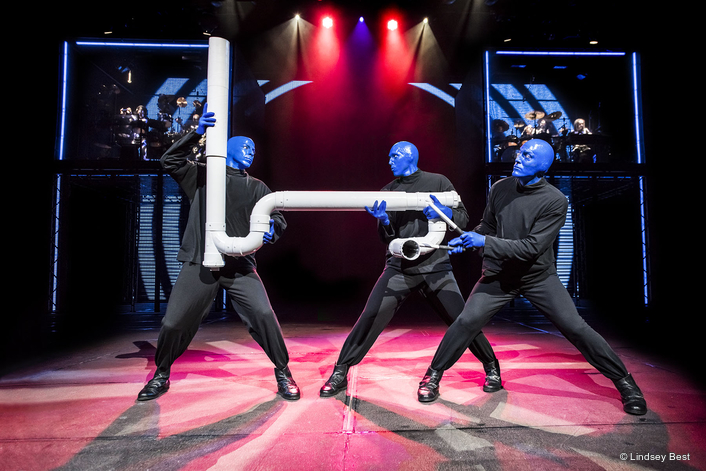 The MMXs are the backbone of the rig and are used for all the specials and key lighting, as well as bringing the general brightness and impact needed to work with the multiple LED surfaces. The LED Washes add another layer of luminescence to the show, with the tidy LEDWash 300s framing the pros arch and radiating energy out into the audience.

“I was thrilled with the color range and effects of the Robe fixtures” observed Adams, “they can create a dark blue that is really special and that I haven’t yet found in any other LED fixtures.”

Set, lighting and video are all designed as a visual collage of contrasting media helping provide the all-encompassing Blue Man Group ‘experience’.
Robe’s Cyclone – a fan integrated into a moving LED head - was a project developed with LD Scott Warner, and the way Blue Man Group uses these is a great example of their versatility.

Two of the 10 Cyclones in the show are being used for the standard function of coloring fog. The other 8 are fitted with a removable sleeve – in collaboration with the prop department –that contains a colored silk fabric ‘dancer’ … which creates amazing effects for the finale when combined with the pixel mapped Cyclone LED ring.

Rodman oversees implementation of all the creative lighting elements including all installations and getting-in, tech’ing and programming of the various shows which currently includes residencies in five US cities – Las Vegas, New York, Chicago, Orlando and Boston plus a U.S. tour; a long run in Berlin and a new world tour that just opened in Singapore.

Once a show has opened, she works alongside with the various head electricians and their teams to ensure the integrity and continuity of the lighting design is maintained in all cases. 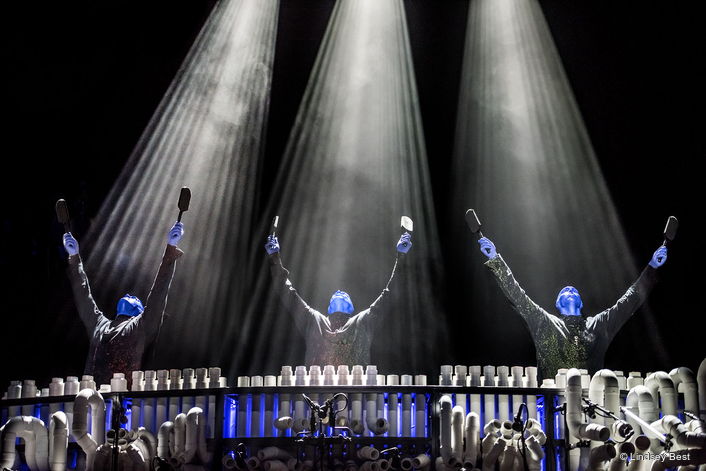 As a result of the success of using the Robes in Las Vegas, Blue Man Group is now upgrading some of its gear in the Orlando show to include Robe’s MMX series.

At the Luxor, there is a ring of small 3-color LED units around the pro arch that can create special and graphic effects, and for the tour, Adams wanted a similar effects but something with a lot more impact for some of the larger arena venues they will be playing. The new Robe ColorStrobes are perfect!

Twenty-seven ColorStrobes are hung around the proscenium truss pointing at the audience! “They can strobe in multiple colors and glow in different configurations to make a variety of different light frames around the stage,” explained Adams who is delighted with these aesthetics.

“They make a spectacle and can also act as quick-change scenery” he said, adding that they also use them as wash devices to light the band

“I absolutely love these Robe ColorStrobes, they are so bright and dynamic … and can’t imagine this tour going out without them,” stated Adams.

Likewise, she’s been struck with the adaptability of the Pointes which are used for many tasks on the new touring production, from dramatic in-air effects to more straightforward key lighting. 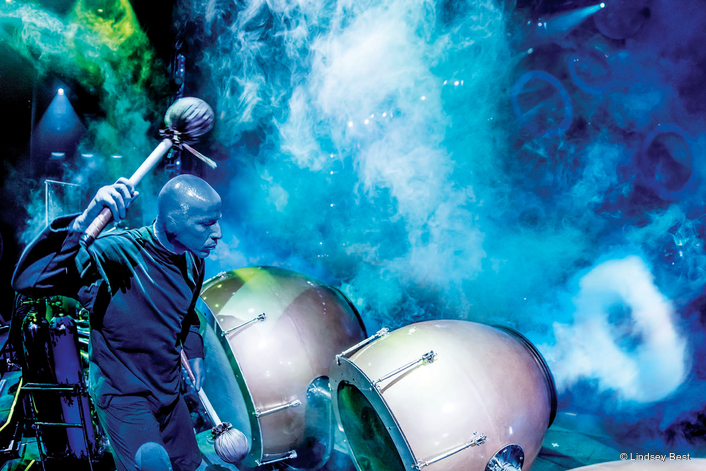 They use lasers on the Vegas show and were looking for a lighting unit that could replace them, for which Pointes have proved “ideal” said Adams. In addition to authentically simulating the thin lines, flared beams and stretched cones of the lasers using the prisms, the Pointes are also used as wash units and specials in the show.

Adams appreciates their very fast movement, intensity and rugged build, “I look forward to using them on Broadway more often,” he concluded.

The biggest task for lighting a Blue Man Group show, Rodman elucidates, is finding a perfect balance between lighting and video while maintaining the principal character and his story, all the time sweeping the audience along. She enjoys many things about the shows including the uniqueness of the Blue Man Group performance environment and how it’s always evolving into something new, challenging and different.

On the operational front, Hageman states that the reliability of Robe was another big factor. In Las Vegas in particular, the show runs 7 days a week, two shows a day with three performances a day during peak time stretches of one or two weeks … so it’s absolutely essential that the kit is rock solid.

The service and support from Robe North America is “exceptional” even though he’s not actually needed much ‘support’ as such, but “when I do have to reach out, even if it’s out of office hours … the response is pretty much immediate.” 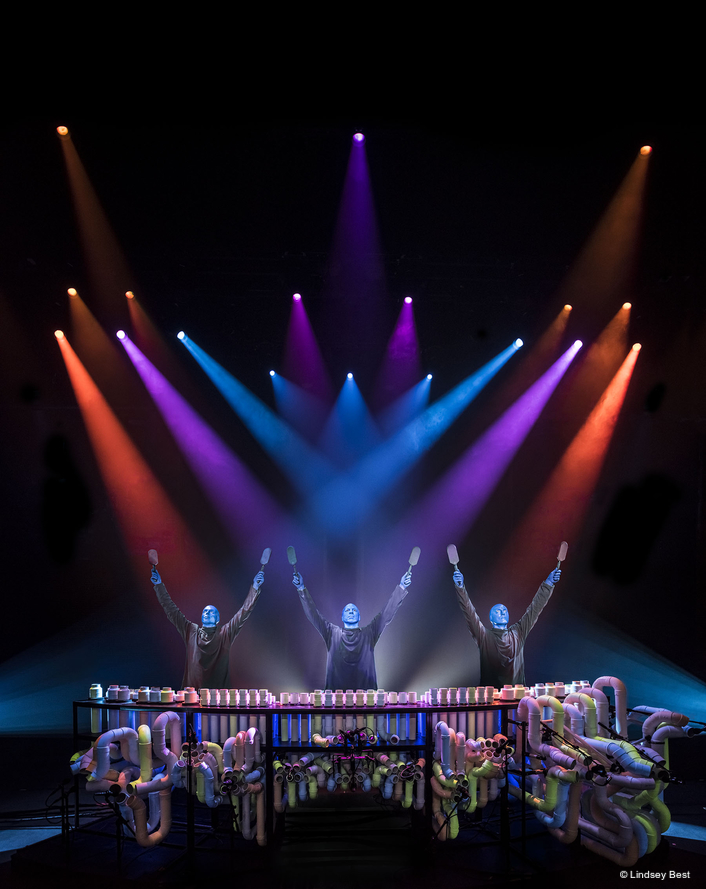