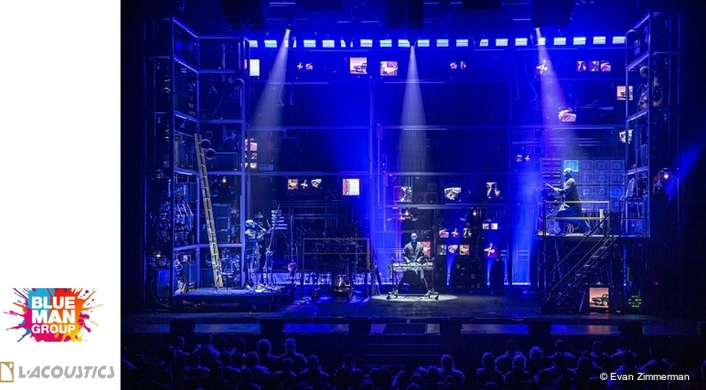 The singular, award-winning Blue Man Group has taken to the road, and is taking immersive sound along with it for the first time. The group’s current North American Tour officially opened this past September at the Hollywood Pantages Theatre in Los Angeles, after developing the production at Fayetteville, Arkansas’ Walton Arts Center. The Pantages show marked the first of more than 50 cities across the continent that will ultimately welcome the tour in its first season. 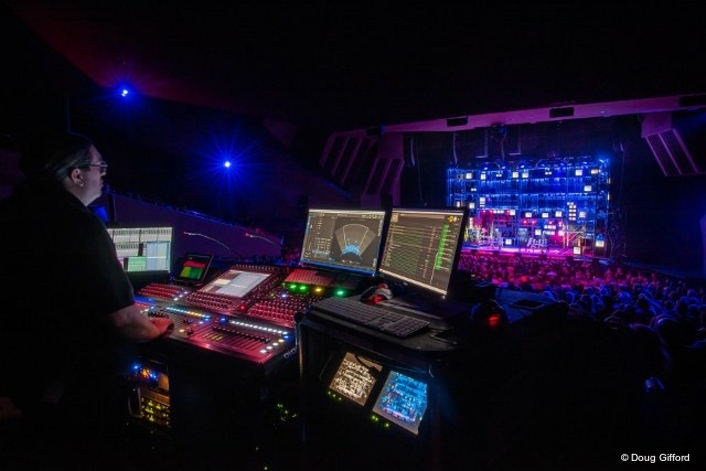 Showgoers will also experience L-ISA, L-Acoustics’ remarkable immersive-sound technology—also an award winner—which Blue Man Group North American Tour Sound Designer Tony Pittsley says literally puts the audience onstage with the show’s three ironically comic and palpably percussive performers. “With L-ISA, the sounds of the show can move around the stage and the room and appear to come from where they’re supposed to originate from, which engages the audience way more deeply,” he explains. “You don’t feel as though you’re sitting there watching a show as much as you’re feeling enveloped by the experience.”

With L-ISA, audio elements are now literal objects that can seamlessly move throughout the performance space along with the performers and the narrative. The L-ISA Controller provides key parameters for each object: Pan (horizontal location), Elevation (vertical location), Width (the size of an object), and Distance (perceived proximity and reverberation), and L-ISA can manage up to 96 objects and up to 64 physical speaker outputs at a sample rate of 96 kHz.

To bring this to life, L-ISA Immersive Hyperreal Sound utilizes a specialized configuration of speakers in order to achieve precise localization within three dimensions. For Blue Man Group’s trek, the system comprises five hangs of ten Kara for the frontal system, with two hangs of four SB18 subs each deployed in cardioid configuration flanking the central Kara cluster, as well as eight X8 coaxials as frontfills, eight more X8 as underbalcony speakers, and four ARCS as outfills. Twelve LA4X amplified controllers power the main hangs and frontfills, while eight LA8 drive the underbalcony speakers and subs. 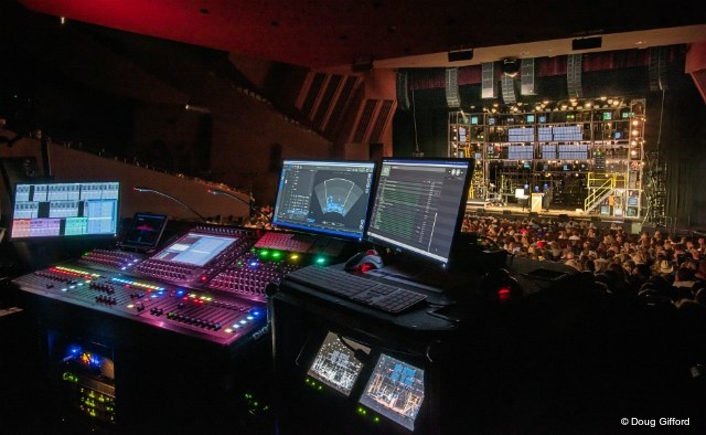 Pittsley, who programmed the L-ISA technology, says it’s incredibly intuitive, and that that’s what makes L-ISA such a pleasure for both the engineers who operate it and the audiences who enjoy it. “With a typical left-right or left-center-right PA system, if you move, say, a vocal slightly to the left of center, you’ll notice it move from speaker to speaker by the change in volume from one side to the other,” he says. “With L-ISA, the sound isn’t dependent on speaker location; it’s moving around in the entire space. So it’s connected to what’s taking place onstage as that action moves, and not to the speakers.”

Pittsley says that lets the mixer move any of Blue Man Group’s percussion instruments not only right and left, but also up and down and forward and back. “So if the drums are in the right-hand corner of the rear of the stage, we can move the sound of the kick and snare upstage to exactly where they appear on stage without changing their relative volume. I can walk through the house and the image holds together. This isn’t traditional panning; this is a great leap forward from that.”

The combination of the L-Acoustics Kara PA system and the DiGiCo SD10T mixing console creates a powerful and flexible ecosystem for the tour, one that can translate to any performance location. The show at Blue Man Group’s original venue, Manhattan’s Astor Place Theatre, where the group debuted in 1987 and where that production has been ever since, uses a DiGiCo SD12 console. Pittsley notes that the show’s settings were able to be transferred from that desk to the touring SD10T seamlessly, adding another level of authenticity, something that touring versions of shows strive for. 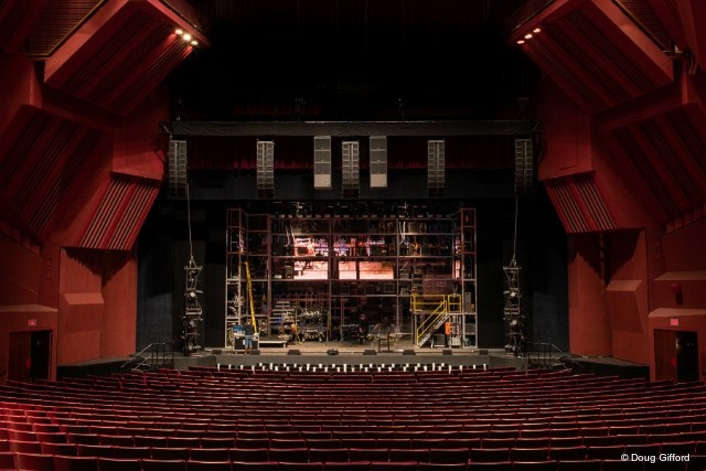 This ecosystem also makes the mixers job easier. “The L-ISA Processor and the console can talk to each other via L-Acoustics DeskLink; for instance, they can exchange updates to the channel-structure process. And the L-ISA GUI is very representational, just like the SD10T screens, so they’re all very intuitive to use. It all makes the entire process much more efficient.”

The current tour is FOH Engineer Justice C. Bigler’s first encounter with Blue Man Group, as well as his first encounter with L-ISA, and he was happily surprised at how quickly and easily he became familiar with both. “The L-ISA Controller is very well designed and I was able to set up quickly and become familiar with it while Tony and [Blue Man Group Sound Designer] Marcus Ross were programming it,” recalls Bigler, who was previously head of audio for the Tulsa, Oklahoma Performing Arts Center. He says that L-ISA gives theatrical mixers a way of enhancing a stage narrative that they’d never had before.

“Blue Man Group shows don’t have any dialog—the action tells the story,” he explains. “L-ISA lets me put the sounds where they need to be to reflect where that action is taking place. It lets me build a soundscape that matches and complements the show itself, and put the audience in the sweet spot no matter where they’re sitting. And Kara is one of my favorite sound systems—easy to carry and rig—so they’re hearing great sound, too.” 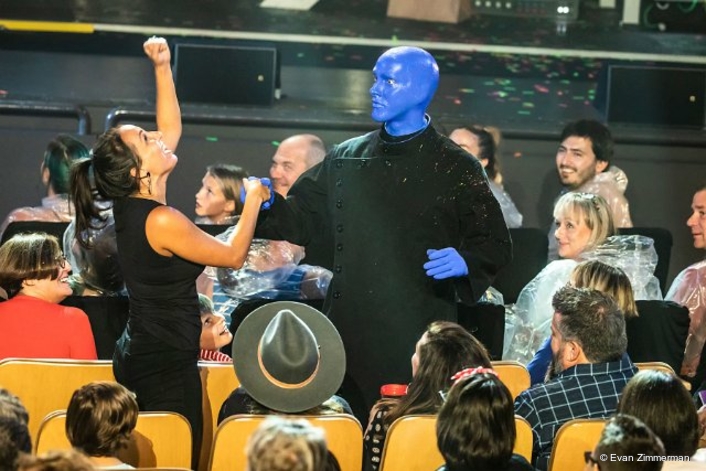 The Blue Man Group North American Tour is a brand-new show, with mostly new music. The ability of L-ISA to interact with the SD10T console via L-Acoustics DeskLink and be a part the automated production being scripted by QLab automation and SMPTE time code also helps to make it an inflection point in theatrical presentations. “This wasn’t a case of taking an immersive sound system and putting it on top of an existing show,” Bigler stresses. “The show was literally built with immersive sound and L-ISA in mind.”

Adds Pittsley, “Blue Man Group really changed theater three decades ago, so it’s fitting to pair it with L-ISA, the next generation of live sound.”